Country Water, no relation to Road Soda, part I 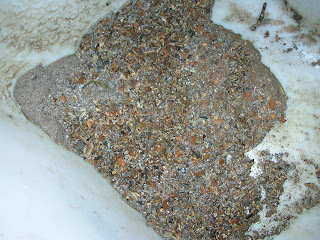 Water: the universal solvent, and nature's life blood. Both of those things sound so euphoric, unless you want to drink it. Our house has a well and a septic system, although the septic doesn't really work. We recently bought a water softener, which I installed today. What this amounts to is a mini version of what all you city folk take for granted, a water and sewage treatment plant. Before we bought the house we had a thorough home inspection, including three water related tests: well flow, septic dye, and water quality.

The well flow test was a waste of money, all our inspector did was calculate the maximum expected usage (100 gallons per bedroom plus 100 for the house) then he put a 1 gallon bucket under the elephant in the bathtub and counted out a minute, to calculate the flow (3-5 gallons per minute, GPM), then he left it running until 400 gallons went through it. If the pump blows up, or the elephant starts spewing dirt instead of water you fail. $40 down the drain. We passed with flying colors.

The septic dye test would have been worth it, if our septic system didn't just pump our piss water into the ditch by the side of the road. The inspector pours a bit of yellow dye down the toilet, then waits while all the water from the flow test runs through the system. When that's all said and done you walk around the property and look for dyed grass or wet spots. All we had to do was look in the ditch. $30 in the ditch, as well as my foot when I accidentally slipped.

The water quality test was the best bargain because a third party, the testing lab, was involved. they tested for Coliform bacteria and E. Coli, we had Coliform but no E. Coli. Being positive for Coliform is interesting, because Coliform itself is not bad for you in any way, it is considered an "indicator," easy to test for and if it's around other bacteria that are worse for you, and also harder to find, are usually present as well. $30 "well" spent.

If we were getting a conventional mortgage then both of these failures would have killed the deal, but lucky for us it didn't matter one lick to our financiers if our shit went in a ditch and our water was unfit to drink.

over the last month we developed a list of water related problems we'd like to solve:
* Get Coliform bacteria out of the water
* Stop the hot water from smelling funny
* Eliminate the dissolved iron in the water, which stains our plumbing fixtures
* Reduce the water's hardness, which makes us use a ton more soap than usual, dries out skin, prematurely ages fabrics, etc.

I think I've solved all four in the last week, but only time will tell. Over the coming weeks I will explain my solutions in a series of posts. I want to include as much information as I can, and at times it can be a bit technical so I thought I'd spread the load. Here's a teaser for you though, can you guess where I found all the crud in the above photo? There was more than a gallon of it., click on it for a closer look. Goes to show that you never know what you'll find when you look, just ask Lester Freamon.