Ok, so when we last talked I had identified four problems with our water:

Like all complex problems, these were broken down into pieces and dealt with. When we discovered mice living in our walls and decided we didn't want them there, we poisoned them. Same goes for the Coliform bacteria. BUT, no use poisoning them if you leave the front door open right? 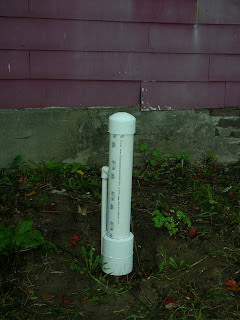 First we had to raise our well head. Presumably the bacteria made their way into the well when some part of some animal fell in, could have been a foot or a poop or even a rotten sock I suspect. Wells are just long steel tubes that go down into the earth until they hit the water table. There's a pump in the tube, conveniently placed below the frost line, and then the top of the tube, the head, is left exposed in case you need to service anything in there. Smart people put the head far above ground level, so when it rains the yucky run off water doesn't end up in the well, of course this was not the case in our situation. Our head was buried about 3 inches underground, with a pop bottle jammed in the top so you could pour stuff into it if you felt like it. Also, if Ursula felt like it she could drop a rude dooker down the well too, although she was nice enough not to. the photo above is our new and improved well head. Using PVC I extended the well head about 3 feet above the ground level, a few nerdy well nerds on the web and in person scoffed at the idea of using plastic instead of steel, but all it is is a water proof hat, I could have made it out of any impermeable material I wanted and PVC was cheap.

Now that the proverbial door's shut, I dumped a deluge of poison down the well, bleach to be exact. 4 gallons, then turn on the hose, point it down the well, and let it circulate for 30 minutes. Add more bleach, rinse and repeat. Crack all faucets and outlets in the house (I accidentally forgot the washing machine) until you smell the bleach and leave it be for 8 hours (we did this right before bedtime, on purpose.) In the morning we ran all the taps until the water was odor free, and we're in business. The whole process is called shocking the well. Conveniently, this was also part of the solution for the smelly hot water, but that's for next time.

On an unrelated note, I'm glad everyone liked the grey kitten so much, the views of his photo are the highest of all photos on the flickr page. Maybe I'll have the time tomorrow to dress him up for the holiday.