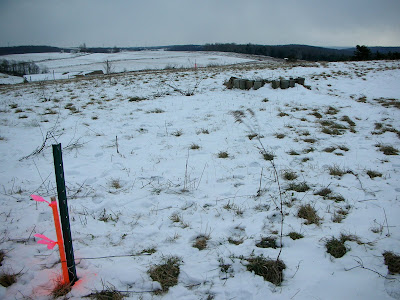 You all should remember the epic barn cleaning debacle, which resulted in a burn pile in our upper pasture. It was quite large.

Well, one Sunday morning before I even had a chance to troop down the driveway for my Times, a Department of Environmental Conservation officer, complete with reflective, wraparound sunglasses, stopped by our house. Seems that our next door neighbor (who is only actually next door one weekend every two months or so, as he lives in Albany full time) was around for a rare weekend, and upon walking into the yard behind his house, found our gigantic pile, still awaiting the approval of the Lisle Fire Department to be burned. It also turned out that this neighbor was damn certain that our pile was on his land. This slight misunderstanding was rendered infinitely more horrid by the DEC officer's proclamation that burning regulations had changed the week (the week!) before we had piled up our burnable pile, and that none of it was now burnable. Nick had a sit down with the Angry Neighbor and the DEC Sunglasses, looked at some tax maps, and while still relatively sure 90% of the pile was on our land, he agreed to move the pile to the dump. And the DEC officer agreed to not fine us thousands of dollars.

This resulted in a very grumpy Tuesday, when Big Man and I got both our truck and our trailer stuck in the mud trying to get it up the pasture hill to load up the garbage. And, after we borrowed a real champ of a truck to haul them both out, we had a very grumpy Wednesday in which we had to load the 1.8 tons of paper trash into the trailer. I also had a cold and was certain it was the swine flu.

So. Apparently this was not quite good enough. Just this last Sunday the Angry Neighbor called out a surveyor. I thought this was endlessly odd, since he doesn't do anything with his yard, and we don't do anything with our pasture...it's all just overgrown grass. But people REALLY care about where their weeds end and yours begin. I'm not used to that yet. Anyway, the poor Angry Neighbor ended up learning that the property line was about 35 feet over from where he thought -- meaning out trash pile had been entirely on our land. And the Angry Neighbor's fire pit was also on our land. And we had more land than we thought (including some lovely little spruce trees).