Some Local Stories About Roads 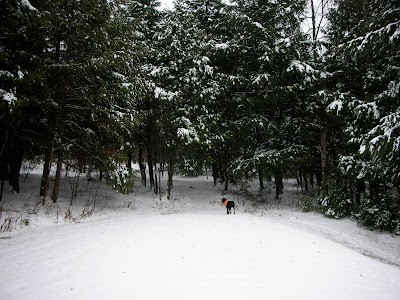 Well, it pretty much feels like winter now. I am baking for the holidays, and as the Big Man said, we've shoveled the drive and celebrated that success with hot cocoa. Large-scale outdoor projects are closed for the season, and we think we're in pretty good shape for hunkering down this winter.

Joel Salatin, farmer extraordinaire, described his annual cycle as a summer blitz of dawn to dusk work, and a slow winter, with time for reading, writing, and planning the next season. Winter is story time, so here's a couple local stories, about roads.

Well, the first one isn't so much a story as a picture and some conjectures. I'm sure it's an awfully good story, but we don't know it. Many of you know that we live right next to Squedunk Road, and have expressed appreciation for its name. Well, perhaps there is a local dispute about how to spell it, because its street sign, which was the standard green found everywhere, has been doctored. 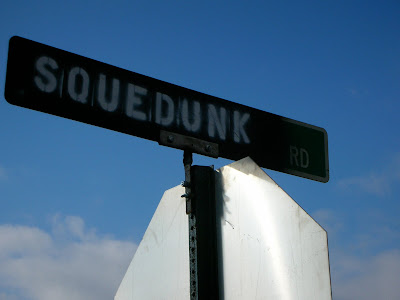 I can't for the life of me remember what the sign said before, but I thought this fix was pretty nifty.

The other story is about a street in Whitney Point. Whitney Point is the larger small town in the area...it's where we go for Chinese food, the liquor store, and other emergency groceries. It has a Main Street, a Park Street, and 114th Street. We found this mildly amusing on one of our first cruises through. Some time later, we found ourselves in the back room of the Whitney Point library, talking with the town historian. She told us that in the 1920s some kids from W.P. went to New York City (she impressed upon us that this was a big deal), and as part of their wild time there they stole a street sign from 114th street. They brought it back and stuck it up at the end of their street in Whitney Point. This was extra-amusing, the historian said, because no other streets in Whitney Point had street signs, or official names. The stolen sign stayed, and the street was officially named 114th street.

So, take that NYC.