It's occurred to me that some of you readers may not be totally up on the path we walked along to get to where we are. I can be piss poor at keeping in touch, and I know Johnson has her lazy moments as well. I'm going to try to keep things short, I have to cover at least four months.

Johnson's masters program, in Islamic studies, was due up in May of this year. Neither of us were particularly fond of Chicago as a city, although our friends there were stellar and there are many friendships that were just starting when we left, ones I hope I'll have a chance to develop in the future. That being said, we were ready for a change, and we'd always planned on living rurally. We decided to move back to Philadelphia for four years, buy a place, save up some money and move to the country as our next step. I had an exciting job at a school I liked, and Johnson could find work doing something at least vaguely related to the degree she just dropped a mint on.

Then I didn't get the job, and we got to thinking about whether the intermediate city phase was necessary. We determined, through careful calculations, that we had enough savings to take the risk so we jumped in with both feet. We moved from Chicago the second week of June, a comedy of errors in and of itself, and shacked up with Becky's parents in Youngstown, OH while we figured our shit out. We had decided to look in three geographical areas, Western MA and CT, Eastern PA and central upstate NY. We picked the first two because we'd be within 50 miles of a major city or populated area where we could hopefully market our wares, and get jobs in the meantime. We keep the Ithaca region as an option because people around here are coo coo for local sustainable food, and we're still within the radius of the NYC farmers market system so we'd have marketing options. I contacted realtors in all three areas. Our stipulations were simple: less than $150,000, at least 5 acres of tillable land, and no manufactured homes. We were priced out of western CT instantly, none of the 10 realtors I wrote to or called would get back to me. I had a few fish on the hook in PA, but that waned quickly as well.

Not to go off on a tangent, but realtors suck. They're useless. I don't mean to offend, but even within the Ithaca area EVERY property we saw I found a listing for on the internet. Every single one. We worked with three realtors, since they won't drive more than 15 miles from their office, and all they were good for was knowing the combos for the lockboxes. You're telling me they deserve 3.5% for knowing how to open the door (I even had to help them figure out the door locks on at least three houses)?

We ended up spending two weeks in July at my Aunt Pam's house up in Lodi, NY while we looked about. We saw a total of 36 properties, if I remember correctly, and ultimately settled on this nice little parcel I'm sitting in. The house is old, at least a hundred years, and it's showing it's age in a few ways. All in all, it was the most acreage and the best barn for the money, and the house is very serviceable, for the most part it's square, level, plumb, and true. I just roughed in 19 window openings and I only had to shim more than a 1/2" over 5' once, don't know if you can say that about many 40 year old homes let alone 100 year old ones. The property is covered in trash, to the point that I have trouble verbalizing the scale. We've already dropped three tons off at the dump, a lot of it demolition waste, and I wouldn't be surprised if we pulled another 20 tons out by the time we're done. Here's a picture of the upper barn, to give you an idea. 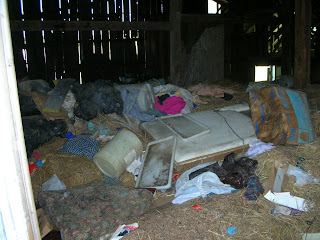 It's hard to tell, but that general refuse is atop about 2 feet of rotted hay. I plan to scrap the metal I can, burn as much paper, cardboard and wood as I can find, sprinkle the hay around the field like I'm Tim Robbins in The Shawshank Redemption, and then pay to haul away the rest. The county only charges $40 a ton for whatever I bring 'em, so I'm not complaining.

We closed on 9/11, the day the world changed, ultimately paying $115,000 for the property and around $3500 in closing costs. Our property taxes are about $2300 a year, so after our mortgage payment (~$600 a month) and our homeowners policy (~$600 a year) we still come out below what we were paying to rent a relative postage stamp in Chicago.

finally, I realized that not many people know the origin of our nicknames. I hope it's not too cutesy, but Johnson seems to have stuck pretty well to Becky, a few friends call her that exclusively, and I figure I should suffer the same fate. So, without going into the ooey gooey lovey dovey details, here are the two videos that can explain it all.

This one's a one hit wonder:


This is part of a series, if you haven't seen the entirety of R. Kelly's Trapped In The Closet, you haven't lived.


Last but not least, this post was inspired by a question from a friend, and while Johnson seems quite content to post based on our regular Goings on, I tend to find that somewhat banal. If you have a question or something you'd like me to expound upon, drop a comment.