Ah yes, the "no buying processed foods" thing. Well, taking a lesson from the government, we quickly decided that the ongoing Wars on Mice, Trash and Substandard Home "Improvements" were going to take too much time and energy for the somewhat lofty idea of making our own, say, tortilla chips, crackers and cereal. At least until these fronts are stable, we may slip a box of mac and cheese and a jar of pasta sauce into the cart every once in a while. First we win in the Afghanistan of making our house smell nice, THEN we take on the more ideological, less pressing Iraq of the food industry. 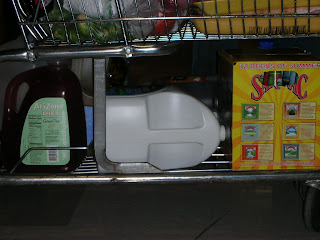