And it has come to this: a rather predictable, but completely necessary, troop surge in the second year of the War on Mice. Times were dire. 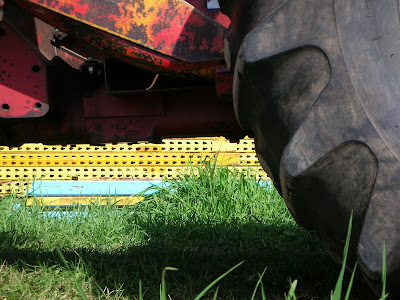 In the house, tomatoes, set out to ripen, developed mysterious tiny bites, one to two per otherwise prefect tomato.

The assumed mouse in the kitchen turned out, when Big Man caught a glipse in the pre-dawn hours one day, to be larger than mouse-sized, and tan. I, choosing not to assess other possibilities, assume it is a chipmunk. Driven to shame and despair that a chipmunk manages to live in the kitchen and share my heirloom tomatoes, drastic steps were needed. Drastic, impossible to photograph steps. 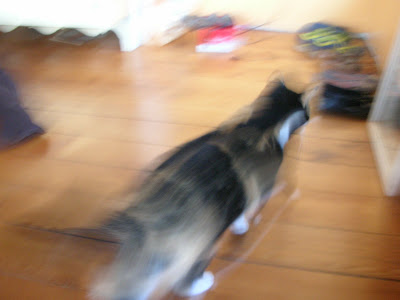 This is Zoë, our new house guardcat. She is a little calico who had somehow been stuck at the SPCA for over a year. Apparently calicos have a bad wrap, but Zoë has been all curious sweetness since we got her. And, she auspiciously likes chasing things that move. 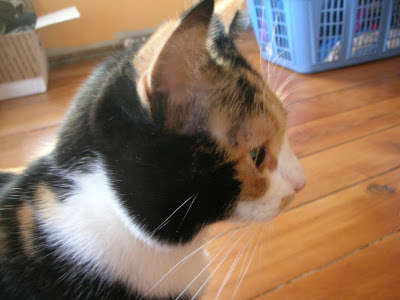 The barn, of course, presents its own, more varied, challenges. There are the mice and voles and chipmunks. Then there are the pigeons, and the shockingly large flock of finches that seem to have made it a daily snacking site. Not to mention the horribly invasive spring barn swallows, the possums, the etc.

For these ruffians, we took cats that most people wouldn't want in their houses. Nichol Fritz is a big gray manx who is exceptionally shy (they kept him in the "shy cat room" at the shelter) and, according to his records, doesn't necessarily prefer a litter box to drapes. Dubious, since he seemed to understand that whole thing in the shelter, but it was probably enough to scare off a year's worth of customers. He is big, healthy, and . . . well, good at hiding. 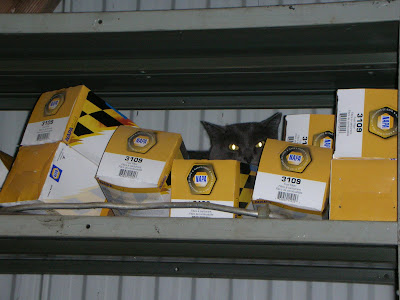 We also took Lisa Marie, a shaggy lady who is "a total bitch" according to the shelter manager. When the cat-obsessed volunteer objected to this characterization and tried to prove that you just needed to approach her the right way, she scratched the shit out his hand. It seemed to make sense to put a strong, brave, territorial type with a shy and able follower. 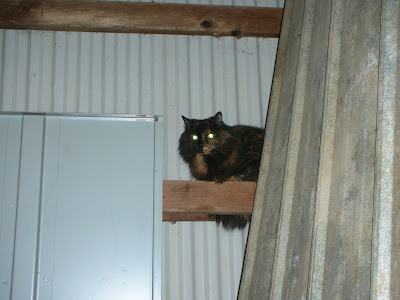 So far they have done nothing but sit on the shelving in the corner, trying to blend in with the fuel filters. No one has even ventured near the food, water, tuna (!!!), litterbox and beds we made for them in the stall we plopped them in their first night. In fact, we thought they'd run off when we looked for them in their room the next afternoon, only to find their quarters abandoned. It took us awhile to look at the shelving. A flash camera helps. 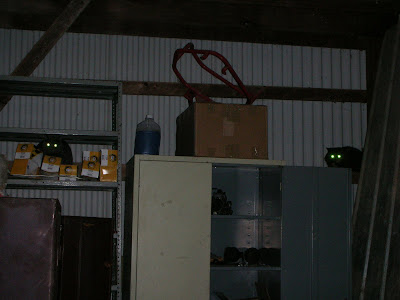 Despite their trepidation, it is encouraging that they seem to like being close to one another. We wanted a bonded pair for the barn, and while these two were not siblings or even friends at the shelter, they are at least familiar with one another, and Lisa Marie's presence was enough to coax poor Fritz out of the tiny space he had wedged himself into the first morning to be closer to her. When something terrifying happens (the tractor drives in the barn, for example, or a person shows up) they move closer together.

As for the finches, etc., they haven't yet seemed too concerned about the new feline presence, but hopefully the felines will some day venture down from their shelving units to prowl about like proper carnivores.