Crime Scenes (and a lack thereof)

Crime scenes are a fairly common event on the farm. There was the murder of the noble Hyena Cat. There was the (murder/suicide?) of Skittish pig. There was a missing mallard (the leading theory still, optimistically, that she flew south for the winter, and will return happy and fat in the spring). A drowned duck. A drowned turkey. A turkey with a limp, suddenly in three motionless pieces. Not to mention that a pig was shot, and a duck and ten chickens had their heads cut off. Some deaths became mysteries; some became food, some became compost, and some became art. 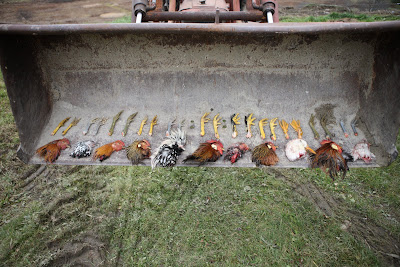 Two mysteries in the past couple weeks. First, one of the two surviving ducks*, a cute little Buff Orpington, disappeared. It was obvious that something dramatic had happened, both because the morning of her disappearance her entire team (which includes the geese and the turkeys, as well as the other duck) was found milling about agitatedly in a spot they'd never been before, and because of the amount of downy, waterproof feathers strewn about near the feeder down in the pasture. 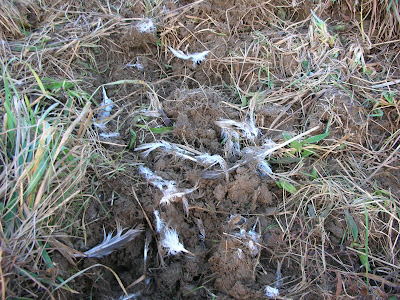 It made a bit of sense. The chickens hole up in their coop at night. The turkeys sleep in a pile or a line, off the ground. The waterfowl simply sleep in a pile in the weeds. The compost pile had been dug through. The top two wires of the fence gate had been unattached. A rather obvious predator/prey situation.

And then a goose went missing. In the middle of the day. Leaving not one feather, not one head or foot, not one spec of blood as a clue. Ditches were searched. Potential nesting places were sought. Lisa Marie, the barn cat, was eyed warily. Nichol Fritz, the invisible barn cat, was scowled at in absentia. In the end it seemed unlikely that a cat would be responsible. Especially since there are other, far, far more obvious candidates. 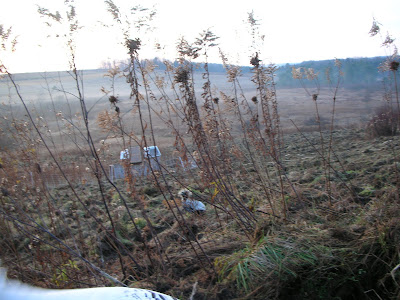 It makes no sense, really. But farmers can easily drive themselves crazy over-analyzing a crime scene, wondering what happened to this piglet or that sheep. And it's important to make little changes to improve the mortality rate at the farm, but a fair amount of death and mystery is unavoidable, and one of the challenges of farming is finding a good middle ground between caring for your animals and letting nature take its course. So, for now, the goose becomes just another mystery. And we have only two funny, odd water birds remaining. Who are about to get more lonely still. 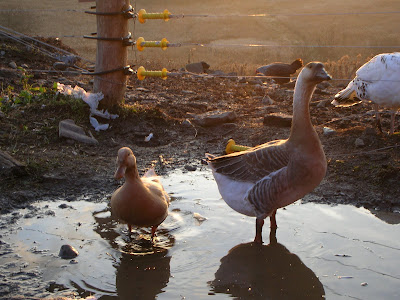 *We have done horribly with ducks. Out of seven ordered, one was dead on arrival, one died two hours after arriving, one drowned as a youngster, one disappeared without a trace, one sacrificed itself to the freezer, one disappeared in a flurry of feathers, and one is lonely.