The Death of Stump 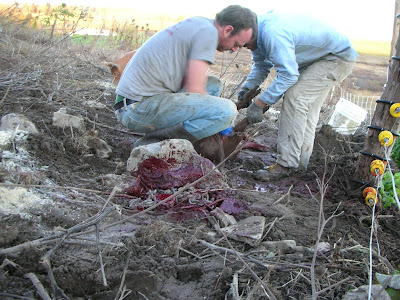 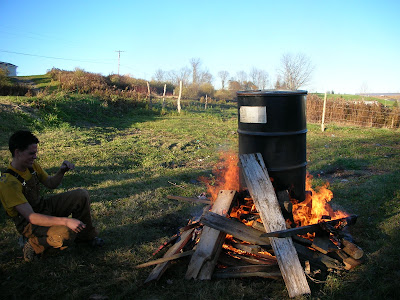 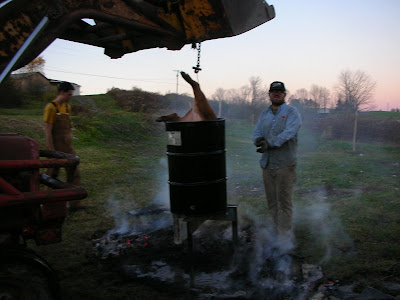 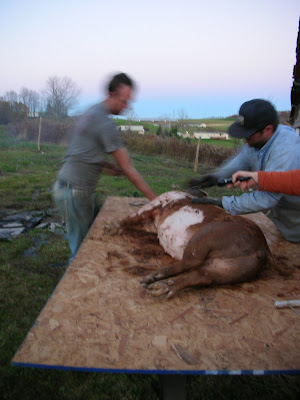 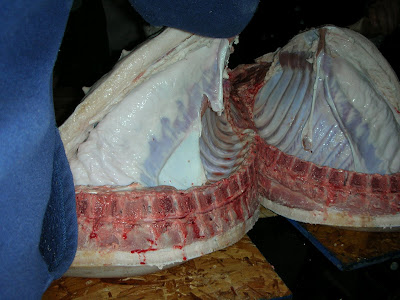 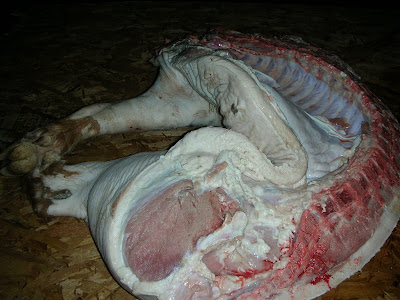 The body becomes meat bizarrely quickly, practically as soon as you get it upside-down. Legs become hams, feet become trotters, backs become back fat. The air smells like meat. Once the animal is cut open, onlookers are amazed to see how tenderloin fits into the pork chop, how French butchery keeps the muscle groups together, how these pork chops are so strikingly different from the shrink-wrapped boneless varieties in supermarkets.

I, erstwhile Friend of Stump, experienced it all with an odd sense of detachment. Stump was eating, Stump was shot; Stump moved and then stopped moving; Stump was Stump, then Stump was an interesting event. Adrenaline prevents processing the event as it is happening. One hopes for a clean kill, and one is happy that one is provided.

After adrenaline, with a freezer full of incredibly delicious-looking cuts of meat, I try to decide how I feel about the whole thing. This, I am still in the middle of. I think of how, until a scant two hundred years or so ago, this is how most everyone procured meat -- through witnessing (if not actually themselves enacting) the death of a very large mammal. In slaughtering Stump it was the very mammal, in fact, that people dissect to learn about what humans look like inside. During pig dissection in high school, I had actual nightmares that consisted of fetal pigs raining down on me, in a fetal pig coated waste land.

So, I kind of expected the worst.

Instead, I feel oddly vindicated. Here is this pig, one of six original pigs, that I made oatmeal for, carried daily apples to, nursed back to health -- she was actually the first pig that we named. She died quickly and perfectly. She became an entire winter's worth of pork. Out of 210 pounds, only the digestive system and three quarters of a 5 gallon bucket became trash. And not even that -- those bits will compost in a pile of hay, and be added to my garden in years future. Turns out, the only part of the Stump to meat process that I keep dwelling on, is how odd and unfortunate it is that we had to do it in a small group of five (utterly amazing) folks, and how I kept getting this nagging feeling that we were doing something incorrect by driving a pig around chained to the tractor bucket, dipping it in a scalding bucket over a wood fire near the road, and butchering it on a wooden table in the barn. When really, this is much closer to the way it should be. The eater should see the animal alive, and inspect all the innermost bits, and be expected to provide a swift and painless kill. Friends should do this together, learning and talking and sorting through both thoughts and cartilage, and the process should eventually become ritual.

And also, the teeniest bit of homebrew should perhaps be discreetly poured on the ground, so that even in the midst of the adrenaline, there is the recognition that this is most likely a solemn thing.