So far, the lovely hen who has started laying has given us three eggs in five days. We think it is only one hen laying -- all the eggs are identical. I spent some time this morning trying to determine if one of them was more puffed up than usual, being haughty, but they were all equally puffed, equally haughty.

Since the laying has started, I've been tinkering with the chicken coop, trying to make it cozier and thus the nesting boxes more alluring to the ladies. I spent the morning at work trying to balance an account, but failed, I'm sure because I was severely distracted mentally designing a secret swinging trap door to allow easier human access to eggs, while maintaining a cozy clean little spot for hens. I can almost see the Big Man's rueful grimace at this. I am mostly sure that the phrase "designing a secret swinging trap door" would never leave the lips of anyone with any real building experience. Ah well. 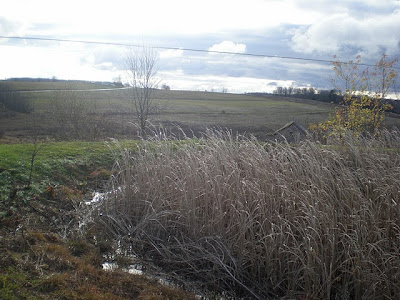 In further happy bird news (and I say this quietly, so that god, or fate, or whoever it is with the twisted sense of humor who likes to make people regret sentences just like this one, won't hear) the waterfowl-munching predator seems to have moved on. I have an aunt who has shot her share of foxes with .22's (hi, jo!) and she said that her foxes usually come back every 3 or 4 days for a new kill. A fox was the prime suspect. We are now 8 days death free (I want to make a sign, like the have in factories. "Days without on farm mysterious maulings or accidental deaths: 8"). 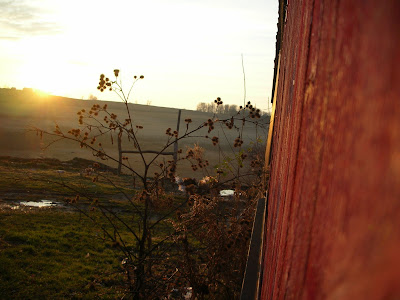 Mostly we've been spending the last couple weeks frantically trying to get things buttoned up for the winter, and being stymied at every step by nothing more complicated or nefarious than mud. We have plied our gigantic-tractor-having neighbors with budweiser, so that our regular-sized tractor can be extracted from the swamp that appeared overnight in the middle of the pasture, as well as the suburban that, turns out, cannot tow a tractor out of the mud, preferring instead to lazily bury itself to the axle in said mud. We are downsizing our "to do before winter" list, and that's fine.

Also, finally, here is a link to some pictures of the Feast, taken by Nick Johnson, a stellar individual and equally stellar photographer.