Complications from a Cold 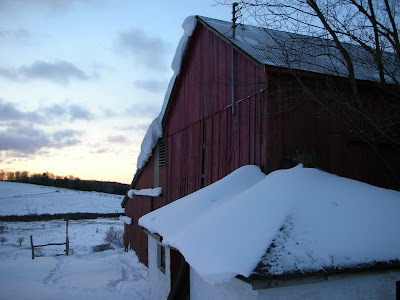 Sorry for the lapse in posting; we've been a bit under the weather (and I mean that literally) here at the farm these past couple weeks. Winter, this year, was unusually ambitious in our area, spiraling temperatures 20 degrees lower than average and dumping over a foot of snow on our blustery hill, snow which mounded up into thigh-high drifts exactly where I need to walk (or, worse, drive), up the side of the chicken coop, and into the pig pen. Old cars, like old bones, refuse to start up quickly in the morning (or at all). Hands can't tinker without gloves for more than 30 seconds without getting cold and numb, which in turn leads to a dropped nut or bolt into the snow, lost until spring. The barn well freezes every few days despite a heat lamp, the pigs' water tub needs bashed violently with a hammer multiple times a day, the murderer has moved back in upstairs, and there is of course much fretting on my part about the comfort of our outdoor beasts, be they cloven-hoofed, feather-coated or feline. 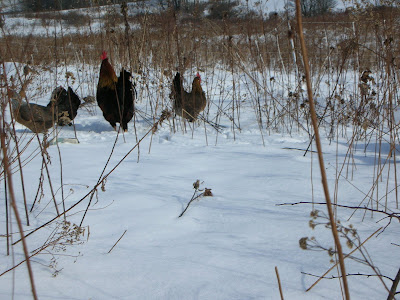 But, it turns out that humans' ridiculously small window of comfort (40 to 90 degrees or so, I figure) does not translate to all other animals. After all, I don't worry about the chickadees, or the rabbits, or whatever it is that has moved back in above the kitchen. In fact, after two weeks of prolonged frigid temperatures, everyone seems to be doing just fine. The pigs bury themselves in their hay pile inside, mounded up, and do a lot of sleeping. But they also manage to still root about in the muddiest, unfrozen bits of the pasture, seemingly oblivious to any need for smart wool, hot chocolate with a pinch of bourbon, or heated blankets. 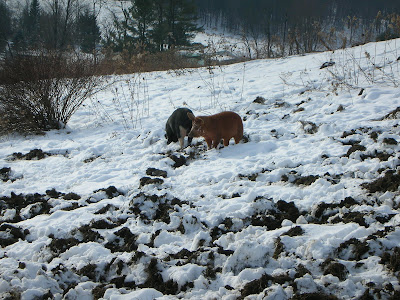 The chickens spend most of their time in the coop, skittering out once in a while to eat and poke about in the snow. But, three more hens started laying, bringing the tally to two white egg layers, one rosy-brown, one olive brown, one slate gray. No frozen toes, and no requests for hot noodle soups. 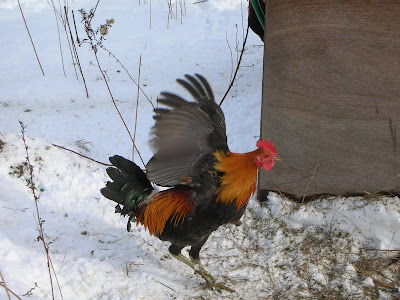 Even the kale, irresponsibly left in the garden, is still good. I snap off some leaves in the morning, put them in a colander in the sink, and by dinner time they are perfectly fresh. 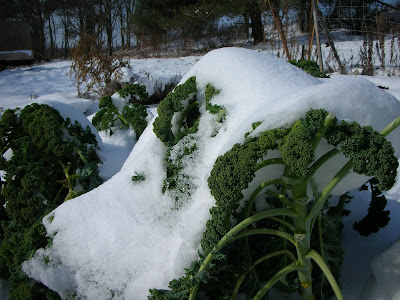 Of course, the quick winter, and the resulting loss of a month or so of tinkering time, means some less elegant cold-weather solutions. Instead of rigging up a solar water trough for the animals, we have to break the ice on their bucket with a hammer twice a day, dump it to smash out all the ice every few days, and refill it one bucket at a time. We have to slog down through the snow-blown pasture to the chicken coop, since we didn't get to move it up closer to the barn. Instead of having the time to build the barn cats cozy winter boxes, I had to cobble some together out of plywood, plastic tubs, hay and woodchips. But none of this is really the end of the world, especially given the small scale of our operation currently. It feels sometimes like we were unprepared for the winter -- probably because we were, a little bit. A large chunk of our pre-winter projects didn't pan out, because of mud, and engines and pumps and mysteriously pressurized fuel tanks, and a general lack of time. But because we are lucky humans, with smart wool socks, and hot chocolate with maybe an occasional pinch of bourbon, and noodle soups, we are doing okay with what we did manage to get done. We are contentedly resigned to hunkering down and trying not to drop too many things in the snow.