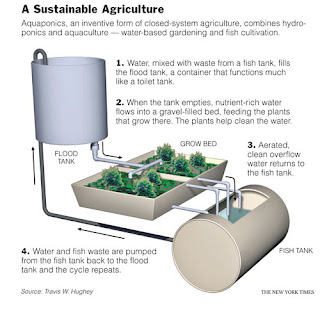 A reader has recently brought this article to my attention, which discusses a relatively new food production technique called Aquaponics.

I am familiar with this type of thing, and it comes with a frustrating corrolary:

I can't find any information, yet, on good pond management. Our pond is small, approximately 30' in diameter, overgrown with cattails and generally unproductive in my eyes. Don't get me wrong, it is indeed producing life, bugs, cattails (a foragers buffet) and a lot of scum, but I'd like it to produce more food for my table. The previous owners created the pond, which is spring fed from below and has no discernable water movement, in order to swim in. since we have a much larger lake nearby in a state park I'd rather swim there, and I envision an ecosystem of fish, aquatic plants and shoreline plants, some of which can be eaten and all of which will keep each other in check with little maintenance from us. 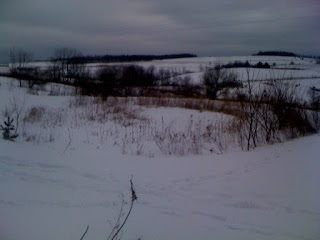 (the pond is looking a bit dreary today)
From this new movement of local food and sustainable food a lot of exciting ideas have emerged about how to move food production into urban environments. At the same time the free moving information of the internet has not reached the rural people who's land lies fallow and could produce more for them and for others. It's both interesting and depressing that these aquaponers (rhymes with boners) use no soil at all. They're so excited about a system that uses no soil when soil is abundant. Right now I can look out my window and see nothing but soil, much of it only growing lawn even though we're a 3 out of 10 on the rural to urban scale. Can any of us see any synthetic clay pellets out our windows?

This argument runs parallel to Eliot Coleman's ideas on fertilizer. When Eliot began gardening on a large scale he read a study produced by the USDA which concluded that the Nitrogen, Potassium, and Phosphorus (NPK) in commercial fertilizer provided the same soil enrichment that animal produced fertilizer (Shit) provides. Eliot was excited to learn this, and proceeded to secure a contract with a local chicken farm to take all of their manure, a service they paid him for. To Eliot this made sense economically, pay for commercial fertilizer or get paid to use animal fertilizer (later on he learned that the USDA study had been done to convince farmers to buy fertilizer, painfully ironic.) In the mean time his plants got the added benefits of all the micronutrients and bacteria, etc. in the manure. Local farmers who'd been at it for decades would stop in and ponder over how the new guy was doing so much better than them.

As I read articles, books and 'blogs about sustainable farm practices many are written from a similar perspective, reconciling the lower production rate of sustainable farming with the lower costs of operating due to less commercial inputs. I assume it's all written this way to try to convince commercial farmers to be more sustainable, but for me anything is better than what I've got now. The aquaponics article has a strong theme of bushels of tomatos and stringers of fish, without even recognizing that an infinitessimal percentage of people raise any of their own food. Why do I have to be wooed into creating my own food sources with promises of bountiful harvests for no labor?

We have 30 acres of weeds and a pond with weeds in it too, if it weren't for neighbors and cars we could let some livestock loose on it and do literally nothing for them and eat them 6 months later, the ones we could find. Add a bit of labor and management and I can put more animals on the same amount of land. Add more labor, some fossil fuel to run my machines and some grain from far away and I can raise as many as there is room to stand. The middle ground seems like the place for us.