A Mish Mash of Thoughts

In order of importance:

Here are a few things I wanted input from readers/friends on. First, we've thrown out the idea of having gatherings every 4 months to try to do some of the bigger projects around the farm. These would most likely be long weekend type gatherings, but if two or more people wanted to come for longer, as long as a week, we could bang out some big stuff and have fun at the same time. The rough model would be April/May, August/September, and then December/January (not much work was done this Dec/Jan, but the bit we did was super helpful.) These don't have to be big ragers with 20 people, even 2-4 extra folks makes a big difference so while it'd be awesome if you came to all three anything would be a big help and greatly appreciated. We'd feed you if you worked hard enough, all you'd have to do is get here. That being said, are there any dates around those periods that are blatantly silly or blatantly good? Like I figure a lot of people have plans on Christmas or Easter, and maybe a lot of people have schedules similar to school systems or colleges where they appreciate a spring break or something. Just throwing it out there, leave your thoughts in the comments. In case you're wondering, here's a short list of projects that could be completed with groups, just to name a few:

Next in importance, a reader (it's fun to refer to friends as "readers") suggested off the cuff that I should host a podcast. This is something that intrigues me and I wanted to know if there's any interest among the masses. I imagine a once weekly program, perhaps 30-60 minutes long, that would include the following subjects, at a minimum:

I don't know exactly how it would work out, but I could do it on my commute and I think the spoken word is a good way to convey ideas and preserve memories, not better than the written word as we have here on the 'blog, but different and appropriate for different things. again, comment if you have an opinion either way.

Onto other news. This article on food dealers taking bribes and as a result feeding you tainted food is good fodder for those conspiracy theorists who believe our nations infrastructure will fall soon and life will be pandemonium. I'm not saying I'm one of them, but if it happens you better have something good to offer when you come knocking on our door.

My job has been mildly stressful lately, the work itself is very concrete, designers provide me with schematics and drawings of parts and I make them to the schematic. The politics and stress surrounding that is frustrating and draining. I find myself daydreaming on ideas of fiscal independence, maybe I could buy a mill and a lathe and machine parts independently. Maybe I could buy a backhoe and make money with it. Maybe I could make some sort of widget and sell it to someone. Then I remember that I'm doing that, I'm starting a farm. The dreary frozen winter makes me forget that often. Luckily it will be March 1st soon and then the whole world will turn to green grass and daisies. (this is an inside joke, since Dec, Jan and Feb are the coldest months I allotted heating fuel for those months only. It worked great on the front end, I was wearing T-shirts until early December, but this side is not looking so fortunate.)

It snowed a crap ton overnight. On our walk Ursula was having trouble keeping her head above the snow and took a couple hilarious face plants when she wandered into unexpected drifts. I dove into a drift myself, it was just so tempting, and she followed me in only to get stuck on top of me in the divot I had made. It's nice to be a point with her that our faces can be close and I'm not afraid she'll bite mine, although others should still be careful. Even though I had made a dent a good 18" into the snow I stuck my arm as deep into it as I could to find earth to push off of and there was none. I just shoveled the drive and my shirt is literally soaked through with sweat, neck hairs to navel. Usually I can just push the snow where I want it to go, this time I had to heave it. but soon it will be March 1st....

Finally, a few pictures for your viewing pleasure. The first is evidence of the dysfunction at my workplace, this sticker is on a vacuum that sits, in the middle of a well traveled hallway, right next to our current vacuum. The sticker is accurate. 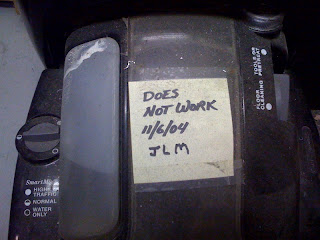 Next we have a bird's nest that is in a tiny bush on our property. I walk by it every time I walk the dog but didn't notice it until today. 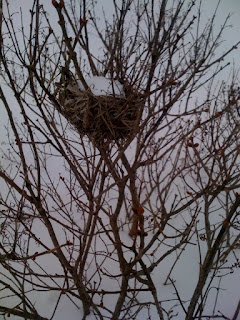 And finally, the sky turns Benz colored (china blue they call it) as the storm moves on to new lands. 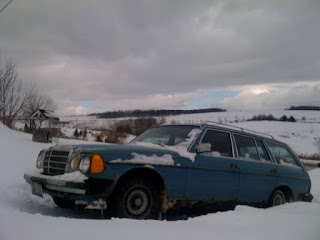