Hurry up please it's time

Well friends, another lazy Sunday was ruined this weekend. This time though, not by the sudden horrifying discovery of the mangled body of an old friend, but rather by some good ol' Christian motivation. It seems that the Big Man was rather chagrined that we, farmers, had managed to sleep until 11, and it was right now immediately time to change our winter weekend routine (which was: sleep, yawn, sleep. eat a massive breakfast. bake bread, simmer beans, simmer stock, yawn, see if Julia and Jaques is on PBS. research goat breeds. make a 5-hour dinner. sleep.) to a not-winter weekend routine. Slight hangovers from a three-year-old's birthday celebration be damned. Cold drizzle, pah. I was skeptical at first, but I can really only take so much berating... I have a large but delicate sense of self-worth.

It turns out, two motivated farmers can get an awful lot done in a few drizzly hours. Visitors will perhaps recall the barn as a drafty, cold space, with gaping open doors on each end. These doors were constantly kept open because they were only attached to the barn via the top slide track, and in the wind they would flap and bang about mercilessly, and were a pretty severe flight risk. The east doors didn't even slide shut, due to some barn swallow/wasp/vine infrastructures. Big Man's design prowess and my brute strength made surprisingly short work of them, and we now a barn with closed, sturdy doors. This is especially wonderful because making a permanent shop space in there is a prerequisite for a lot of our spring building projects, from bee hives to chicken coops to corrals.

Then there is the momentous fact that we planted something outside in the ground, some karmically powerful garlic that we got from a hitchhiker: 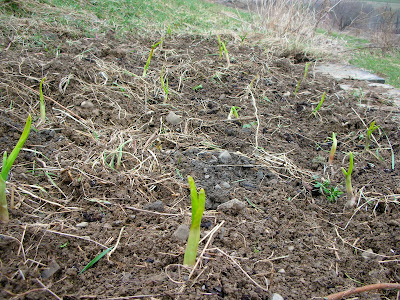 The hitchhiker's name was Jeff, and he lives in a house on wheels that he built, which is currently parked on a corner of a now-defunct hippie commune. He's having disputes with the now-defunct hippie who owns the property, so he's about to drag his home on wheels elsewhere, presumably with his recumbent bike, since he has no car and no interest in ever owning a car. Anyway, the garlic is originally from his sister, who has been planting it in the region for over a dozen years. He planted it last fall (that's how garlic goes, like parsnips), so it already had green shoots coming out the top, as well as a cringe-inducing amount of roots that we had to chop through. We filled up a paper box with two dozen huge and delightfully pungent bulbs, and spent an hour sweating in the drizzle to tear up sod, break up clods, and stick them in the earth. I am really hoping that they survive the somewhat massive trauma and take to their new bed.

Given our resoundingly productive half-day, we have decided to accelerate our plans from "prudent and lazy" to "maniacal". We think this will serve us well. 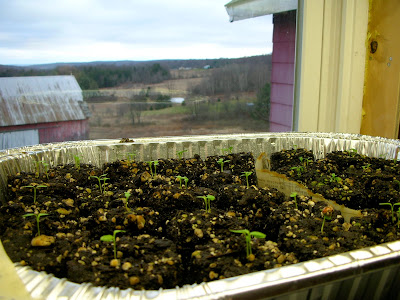 Meanwhile, the celery keeps to its prudent pace, haughtily surveying the fields from above.