The Murderer, and RIP Hyena Cat

I can hear the Murderer moving around upstairs, so I'll try to be quick so I can get back to thumping on the ceiling with the broom handle.

We got hit with a rather inconvenient snow storm, one which actually involved me driving off the road on the way to work and requiring the assistance of Doug the Tow Truck Driver. Fun times. 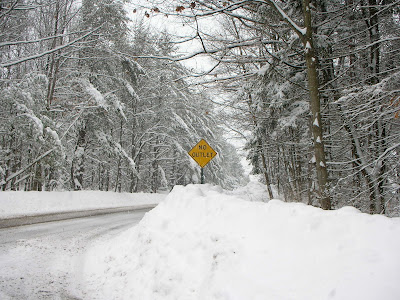 Anyway, during the storm I spent a few scant minutes fretting over my favorite ally (in the ongoing/evergoing War Against Mice), the Hyena Cat. But she's totally awesome and more hardcore than even the Red Gang in Chicago (who still owe us 9 car windows), so I didn't fret long.

So imagine my dismay on Sunday morning, when, happily traipsing downstairs for some much-needed slipper time with coffee and the nytimes, I saw out of the hall window a bloody carcass, with entrails featured as extrails, a ripped off face, and a mottled-with-blood pelt. It also featured uncomfortably close to Hyena Cat colors. Here is a blood stain after removal of said carcass. 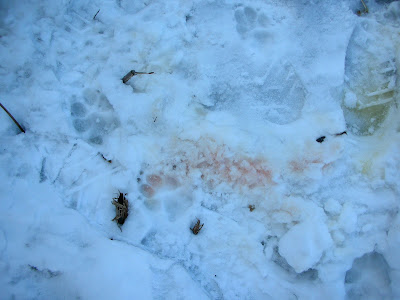 Now. The troubling thing is the placement of the body. Devout readers will perhaps remember the cute little cat passage in our back kitchen wall. I liked to pretend that cute little cats went in there occasionally, to hunt mice. The Hyena-Cat-like carcass was found just outside that access hole. With not enough accompanying blood to assume that she was killed there. As if she were dragged there. By a murderer. Who has apparently made his home in our goddamn wall, and in the attic above the kitchen, which is the one part of the attic that we can't access. And who delights in moving about with skittering claws and thumps as I stand in the dining room, staring wide-eyed at the ceiling and turning up the music as I clutch my wine ever harder. Yesterday the Murderer had Ursula so spooked that she refused to leave the dining room even when we put food in the kitchen. And it is rather eerie. Hence my propensity to whack the ceiling with the broom when I hear it begin to writhe about in what is in all likelihood its devil worshiping dance.

So. Who killed what is probably the Hyena Cat, my favorite barn cat, who was exactly the color of our fall pasture, who was always peeping from the hayloft with curiosity and intelligence, and who loved turkey leftovers set out sneakily on the front porch?

Evidence: those other skeletons in the wall. One cat, and one Mystery Beast, probably a possum. Maybe the world's most gigantic mutant rat. (Evidence in that horrid theory's favor includes all the "Giant Rat" brand rat traps that I found in the attic when I was cleaning out the former owners' junk up there last September.) Is there an ongoing war between team possums-rat and team cat? And then there were these (mutant?) footprints we found in the barn. Ursula's paws as a size reference: 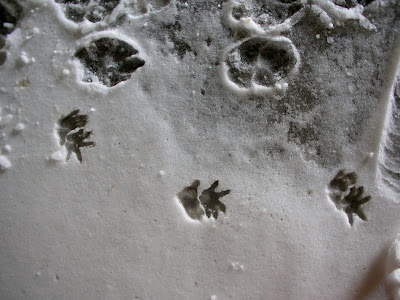 There were also bunny prints all about but I think they're disqualified on account of how bunnies just eat pansies and easter eggs and Jesus' risen spirit. Unless Frank lives in the attic.

Suspects:. Could Ursula be the Murderer? She did find the body, and Criminal Minds on tv has taught me that perpetrators often inject themselves into the case by doing such things. Was it another cat? The Orange Kitten, even? Otherwise, a possum, raccoon, mutant giant rat, werewolf, bin Laden?

And: how do we get it to stop dancing around in our house???