So, if this blog were a Tamagotchi, it would totally be dead right now. Sorry about that. The time for an update is clearly ripe. Therefore: here are some things that have happened since the beginning of March:

1. Spring is here. Thus, a big fat 'F you, you hater' goes out to Punxsutawney Phil, who got it totally wrong by at least a week and a half. The immensity and drama of the change is remarkable. The silent monochrome of winter transformed literally within a matter of two days into a cacophony of birds that is almost startling in the mornings, and the muted browns and greens that have sprung up seem downright opulent. Geese are back, flying north and scuffling over the thawed out smaller ponds. The lilac bushes that surround the house have buds the size of my thumbnail. The maple trees on the west side of the lake have a faint reddish haze about them -- new growth. And, the truest and most delicious of all signs, the Big Man and I tonight consumed beers, outside.

2. We planted celery and celeriac in soil blocks. Here is what the soil blocks look like: 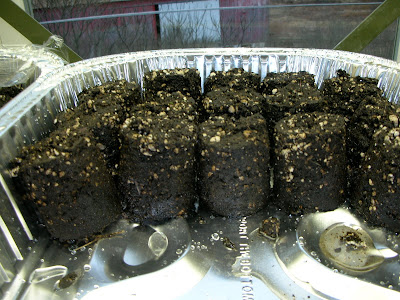 Attractive, no? The mix is mostly peat moss, with a hefty amount of compost (generously donated by Spike Westervelt...or I suppose I should say his horses), some perlite and soil. There is supposed to also be lime, to balance the pH level. We forgot that bit. They sit in roasting trays, which are in turn positioned on top of a water bed heating pad. This keeps the soil blocks at a steady 70 degrees. Hopefully warm enough for the little guys to germinate their asses off. They take an excruciating week to show up, thus, so far we've got nothing but a few very pampered weeds to show for our labors. Stupid ninja celery. 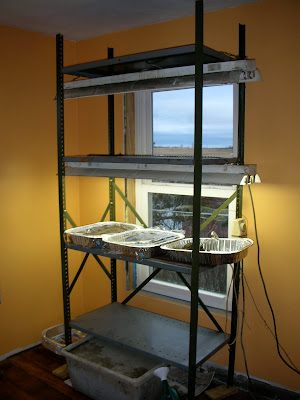 3. The Murderer has departed! Well, I think. Sometimes I still hear scuffling about in the walls, but it's nothing near like right after the storm, when our house was clearly a 24 hour residence for something quite awful, and disturbingly large for living in walls. I can mostly convince myself that it's just mice. (I am still shocked as to how placated that thought makes me -- Oh, that's probably just mice in the walls. No big.). Huge sigh of relief all around.

Artichokes get soil blocked tomorrow. Chicken that was grilled outside gets eaten immediately.