Yesterday Mrs. Spike was down at the farm, and amid a general discussion of dogs and the ticks that love them, she noted that "They say ticks don't come out until the frost has killed the peepers three times." Aha! I thought. Peepers. That's what those loud night things must be.

(You kind of have to move the little bar along to get it to start playing, but it works.)
There's no picture, because aside from being loud in the country at night, it is also very dark. But mostly loud.

According to the Internet, these are tree frogs, and variously known as "pinkletinks" (which is what they are called in Martha's Vineyard, obviously) and "tinkletoes" (only Canada could come up with this).

Others (ahem), when they hear "Peepers" of course think of Marvel Comics and stare at Mrs. Spike with confusion for a few seconds. These literary folks recognize Peepers as a tragicomic accidentally evil mutant with a stutter, who was rendered mute by Captain America, and retired from fighting to demurely wait tables at a bar for bad guys. Wikipedia informs me that after this, he hit a deer while driving, ended up stuck in a ditch, and was there eaten by a supposed "Predator X," who was invented waaaaay after I stopped reading comics.

Anyway, what Mrs. Spike really meant, was Spring is coming; you better get ready. 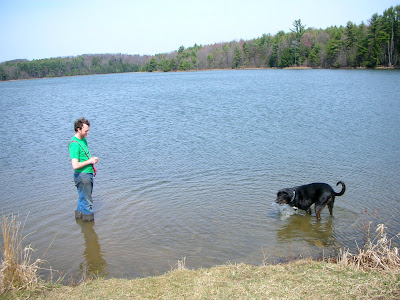 The lake is a lake again, and even Ursula wants to play. Or at least, bite its ass.