Yesterday we picked up 3 more piggos, two Tamworth cross ladies and a Large Black Hog boar. So far they've done nothing but hide together in the far corner of the paddock under the thorn bush. That's ok; they need some time to get used to their new area and their new pen-mates. They seem to have bonded together pretty quickly. 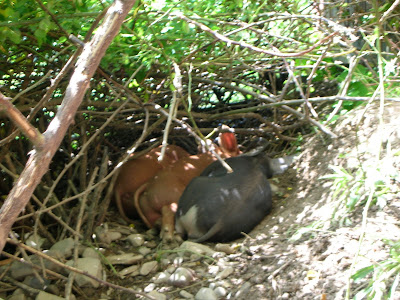 When we were picking up the pigs, we asked the farmer, Tim, about poor Stump, who has only been getting bonier and more pathetic over the past week. He said immediately: "Worm 'em." Right on the spot he gave the three new pigs a deworming shot and showed us how to do it, and he also sent us home with a syringe and enough dewormer for Stump and the two others, who probably have worms too but aren't showing it. All the farmers we've met so far have been incredibly helpful and supportive. Tim actually offered to drive the hour and fifteen minutes to our place when it's time for us to castrate in the spring, to help out and show us how he does it.

It was easy to give Stump the shot, although she did put up a little protest. The other two, however, at about 70 incredibly muscley pounds, took quite a lot of effort to flip over and pin down. They were not pleased. If you've never heard a pig scream, it's pretty difficult to describe. It is the noise, perhaps, for which the term "ear-splitting" was invented, because it actually feels like something in your eardrum is shattering. They put up a big fuss, but after they get the shot they just stand right back up like it was no big deal. Which, of course, it wasn't. So hopefully little bag-of-bones Stump is on the road to recovery...we shall see.

As for Little Man, he healed up good and got chucked back in the brooder with the others on Friday. Even though he's still got some scabs, no one seems to be bothering him at all, and he seems glad to be back. 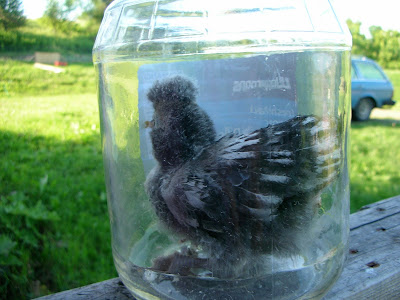 It is a hot day today. So hot, that Spotbellied spent some time trying to fit herself into their water tub. 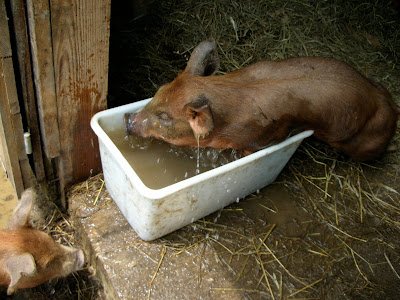 So the Big Man dug them a little wallow... 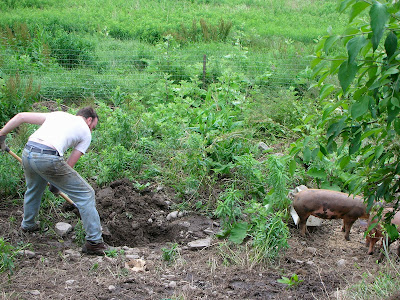 which they really enjoyed.

Meanwhile, the garden is looking good...it's already time to hill the potatoes, my cucumbers and cantaloupe have blossoms, the tomatoes have buds, and the brassica family (cauliflower, cabbage, broccoli and brussels) are getting gigantic. I harvested a big bowl of mesclun this morning, along with some garlic scapes and herbs. 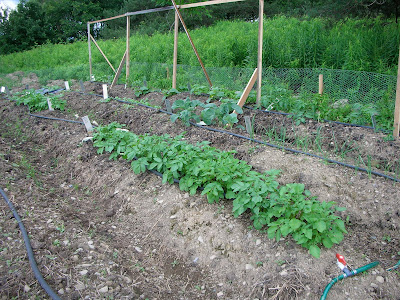 Potatoes in the front row, leeks, cauliflower and tiny turnips in the row behind, tomatoes and cucumbers in the back.
This evening, when it (hopefully!) cools off a bit, we're going to finish the trellis in the back row for the cukes, tomatoes, beans and peas.