Running Up That Hill

I am afraid to maybe jinx this, but screw fate: I think Stump is going to pull through.

My Sunday post was a little optimistic; we had just received a probable diagnosis, which felt really good. But really, by Sunday, her hips weren't just little points that stuck up on her back, you could see them swooping down her sides. You could count ribs from 20 feet away, and her general pathetic listlessness was getting worse. By Monday I was asking the Big Man what I should do with her body were I to find her dead, and by Tuesday [spoiler alert: I am not a good farmer] I was sitting on the floor of the barn with Stump, drinking an "I am completely distraught and out of my element" beer, having a good cry about the painfully short life she got and trying to work out my feelings of general inadequacy. 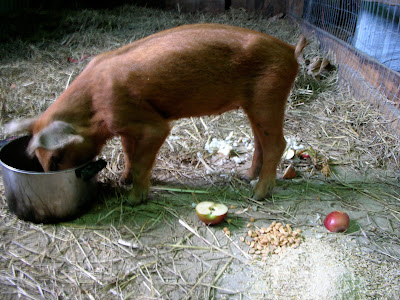 Last night I left her locked alone inside, with 2 quartered apples, a pile of rice pudding, some peanuts, a peanut butter/pepto bismol mix, and a pot full of water mixed with pedialyte and red gatorade (the result of a hilarious conversation with a Rite Aid employee). And, miraculously, this morning, the food and drink was mostly gone. I let her out for the day to socialize and forage. This evening after work, I separated her again (she knows to follow me up to the barn after I dump feed for the others; I'd been giving her a few alone hours with special food for a week or so now), gave her some rice pudding and apples, and watched in awe as she ravenously devoured them. It was likely more food than she'd had in a week, gone in 15 minutes flat. I dumped more food in, and when I came back in an hour she was still eating (in the past she would have been too tired after 10 minutes, and I would have found her asleep under a pile of straw).

So, I am exhaling a preliminary "phew".

The new pigs, meanwhile, have emerged from under their thorn bush, but are not yet ready to be friends.

And, in answer to some queries, a brief garden tour: 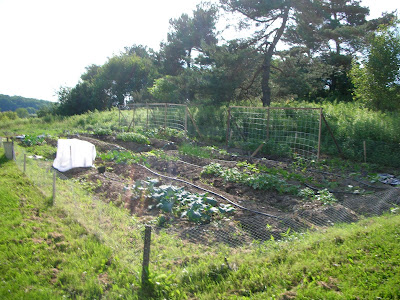 This is the garden. The white, kaaba-looking structure is for the delicate, delicate eggplants. 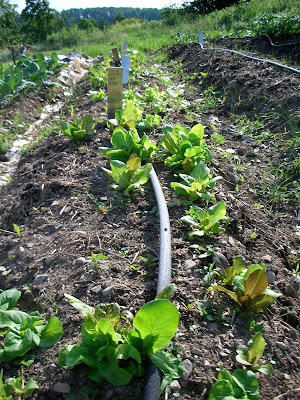 Greens. Turns out, I planted too many. Salad is now a requisite with every meal. This is only about a third of them. 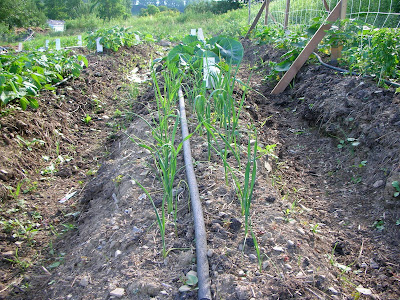 Leeks, with cauliflower behind, potatoes to the left, and tomatoes/cucumbers to the right. 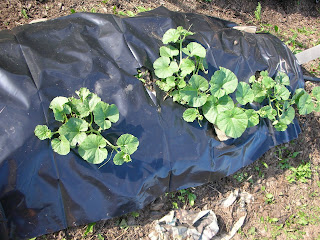 Melons! I did an experiment. The ones with black plastic under them are about 2x bigger and infinitely less munched-upon than the ones without. Remember this. 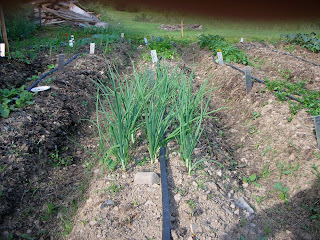 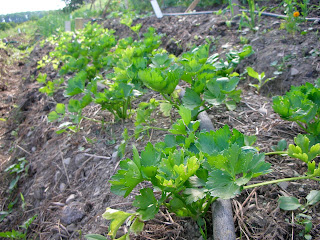 Celery. This picture is for my grandmother, all the other ladies that give me a pitying, eyebrows up look when I mention that I'm growing celery, and the 1976 How to Garden book that quoth "Even the most experienced of gardeners do not deign to attempt celery" with no explanation as to why. Because of you, I am expecting this entire row to sink into the earth or become covered in locusts any day now. 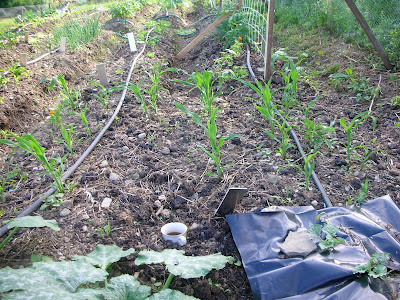 Corn plot, with squash scattered throughout, and a slug trap (coffee mug full of beer) in the middle. Slugs, man. So far, my Most Wanted enemy.

Not pictured: broccoli, turnips, radishes, potatoes, thai basil, the herb garden, peas, beans, the garlic plot and brussels sprouts, winter squash, all of which are marvelous, as well as peppers that look boring still and won't grow quickly, carrots that won't germinate, zucchini which for some absurd reason I am the only gardener that might not have enough because WHY WON'T YOU POKE OUT OF THE GROUND, blah blah blah, life is full of disappointments.