After what must have been torturous weeks pining for the acres of green beyond their little pen, the piggos have found the promised land. A land flowing with burdock and goldenrod, where succulent slugs glisten in the sunlight and the market potential for wallow building is unlimited. 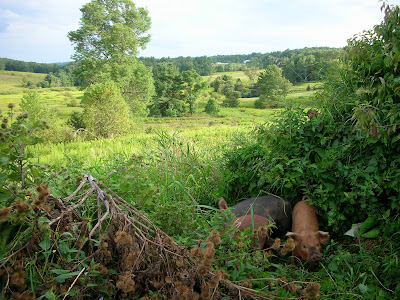 Nom nom nom.
I guess I thought that the freed porkers would happily frolic through the entirety of their new 4 acre pasture, perhaps scouting out the perimeter, meeting new neighbors, sampling the greens in each quadrant before settling in to really root about. 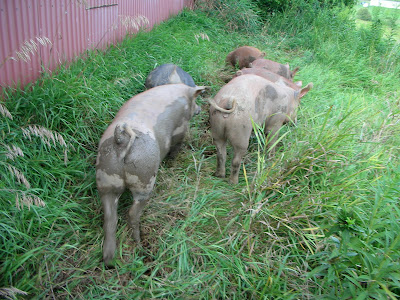 Instead, they have more or less used the pasture as a refrigerator. They hang out in front of the TV in their stall, eating cheap calories and sleeping in. Every couple hours they will scoot out for an hour or so of heavy browsing. Then, full and lazy, more Law and Order and mouthfuls of cheez-e corn puffs. Useless teenagers, every last one of them.

They are getting more adventurous, and I'm sure that they will fan out while still using the barn as a home base. Like, you know, college grads. Especially in this economy. 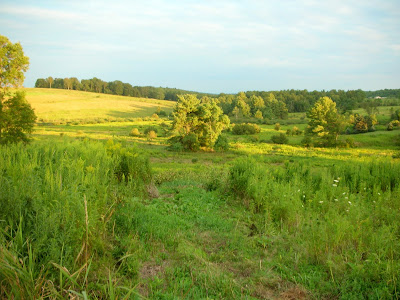 But of course, what they are doing is entirely prudent. The barn is what they know, it is where their food is, and their water is right outside. They are probably too smart for frolicking. Plus, the pasture is basically a jungle, nearly three feet over their heads. We can only tell where they are by how the greens wiggle. No wonder they still like to veg out in familiar territory.

And it is rather remarkable what they have done to their pen. It was the same overgrown pasture as the rest of our land, now empty for everything but burdock (they seem to like only the roots, so it takes a long time for them to kill them) and the larger bushes and trees. The rest is unearthed rocks, and 8 inches of loose, tilled soil. 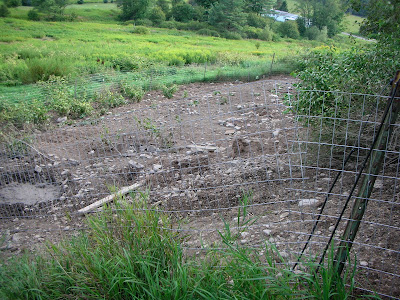 It is making me fantasize about next years potentially pig-tilled garden.