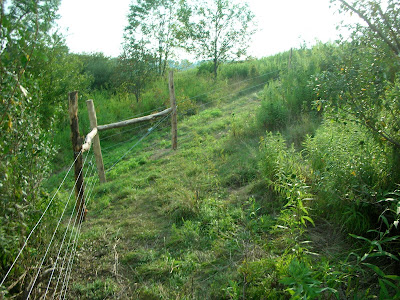 One of the harder things about this whole farming thing so far is how many unexpected, unplanned-for misadventures pop up to wreak havoc on our beautifully well-laid plans. We had an extended, Big Man-sized weekend planned, which would have included cleaning out the hayloft, moving everybody into the pasture, and probably some well earned time swimming, deciding where the fruit trees will go, hunting tomatoes in the tomato hedge, and making gem sweaters in preparation for the winter, etc. 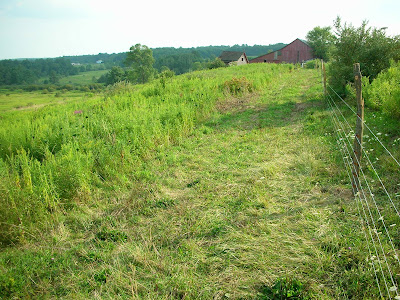 Instead, yesterday evening presented us with a disturbingly sick goose, a failing well pump in the barn, and a myriad of car problems to be dealt with ASAP.
We were not happy. There were blisters, and a panicked goose in the sink.The goose (so... I am bad at taking pictures of things I'm pretty sure will die, so there is no photo documentation of this event. If I am feeling devious and driven tomorrow, I will douse a goose in water until sad-looking and fill its lungs with death, and recreate the entire event for your edification) problem I think is mostly solved. A night was well-spent on the plant shelving in the guest room, in a plastic tub on a heating pad, in a little nest made of an old bath towel, and all seems to be well. Full re-integration is expected this weekend, after the goose has spent some timeout in the tamer, less wet turkey pen next to the now pool-equipped duck and goose habitat.

In celebration of the fact that the Half-Drowned Goose survived, the garden gave some exciting harvest. The first melon, the first artichoke. 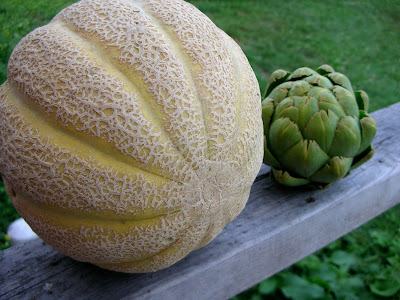 What is going on with the barn well is a mystery. What is clear is that, after about a quart of water, the pressure plummets, and it takes FORTY-TWO MINUTES to fill up the pig water trough. Caveat to fixing this swiftly: we do not know where the well actually is. Some preliminary exploration has revealed an odd, gigantic piece of metal at the end of a PVC pipe. Is our barn water coming from an ancient underground cistern??? Only time will tell.

Thankfully, we did get a hecuva project done over the past few weekends. The six-strand electric fence to the First Pasture is up, connected, and operational. Now, if everything else will stop shamelessly throwing itself at us , perhaps we will have time to move everything into it. 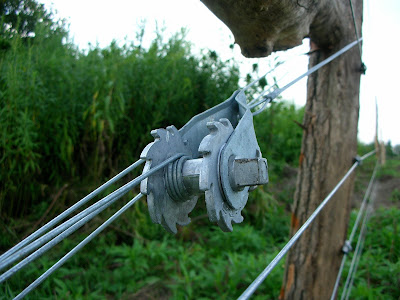 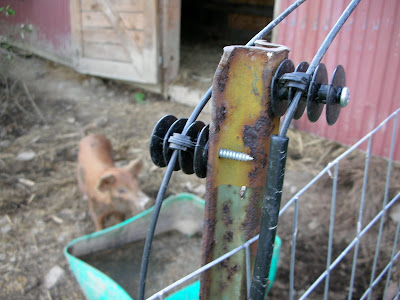