Sometimes, being lazy is a good thing

Last Saturday I was grumpy over breakfast. 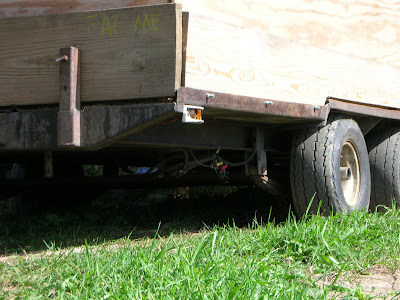 We had spent the weekend before with some of our most practiced and talented Movers of Piles of Trash, moving piles of old hay out of the hayloft. We moved 7 trailer loads of the stuff, shoveling it down from the hayloft into the trailer waiting in the lower barn below. 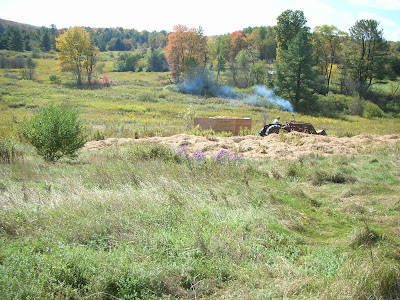 It was A LOT of hay -- dusty, sweaty and gross, mixed with just enough pigeon poop and rotten dolls to make it particularly unappetizing -- and just when we thought we had hit the homestretch, we realized that the last bay of the barn was actually full of piles of sawdust, carefully concealed under a small layer of hay.

This was discouraging. Old hay is dusty and itchy, but you can push about relatively big piles of it with not too much effort. Sawdust however...this was a shovelful at a time sort of thing. We managed to fill up a trailer with the dust-hay mixture, but could not empty it. It was dusk. We needed our well-deserved sausage and beer. 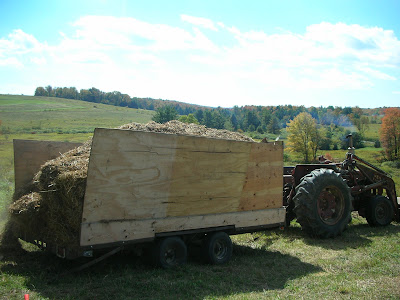 The trailer sat for the week in the barn, full of Hell. The lower barn itself was coated in a layer of fine dust. The boar was grumpy about it and moved his bed outside.

And I, the next saturday, was equally grumpy over breakfast. I wanted to spend time poking in the garden, investigating bugs and such, and giggling at geese and pigs. Maybe finding the energy to bake a honey cake, or read the Sports section of the Times. Looking into my granola, I warily remembered what it was like to shovel out trailers of trash with the Big Man last fall. There would be no honey cake, and no Times. Only short tempers and protesting shoulders.

What if, I proposed to the seemingly-resigned-to-his-fate Big Man, what if we took the tailgate off the truck, and just drove around really fast over bumps and up hills? I envisioned Mr. Toad's Wild Ride meets hayride. 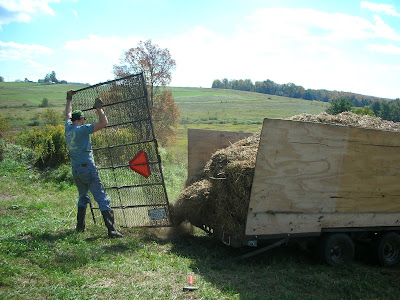 No reply. Just the tip tip tap of the keyboard.

What if, I tried, we built a ramp to drive the tractor up. A steep ramp! Or, we could get the pigs to push it out!

What if, (getting desperate now), omigod, what if we chained the front of the trailer to the bucket on the tractor, and lifted the bucket up realllllly high? 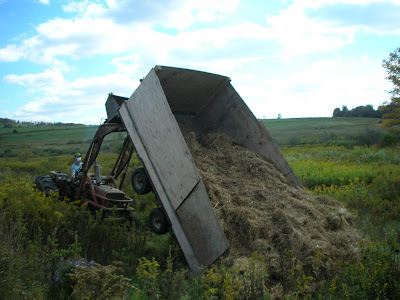