When the farm gives you lemons... 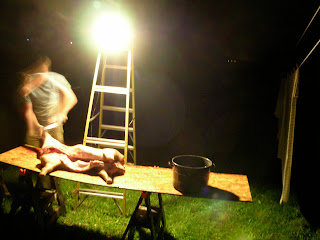 Well, we've had our first mammalian death. The backstory is long but integral, so bear with me and we'll get to the juicy stuff soon.

As many of you know, we have two outdoor spaces that are predator proof, the pig pen (1/16th of an acre) and the pasture (4+ acres). In our learning process we always try the thing that is easiest for us first and work backward until we find a happy balance. As soon as we had the pasture up we wanted all the animals to get a chance to live free on the grass, so we moved in the birds and opened the gate for the pigs, providing everyone had free range. It worked fine for a few days, but then the pigs began terrorizing the birds, eating their food, eating one of them (RIP Black Turkey) and generally running amok.

Our long term plan has always been to rotationally graze the pasture, 4 acres is more than 6 pigs need. Electronet fencing is a type of temporary fence that works well for all the species we might want, and it's a perfect blend of rugged and nimble. We'd been holding off to buy it until I could figure out how much we needed, but the pigs poor behavior inspired me to figure that all out. Unfortunately, the fencing arrived on a very rainy Thursday. When the sun came out on Friday I set it up in the pasture, making three separate paddocks so I could divide the pigs up, something we've been meaning to do for a number of reasons. I attempted to separate them into the three groups I wanted, but when that proved too difficult to do alone I just let 'em loose. Later in the afternoon I noticed the boar alone in one of the paddocks (they were all set up but had a short section open) and I decided to close him in. Johnson came home soon after and we set to work canning an epic load of tomatoes --14 quarts, a new record for us. Johnson was excited to see the new fence but the canning has a lot of prep, so she didn't get a chance to look for about 90 minutes. She came back and said the boar had gotten out and some of the fence was down. I went down with her to investigate, and discovered that one of the Tamworth gilts was caught in the fencing, had run for her life and died.

I went into action, and sent Johnson to get a few knives and my rubber boots, since I was already in my messy clothes (surprise surprise!!). Naive Johnson assumed the knives were for cutting the pig free, so she was right surprised when she returned and I was dragging her up the hill already. It was just getting dark, which proved good for photos but aggravating for the Big Man. (A quick note on the photos: I was busy, as you can see. If I had taken them I would have gone for more descriptive clinical images, but Johnson's artistic take really capture the moment, you readers are lucky she was there.) 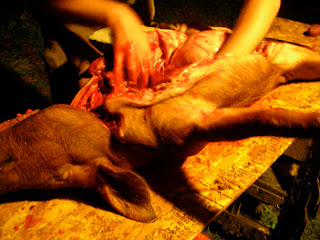 I've been researching slaughtering and butchering in my free time, so I was pretty much ready for this. I slit the throat to bleed as much as might come out, and started assembling a makeshift table so I didn't have to work in the dirt. Becky set up the hose (constant rinsing is key) and started water on the cooker for the scald and scrape, more on that later.

I needed to gut and clean the carcass in order to save the meat, At that point I wasn't sure what I'd want to do with her in the long term. This pig, from now on known as Skittish Pig, was probably about 110 pounds when she died, which is half the size of a butcher hog. That means she has tiny bacon, tiny pork chops, and tiny everything else, limiting our options. 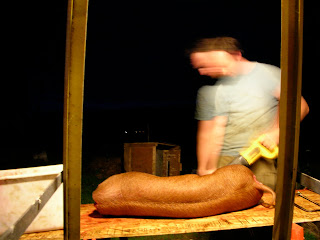 The most important part of gutting is to remove the digestive system intact, no one wants shit on their meat. I was unable to go through the rear since I didn't have the proper tools, so I elected to go through the middle. The belly is impressively thin, and I knicked an intestine just the teeniest bit as it spilled out of the body cavity. All in all it went well, and it was a nice dry run for the next time as I know exactly what tools I need to make it easier. We opened up her stomach to see what she'd been eating, and it was a healthy mix of grasses and grains. The process was blood free for the most part, something that impressed both of us.

The final step was to scald and scrape the skin. A pig is special among non-avian livestock, as you have an option when it comes to the outside. Some prefer to skin the pig, while others scald the skin with hot water and then scrape off the hair and topmost layer of skin. both are a similar amount of labor, as skinning a pig is much more difficult than skinning a cow or goat, so in my mind it boils down to whether or not you want to eat the skin. Scaling and scraping was the biggest unknown in my research, everybody does it a different way. Some dunk the whole carcass in hot water (150 F) while others ladle much hotter water (210 F) over the animal.

In our haste we did not have the time for the former, so the latter it was. The first couple tries were rough, but I eventually got the hang of it. The process was made even more difficult because I had gutted the pig first, leaving a lot of skin that was on the edge and thus hard to scrape off in long, broad strokes. If I had been there when the pig died I could have scalded and scraped first, but with the delay it was important to get the temperature of the meat down as fast as possible. 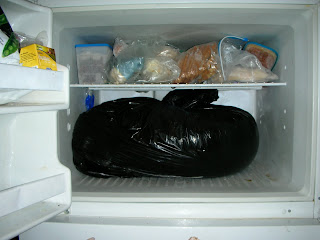 All in all it took 4 hours to arrive at the end point, a tidy package in our freezer. Upon further reflection and discussion we agree that there isn't anything we could have done to prevent her passing, accidents and death are inevitable on the farm. We were lucky it happened when it did so that we could salvage something. Even Ursula got a treat, although she wasn't quite sure what to do with it. 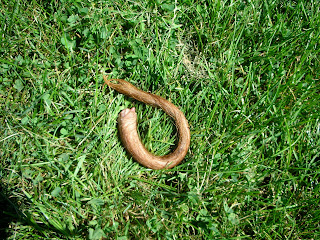 I can hear the question on the tip of your tongue: If I come in October can I eat some of this pig? Most likely. At this point we've decided that we still want to remove Stump from the herd, we hope to slaughter and process her the week before the party when we'll have some extra help on hand. Skittish pig is a great size for spit roasting or pit cooking (about 80 lbs. dressed, 60 lbs. of meat), and if you happen to have experience with either please let me know as I'd appreciate some input. The only question left to answer is whether we'll buy another gilt to replace Skittish, or if we'll just breed the three remaining, hopefully we'll have an answer soon..