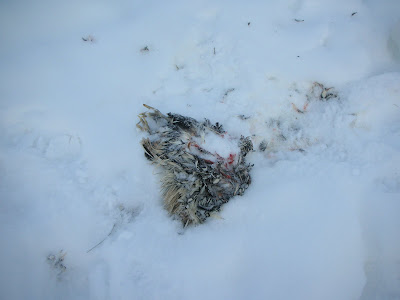 Although we have several black and white chickens, I instantly knew which one was the mangled, frozen body that I found outside the chicken coop this morning. It was Little Man, the poor fancy chicken who had been the flock outcast since he was a tiny chick. From the day I first had to separate him from the other chicks in the brooder because his back had been pecked bloody, he constantly had peck wounds on his back and butt. His tail never grew in; its feathers were constantly yanked out by either himself or someone higher in, as they tellingly say, the pecking order. 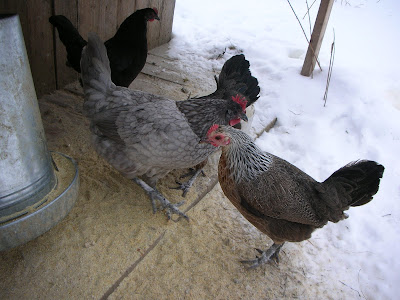 Who, me?
Being one who generally believes in the good in others, when I first saw him I thought a hungry predator had finally found the chickens. But, upon further inspection, I realized that his entire body was there, very bloodied but completely intact. When I opened the window of the coop to check for eggs, several hens wandered out the door for their breakfast, politely ignoring Little Man's corpse in the snow. Usually curious about anything new or amiss in their area, they studiously avoided even glancing toward the crime scene. And to think, I had been worried that they would be startled and appalled to discover their coop-mate so cruelly dispensed with. They cooed to each other righteously. 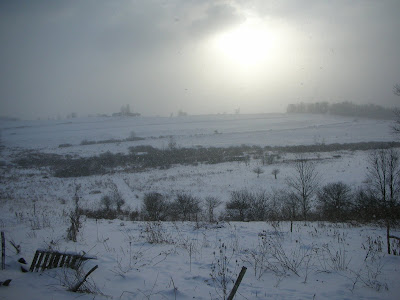 Brooding blizzard sunrise
I'm not sure if it was the rest of the flock, or just one or both of the other roosters, but this crime certainly seems like an inside job. All the snow and harsh winds recently have meant that the chickens have been forced to spend most of their time huddled together in the coop. I guess, finally, pathetic bloody Little Man was too much for them, a respectable bunch, to accept. If we were more experienced farmers, we would have seen this end as unavoidable, and we would have womanned-up and done the job ourselves back at chicken killing time. As it is, mob rule won out over the little guy. I'll miss his goofy muppet head bopping about by itself in the high grass, and I think he was our most famous chicken (having both inspired artwork and getting a shout-out on NPR), but it will be somewhat of a relief to have an outcast-free (and thus, fully feathered) chicken flock.