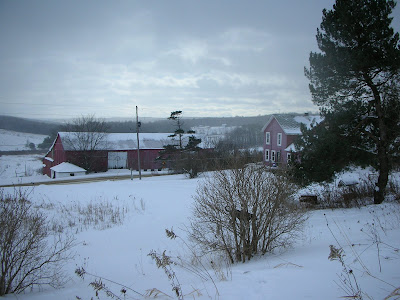 A couple weeks ago, though all was cozy in the farmhouse, something was amiss in the pigpen. The boar, hungriest of hungries, was ambivalent about food. Otherwise, he seemed fine -- no wounds, no odd excretions, no discernible eye/ear or throat problems, no major lethargy. It's true that he seemed more interested in sleeping than the diligently curious ladies, but he also was spotted rooting through the snow and ice in the far corner of the pasture, and always got out of bed to fondly poke at my kneecaps.

Aha! Fond sweet nuzzles instead of diving into the feed pile....we'd seen this before. It was more than reminiscent of Stump in the first stage of her worm issue. Mentally checking a calendar, we noted that it had been eight months since their last shot, so we thought it best to give them all their boosters.

So, it turns out that it is difficult to stick a needle into the neck of an agile muscly beast of over 300 pounds. The Big Man was able to get the sleepy boar quite easily, and curious friendly Spotbelly with minimal trauma. For the two more skittish ladies, Scar and Little Red, he had to build a pig snare, a simple contraption that loops over the top bit of the nose and keeps the thrashing and jogging about to an absolute minimum. Even so, he still needed me, a full sheet of plywood, and a lot of wrestling to get Little Red. 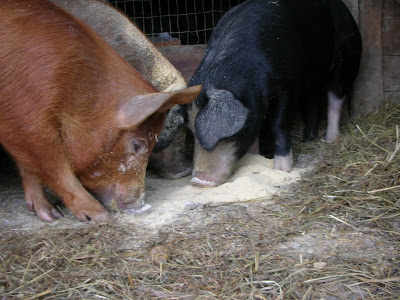 And, just a couple days later, the boar was back on his feet, eating with reckless abandon. Last year, Stump was set back a good two months from the worms; the boar maybe lost two days of not eating to full capacity -- a gigantic difference. A life threatening issue last season becomes a mere hour-long chore the next. That's the direction we want the learning curve to keep moving.

And, in a vegetables and greens note, after last year I have determined the value of having TWO garden maps, for, really, two gardens -- one in spring at planting, and one in mid-summer, when the fall crops will need to be planted and moved out. With better planning (not to mention the fairly ginormous Garden Enlargement Project 2011, which adds a separate bed for storage crops and moves corn, squash and pole beans to the pasture), I feel confident that I can triple the garden output next year, which would put us nearly all the way towards self-sustaining ourselves through the year, vegetable-wise, not to mention doing a good bit to add to the pigs' winter diet with bins of farm-grown winter squash and dried corn to help hold them over. 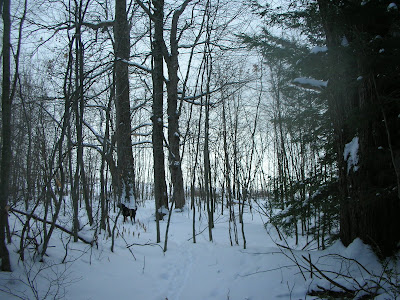