When the Big Man was doing some work on the house a few weeks ago, he uncovered the original wood foundation of the house.

There were several sets of initials carved into the wood, as well as a date: "1864."

After the age of probably seven, I have never really believed in ghosts.  However, there is something about October that always gives me pause.  Maybe it's the rustling of dry leaves amid the sudden darkness of evening, the strangely personal feel of a gust of wind whipping out of nowhere to lift up a scarf, that rush of adrenaline when one is outside, alone, in the dark, walking towards the lit windows of home, that rush that urgently whispers that something will snatch you before you make it.
﻿
﻿Since moving to the farm, the creepiness of the season is far more apparent.  Predators who have spent all summer deep in the woods creep back to nibble at the edges of civilization.  We've had several chickens go missing in a puff of feathers  and drops of blood (leading to the abandonment of the chicken coop by the Bernie and his Coop Hens...but that's another story).  Coyotes have been making their strange nighttime warbles more often.  For some reason, the more unsavory leftovers from last month's butchering will not remain covered in the barn compost pile.  The barn cats seem on high alert, perching themselves on top of the milk parlor roof and in the empty window of the abandoned hand house at dusk every night.  Not to mention the cornfields, empty forests, and small unkempt cemeteries in nearly every square mile that completely surround us.  All the trappings for a horror story.
Then, of course, I have been reading and watching some creepy seasonal fare, and imaginations are bigger, louder, and less polite in the country.  It is hard to believe sometimes that the young city couple in the 150-year-old farmhouse aren't going to be featured in a ghost story told by wriggling ten-year-olds around a campfire in 2050.
﻿
﻿
So far, of course, the initial carvers have not bothered us.  But we will take special care to tread lightly on their floors in the hopes of keeping restful spirits at rest.
Because you just know that in 1864 people did not leave their homes to die, or their properties to be buried... 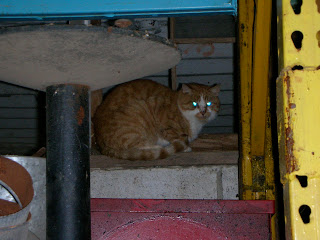