A Eulogy for Bernie

Folks who have visited the farm have met our rooster, Bernie.  Perhaps you were admiring the view when something heavy and sharp suddenly slammed into your thigh.  Perhaps you were busy carrying heavy feed buckets when a puffed-up greenish blur blitzed out of a rosebush to attack your boot.  Perhaps you tried to fight back, learning only too late that any agression short of a full-fledged punt only made Bernie more excited to fight.  Perhaps, then, you will feel some relief to know that Bernie is dead.  Long live Bernie.

Although I spent much of the spring and summer fantasizing about stewing Bernie up this winter, his death came as something of a shock, and the barnyard is a much more dull and lonely place without him.  By August, in fact, I had decided that Bernie added more flavor to life than he would a stew.  So it goes.

The Big Man and I learned early on that Bernie was something we had to keep our eyes on when we were on His Side of the Road.  First he killed all the other roosters.  We collected their corpses with trepidation while watching him patrolling the hillside.  Then he moved his hens out of the coop and into the milk barn.  From that home base he was able to scale up his bird-on-human attacks, ruling the area from the road to the bottom of the pasture, setting up ambushes, herding his hens, and making life interesting (sometimes terrifying) for the farmers.  He chased Big Man through a burdock patch, landed me on my rear in the compost pile, and has been the reason for numerous lost tools as anything within reach has at some time been flung at him in a vain attempt at self preservation. 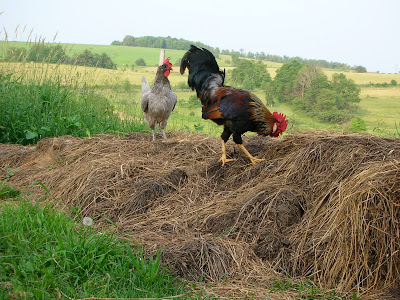 The Big Man eventually whacked Bernie enough times with shovels and pitchforks to earn some respect, so I spent the entire month of April trying to teach him to similarly respect me.  I had six of seven brooms stashed around the barnyard so that I was never more than a few strides away from one.  Every time he got within brooms-length of me, I'd let him have it.  After four or so good whacks (often I would thwomp him, golf-style, sending him flying a few feet through the air) he would shake his head clear and mosey off in the other direction, keeping one vengeful eye on me.

Since the brooming, the rooster-on-farmer violence had slowed, with Bernie preferring to play red light, green light.  Walking through the barnyard, I would often see him out of the corner of my eye, slowly edging his way toward me, pretending to peck at the ground as he maneuvered.   I'd turn toward him and he would instantly freeze, one foot off the ground.  If I turned to walk away, I'd hear the "thwap thwap thwap" of him running toward me.  Whirl around, and Bernie would freeze mid-stride.  He would look at me stunned for a minute with an "oh crap, she caught me!" face, before narrowing his eyes and pretending to peck at the ground, slowly inching forward.  I got fairly adept at walking backwards.

All in all, and it is strange to say, Bernie is sorely missed.  I was really starting to enjoy standing on the house side of the road, watching him stalk an unsuspecting farm visitor.  And he was such a sweet, puffed-up dad with the 13 hoarded chicks.

We have one of those male chicks in the henhouse now -- Bernard II, Son of Bernie.  He's got the same green plumed tail, and (like many roosters) the same severely crazy orange-red eyes.  Here's hoping that he got some of Bernie's crazy genes as well.