The Perfect, and the Less So

Scar had her piglets last Thursday. 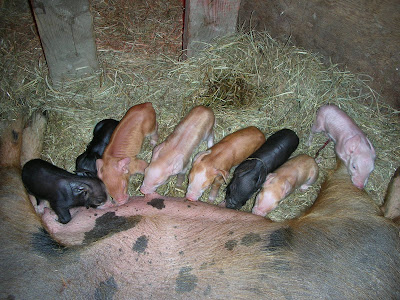 She had 8 perfectly healthy little ones. She started farrowing, very conveniently, when I was on my way home from work. She looked perfectly normal when the Big Man did his 3:30 check; by the 5:30 check there were four piglets nursing. 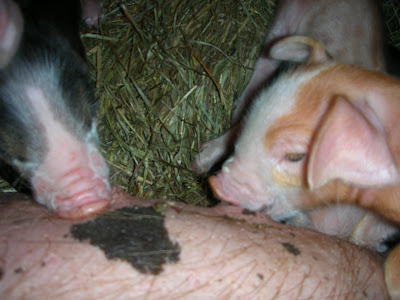 She was very gentle with them, even as she struggled to get the rest out.

A long pause between numbers four and five meant that the shoulder high glove and baby oil were called into service; a little one was found, and the presence of a hand where it shouldn't be inspired Scar to push all the harder. Another followed that one quickly. Then she quieted, and we watched her for a while and went up to make dinner.

When the Big Man went down to check about half an hour later, number seven was sitting on her head. Number eight popped out within ten minutes. 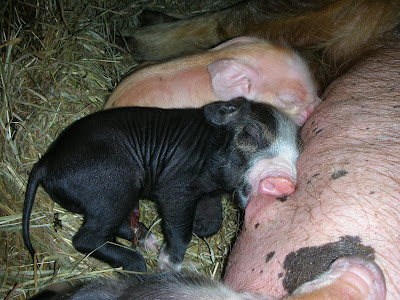 Amazingly, they all knew to turn toward her belly as soon as they were out; not one turned toward her back. Scar managed to keep them all alive through the night, even though the power went out and the piglets were thus without a heat lamp. The Stupid One predictably died the next night (having failed to understand the extremely critical difference between lying next to warm mum, and trying to burrow completely under 450 pound crushing mum) but the other seven are strong, alert, healthy, and definitively out of the thickest part of the woods. It was a perfect first farrowing experience, for farmers and pigs. And, Scar seems like the perfect mom, very responsive to any distress noises, gentle, and smart at orienting her teats toward the heat lamp for easy, cozy access.
And then, Spot had piglets.

She must have started about 1:00 or 1:30 this morning, because when the Big Man went down just after 3:00, there were seven piglets milling about. One was in a corner, near death with cold. One had a giant gash on its upper back leg (its future ham). Another had a smaller, but still deep, cut on its neck. One didn't seem to be able to use its back legs properly, and, like Stupid Pig, preferred to try burrowing directly under mom to any other course of action. Spot's deep in the woods brood
This is a lot to take in at such an impolite hour.

Our first step was the cold pig. She looked dead, tongue out a little and everything, but like Wesley of the Princess Bride she was only Mostly Dead, which is indeed a very different thing. Ten minutes in a pot full of warm water in the kitchen sink revived her (just like this); another forty minutes in a box, wrapped in a blanket on a heating pad, seemed to do the rest. (She is the white-faced black pig in the photo above.)

Then there was some light surgery on the kitchen counter -- out came the Big Man's sewing kit. The leg was stitched up pretty quickly, and looked a lot better, but this piggy is definitely on watch. We're going to keep our eyes on the wound for signs of infection, and get some antibiotics on hand just in case. But for now, he's just as active, whiny and hungry as the rest.

The pig with the smaller cut, and the splay-legged new Stupid Pig, are on their own for now. There's not much we can do with them, save a 24-hour watch to continually yank Stupid Pig out from the crevasses made by mom and the floor, and the cut is too small to effectively be sewn. But, there will be many walks to the barn today.

Spot seems to be okay, but she's on watch as well. She seemed too tired to remake her nest after birthing, so her stall is a bit disorganized and damp. It's hard to tell how much redecorating intervention is necessary -- damp is definitely not good, but fluffy hay isn't necessary good either as it's hard for the piglets to navigate through. For now, at least, the piglets are nested under the heat lamp while mom undertakes the odd and somewhat unsavory task of eating the afterbirth, and the more normal task of trying to get some brief shut eye. The deepest part of the woods for these little guys is not going to be over for a few days yet. 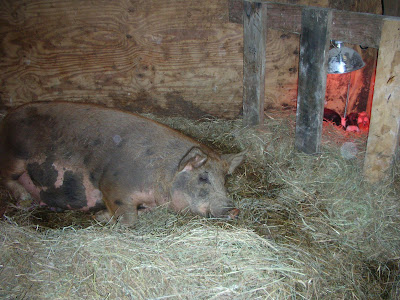