Refugees and the New World with Others

In the odd world of chicken relations, the war is over; only sparsely feathered refugees remain. 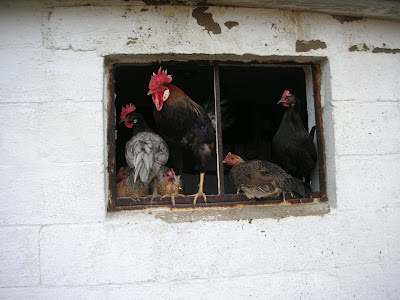 Victory was predictable and swift. The leghorn rooster, with his overwhelming force and entrenched power structure, quickly stifled the rebellion led by the newly empowered modern game rooster with his small and ragtag force of young hens. There was no no-fly zone established, no aid to the splinter group, no delicate diplomatic workings behind the scene. In fact, when the rebels attempted to move into the barn and secure the stockpile of resources therein, we put the barn on lock-down, chasing out illegal infiltrators with long poles and loud screams. You see, even tacitly allowing them to use our territory to further their cause, we felt, would signal a level of support for the rebels that we worried would be misinterpreted. The leghorn, it is important to remember, had the best egg-layers on his side, and we have become so spoiled with a readily available and seemingly endless supply of eggs. A sunday without omelets seems so bleak, so un-American...


And thus, early one morning, the modern game rooster was found dead, unceremoniously dumped in a box of trash. His followers were nonchalantly grazing about with the leghorn, taking care to stay in line. He watched them all with his haughty, glinting eyes, as he is wont to do.

But while one might suppose that "to the victor go the spoils," these heartless winners have forsaken their homeland, the coop, instead electing to move into the fittingly apocalyptic environs of the milk room of the barn, which we had been using to store scrap metal. So there they roost, at dusk, on an old grill, a pile of thin metal bars, a heap of wire, peering out of glassless windows when anybody slinks by. It is unsettling, but we still get our eggs. 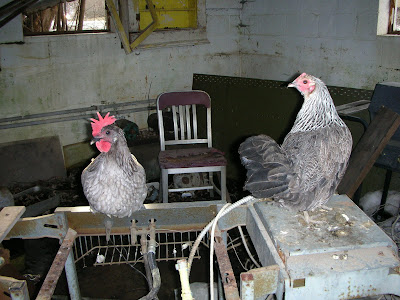 Last Friday we moved all the sows and piglets into the large stall, with a door, always open, to the outside pen. Chaos immediately took control, as giant, agitated sows circled each other, braying and barking in a show of force to claim the best territory. Piglets were overwhelmed and confused by the sudden explosion of teats and teat competitors, and swarmed on any prone lady who happened to leave a hint of teat exposed. In the ensuing competition, ears, cheeks and backs were bloodied. Squeals reverberated in the barn rafters, much to the annoyance of snoozing barn cats. Every possible relationship had to be tested: friend, foe, accomplice, snuggle buddy, flirting buddy, wrestling buddy.

As of today, thankfully, things have calmed considerably. Besides settling into an uneasy but stable hierarchy, the sows have figured out that nursing in sync saves them from the starving mob, and the piglets have found distraction in ripping off bits of bushes to teethe on and batter back and forth, and they are still very much in the run-in-circles-then-sleep-all-afternoon stage. Piglets who prefer to snooze complacently found each other; piglets who prefer non-stop contact sport found each other. Despite the unseasonable (horrid) March temperatures we've had, there is a determined corp that ventures outside to nap and nurse in the sun afternoons. A good portion of them delight in moving dirt around with their noses, for no reason but the pure joy of molding the landscape. They are almost as interested in corn and oats as they are in milk...they grow up so fast.