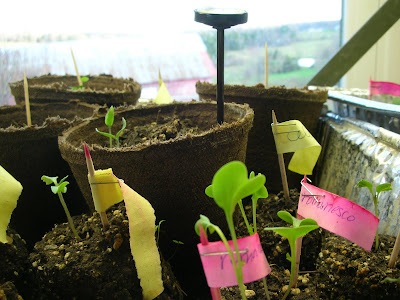 It is the end of April, and I am happy to report that the 2011 garden is off to .... well, it's off to SOME sort of a start, and that's saying something with this Spring's impolite behavior. Actual in-the-garden projects are behind, due to the staggering Wet that we've been dealing with. If it weren't such an obviously horrible thing for their pocketbooks and souls, it might be a solace to see that most local farmers, fully equipped with many-wheeled, many-armed tractors have also been forced to bide their time, waiting for mud to become dirt. It is one of those occasions where our behindness is not a function of inexperience or quirky equipment, but just the way the world is for everyone right now.

It seems we might be waiting a while, as each evening has been bringing with it a thunderstorm and drenching rains. And so, the garden remains untilled, the beds un-re-shaped and un-manured, the potatoes and beets un-in.

We've taken some evasive action -- the Big Man planted a few hundred onions in soil blocks, which he placed in my Brand New Swoon-Worthy Greenhouse! 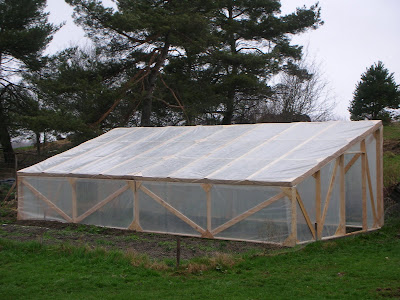 And we've moved the planned potato bed from the area behind the house, which we can't clean out until it DRIES out, and into the area of the pasture that the pigs have already tilled for us. Mud does not stall their motors, it seems. In fact, farm draft horses have been looking mighty fine these past few weeks....

Seedlings, of course, are motoring along in their cozy, moisture controlled soil blocks, blissfully unaware of the morass outside, and their pleasant view from the guestroom window. 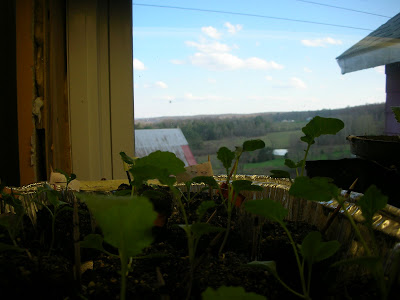 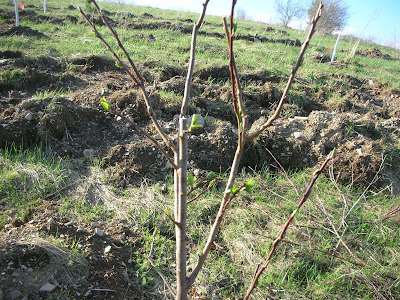 So it seems that Spring has Sprung, and thus begins the hectic tizzy of farming season. Pigs to move and grow, grains to plant, sausages to grill, sunburns to fend off, dirt to wedge under fingernails, weeds to battle, lakes to swim in. It's a good sort of tizzy, provided that one insists on a lazy Sunday here and there, with poached eggs and too much newspaper, and some evenings off to simply sit on the hillside, and watch the clouds float by over the goldenrod.