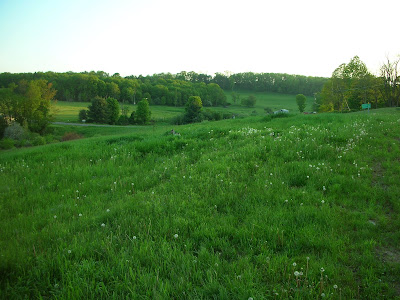 Can you find our new helpers?
Last year, when we first got our riding lawn mower, it was one of the chores we really loved. After all, this was our first Lawn since becoming Adults, and for some reason riding around on a lawn tractor felt Adult and Amurican. It was fun to put on flip flops and a sun hat, open a soda or a beer, and cruise around the yard, accomplishing something while sitting.

As the summer wore on, the novelty wore off. We had More Important Projects to focus on. The garden quickly ate up all my "free" farm time, and a series of big projects -- building the pasture fence, nursing a sick piggo back to butchering weight, buying and rehabbing a tractor, canning, brewing, dealing with the oddness of the barn well, building shelving and organizing the barn, chasing turkeys and unsuccessfully trying to police ducks and geese -- made the prospect of parking oneself on a mower for a couple hours on a nice day seem fairly absurd. 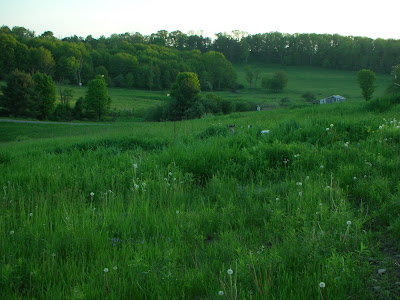 The weather this spring was the final nail in the coffin. I mentioned last week that we were growing slowly frustrated with our waterlogged hill that made plowing, planting and mowing impossible. A couple of times I ruefully thought that if we had an ox, or a mule team, or a draft horse, we could manage to move a plow through the garden.

And so it was natural that we now find ourselves with two munchy little helpers, Goat with No Ears and Goat with Giant Ears. We named them after two totally normal goats in an "Animal Freak Show" that the Big Man and I paid $1 to visit a few summers ago. Goat with No Ears actually has tiny ears, being a cross between a no-eared breed (LaMancha) and a normal-eared breed (Boer). Goat with Giant Ears basically just has normal ears. 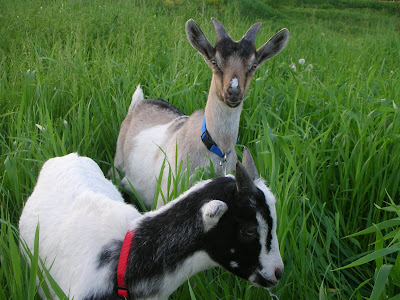 They are really a bit small to keep up with the grass…but they will grow, and in Busy Season as we are, we'll take all the help we can get. 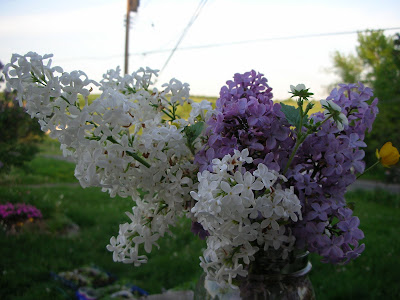 The Grandma Lois Memorial Garden Season is off to a good start with a bumper crop of lilacs.

More posting soon – this is an extra busy weekend here at the farm, and I'm behind on posts anyway, so they will be often but brief this coming week or two. Goings on include the garden, which is going in thanks to an intricate system of drainage trenches that a frustrated and panicky me hacked out of the earth yesterday, the piglets, who have unlearned the electric fence due to a long power outage last week, leading us to spend hours variously amused and frustrated chasing them about the pasture, sometimes during severe thunderstorms, some funny-nosed and quiet creatures that we've acquired, and a sick chicken that we've placed in solitary confinement for Rest and Observation. Details coming soon.