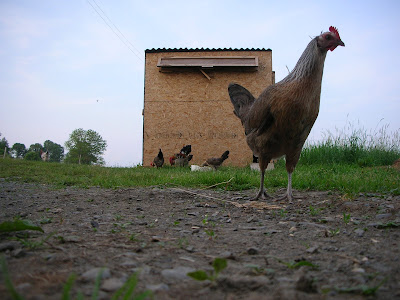 A number of you have shown an inordinate amount of interest in and affection for the motley crew of chickens living on the farm – their schisms, the power struggles and murders, their forcible occupation of the barn after abandoning their winter coop in the pasture, their disdain for the gorgeous new coop the Big Man built for them this spring.

It is time for a follow-up. 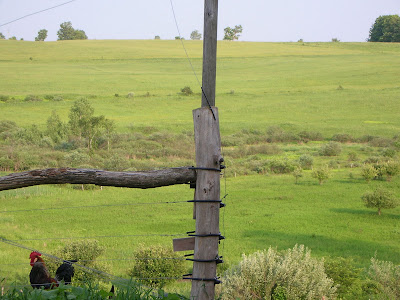 Bernie the Rooster, victor over all other roosters, horrid creature, dictator, rules the hens with an iron fist. His first lazy crows at 4:30, his more demanding summons at sunup, echo off the valley. He has at last moved his followers out of the barn and into the coop to sleep, finally tiring of our regular evening assaults with brooms. He leads them out once it is light, and has an established rotation of the yard around the barn and the nearby pasture, guiding them from hand house to rosebush to compost pile to the cool spring/antiquated piping system behind the barn, crowing to gather them together and pouncing on any that fail to stay in line. 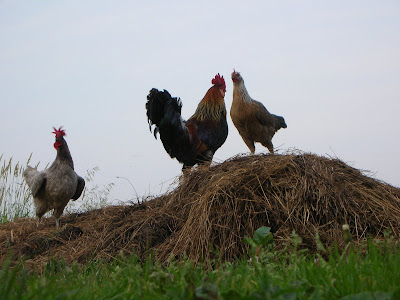 He always makes sure to have them near the gate at chore time, so he can actively protect them from me. I am, you see, terrifying. I simply must be, given his aggressive defense. My stature and the aura of power that I no doubt exude make him understand the enormity of the threat I pose to his hapless ladies. Or perhaps it is the WMD that I carry around with me at all times. Or maybe he thinks I am some giant hen who somehow escaped his wrath and needs to be brought back in line and into the coop. And so, as I walk through the gate (always carrying something heavy), he watches warily from the weeds. As soon as my back is turned, he scampers closer, the feathers around his neck flaring out and his eyes sinking into an odd, blood-thirsty mist. I whirl toward him (lightning reflexes, I have) and he freezes, one foot in the air. The feathers slowly deflate as he innocently pecks at the dirt. As soon as I turn away, of course, the flare-feathered scampering resumes, and we play this frustrating game of red-light green-light until I finally get a bit dizzy, put down my load and toss enough rocks his way to bother the hens and send him off to comfort them. 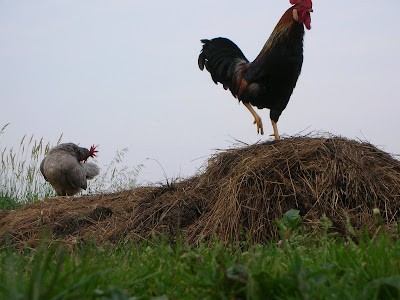 Thus, he is destined for the stock pot sometime before snow sets in. My nerves simply can’t take him through the winter, and I am tired of explaining to people how actually frightening an animal that is maybe 8 pounds can be to an intelligent and capable lady. Skeptics are invited to come visit and walk broom-free with bare legs through the barnyard. 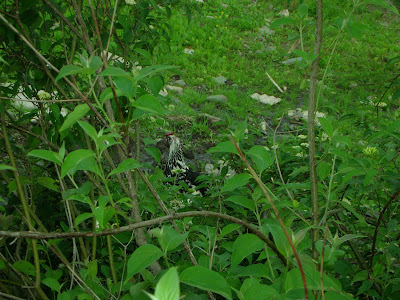 One hen has declined to be a part of his populace. She wanders on her own all day, pecking about further west than the others, and roosts in the tree behind the barn at night. I suspect she is one of the original defectors, part of the first group to leave the coop with the modern game rooster (RIP) this spring. Probably she was in love with him and can’t stand to be near his murderer. At night she is joined by another Dutch Everyday hen, who, for reasons similar or different, also prefers roosting in the tree to roosting in the coop. 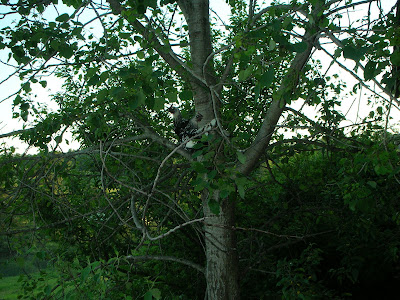 The other aberrance is Shelf Chicken. All the hens, tree roosting or not, still lay their eggs in the coop. Except for Shelf Chicken, who is a very broody hen. She does not want you to take her eggs. Her eggs are her precious and she will protect them. She protects them by laying them over the side of the metal shelf where she roosts. They fall to the metal shelf a foot below and break, slowly cooking throughout the day to form a mass that cannot be scraped up. 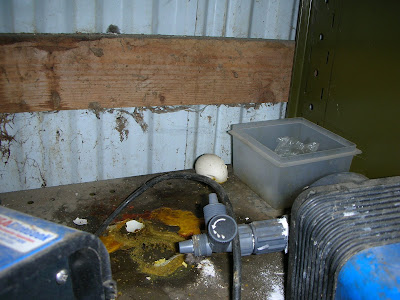 She sits a foot above them, keeping them warm and safe. For a while we assumed that she moved into the coop at night, but recently we began noticing her there at roosting time, flattening herself out as much as possible behind the tools to avoid detection. 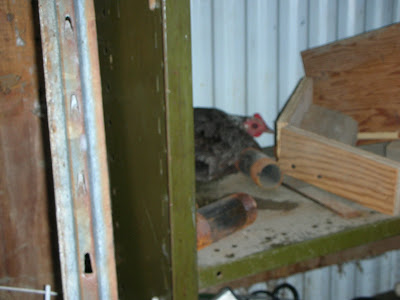 She must keep those eggs safe, day and night! 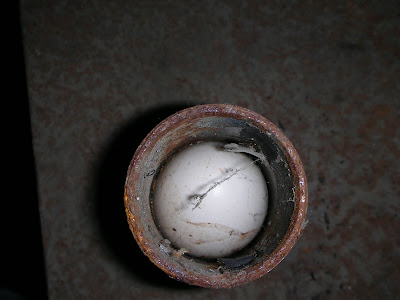 Although she did manage to protect this one from us, somehow laying it in the middle of a 6 inch piece of pipe. 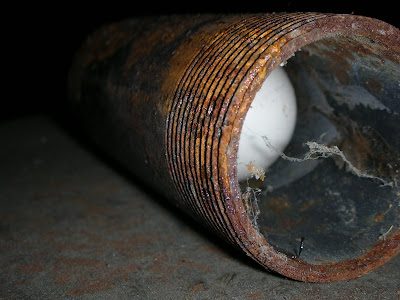