The chickens' egg production has dropped dramatically over the past month. We attributed this to the end of the bounty of "spring flush," and the loss of one of our greatest layers to a speedy haying truck a few weeks ago.* Well, it seems that the loner Spangled hen had more going on than, as I hypothesized in my last post, a grudge against Bernie and a penchant for solo exploration. 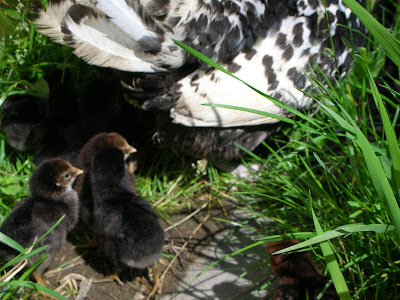 She had a mound of eggs, thirteen or so, hidden away somewhere. She hatched them, kept them secret and safe there for a couple days, and debuted them this morning. 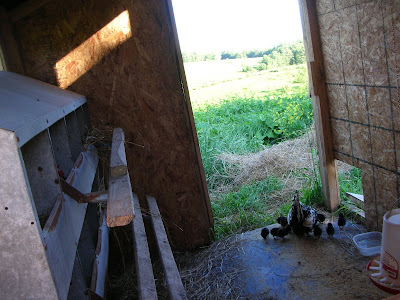 In some ways, she is an excellent and intelligent mother. She spent all day explaining the world to them by example, as good parents do. Eat this, she said, pecking at the ground. This is water; we drink it, she intoned. Here is grass, that is also good to eat. Be a little nervous around the other chickens. Watch out for barn cats. Stay together. Follow me, and hide under me when I tell you to. Be quiet at night.

She is making a different kind of sound, just like the sows when they had piglets. A very constant, low, beguiling sort of cluck. She can fit all thirteen(ish) under her at once, like a clown car. 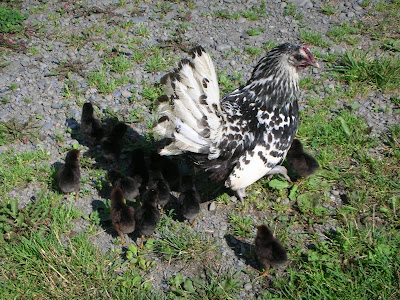 In other ways, she is very stupid, as chickens are. She spent awhile trying to convince them to roost with her in the tree. Here! she would cluck, flying up. Now you!!

They would panic miserably at the base of the tree, of course.

Then she determined that the coop, which she has always eschewed, would be a nice place for them at night, and she moved them in this evening. Again, she spent a long time confused about why they would not join her in the top row of nesting boxes. I built a ground floor nesting box for them out of a wooden crate and a lot of hay, which she got them into before, alas, abandoning them for a higher box. But when I closed up the coop (we usually don't, but LM the barn cat, as well as her protege the Black Kitten, had been showing some interest in batting at them with their paws earlier), the chicks were in a happy looking quiet pile in their box, with the Spangled two rows above them (although I could only count eight chicks in there at bedtime, and there were thirteen(ish) earlier...but there is a good chance some were underneath the others, or snug in the hay). 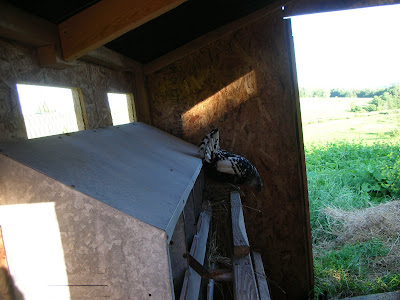 Hey, get up here!
The other chickens aren't quite sure what to make of it. When it was time for them to go into the coop at dusk they awkwardly milled about outside the door for about an hour, peering in casually or pretending to peck at food while warily eyeing the squirming, cheeping pile of browny-black fluff in the corner. Bernie made a new sort of embarrassed father cluck, but seemed a bit squeamish about any sort of acknowledgement that he might have had a part in this. I assume he will be a sort of uber-detached Don Draper character. But at least he is not, as I would have expected, violently pecking their baby eyes out. 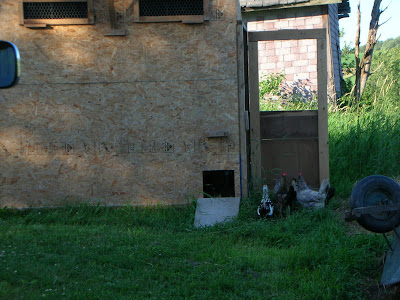 Regardless, of the many, many things that can go wrong (barn cats, chicken politics that often involve Murder and Exile, drownings, chillings, lost chicks, and SO ON) we are leaving them up to her. It will be an interesting experiment. 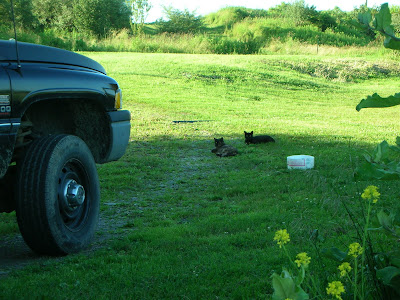 *In an eerily gorgeous scene, white chicken instantly became an overwhelming wave of white feathers rolling towards us in the air, slowly settling lightly on the road, only to be spun up again and again into the air all afternoon as cars tooled past. Other bits of her remained too, and a small group of chickadees quickly found the gizzard and delicately picked out all the corn pieces, loudly and repeatedly proclaiming their fortune to each other. Life goes on here, and quickly.