Life Happens, and also, Sometimes Not.

Almost by definition, farmers deal in life and death in near equal shares. The boar meets the sow; "piglet watch!" is penciled on the calendar 112 days later. Piglets are born, the miracle of life is observed and relished; a slaughter date is penciled in some months out. Thanksgiving turkeys are hatched in July to be of an appropriate eating poundage in November. 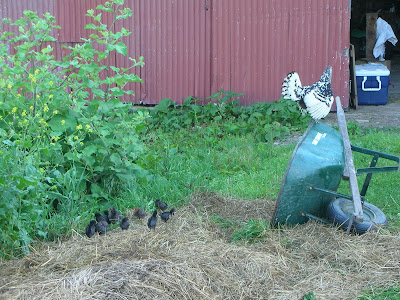 Surprise Life, Doting Mother on the lookout
Some lives and deaths, of course, are not the calendared type. A chicken secretly hatches a brood, and thirteen unexpected souls are added to the farm. Accidents happen; predators happen. It all contributes to an oddly satisfying balance -- there is unexpected life, and there is unexpected death, and so it goes. 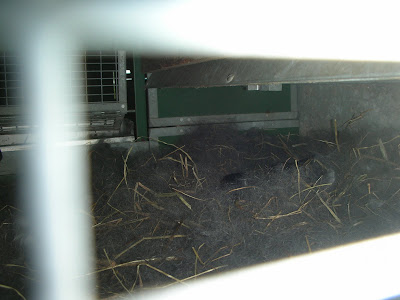 Electron Cloud?
Sometimes, Nature times these events poetically, apparently to appeal to the human sense of drama. Such a thing happened last Thursday. On the same day that we solved the Mystery of the Disappearing Eggs, there was a bloodbath in the leporaria. 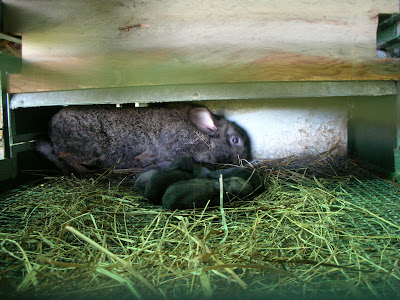 A month ago, determined to move away from the Big Three of Amurican Indistural Meat Production (the beef-chicken-pork trifecta), we got some breeding rabbits and put them in a very elegant and classy antique hutch in the barn.* We had them in separate cages at first, but the buck (following in the tradition, begun by the boar, of the male animals determining that neither our best laid plans nor our best laid fencing are enough to discourage them in their pursuits of female companionship) determined that he needed a lady, now, and he managed to bust out the wall that separated them. So, we put them all in together on a full level of the contraption. They seemed to like that. 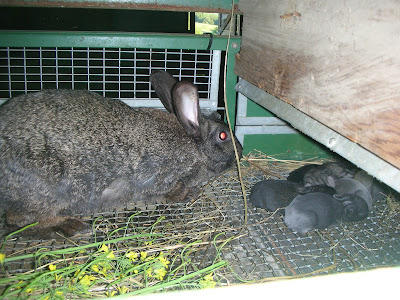 Of course, 30 days later (as the calendar dutifully noted for us) the fruits of their labor were ready to show up,** and show up they did. Brown Bunny had seven happy little squirmers, which she nervously protected from us in a tall pile of fluff, maniacally wiggling her nose whenever we got near to them. They are a week old now, which means they have grown in their soft coats of fur, but have not yet opened their eyes. Their ears seem to grow faster than any other part of them. 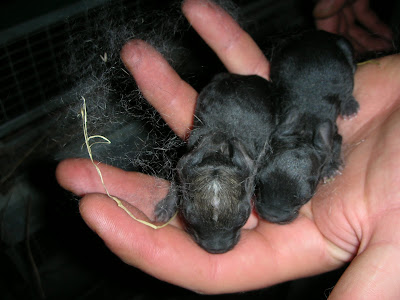 Baby bunnies can be very cute
And then, Top Floor Gray Bunny had her set. And something went wrong. There was a mighty gnashing of teeth on her part, and Big Man had to carry out one of the jobs that farmers have to do occasionally and do not ever enjoy -- putting an animal (or six) out of its misery. Two uninjured kits hung on for a few days, but it seems that she declined to feed them, and they departed a couple days ago. 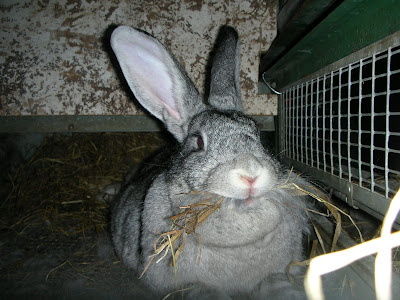 Top Floor Gray Bunny makes mustache joke, eats young
We aren't sure what went wrong. It might have been that she didn't have a nesting box and couldn't handle mobile youngsters. They might have been sick or non-viable, and she was trying to carry out the unsavory job of ending little lives for us. Perhaps she was not comfortable yet in her new surroundings (one of the reasons we didn't want to breed them right away) and had a panic attack. We'll never know (rodent brains are different than people brains, or even chicken brains), but we will be watching her closely to see if Attempt Two goes any differently, and doing all we can to stack the odds in her favor.

*They are in cages, albeit antique cages. We do not like that they are in cages. It goes against several of the things that we feel obligated to provide for our animals (sunshine, community, conditions close to those they would experience in nature....). Should we decide to scale up rabbit production, we will absolutely look into other management techniques, but rabbits present a unique challenge due to their burrowing prowess. The Romans used to build extensive rabbit gardens, with large and intense partially buried cement walls. Queen Elizabeth I had "warren islands" filled with rabbits for plucking up and placing on the royal table. Daniel Salatin, son of Joel Salatin, pastured meat enthusiast, does his rabbits in moveable outdoor pens like chicken tractors, but with slatted floors. Even so, for the 12 weeks of their lives the meat rabbits are only on pasture for the last five, and then only if they happen to be coming of age during the pleasant weather of summer or fall.

**Everything you've heard about rabbit reproduction is correct. They are professionals. One doe produces enough kits (babies) in a year to equal an entire cow's worth of meat, each female of which can go on to produce her own cow's worth of meat by 6 months of age. Multiply that out for just a couple generations and it is suddenly understandable that various locales throughout human history have had to deal with rabbit overpopulation.