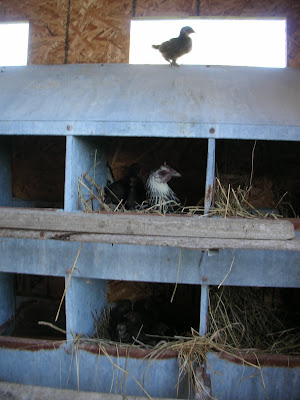 First off, sorry posts have been a bit straggly and irregular this summer; I am not writing as much as I'd like. I may have declined to explain that aside from being farmers and homesteaders this summer we are Big Man and Johnson, Professional Home Renovation Specialists: First Floor Edition. Thus far, this has included ripping off all the old drywall on the first floor, removing walls, building walls, installing giant steel and wooden beams in treacherous ways that I will in no way be describing to my parents (sorry), ripping up old flooring, repairing rot along the sill, rewiring, raising windows to accommodate future counter tops, jacking up and leveling the floor, removing and installing doors, patching holes in the floor and the walls, and insulating. It is all very exciting, and is teaching me yet again about the glory that is a cool end-of-the-day shower.
Anyway, on to the farm.

It is time for a garden update. Not of my garden, which for reasons of my sanity is off the table for discussion currently (unless someone can tell me WHY my IDIOT tomatoes are refusing to set fruit, and why in general EVERYTHING seems to be moving two weeks slower this year than last year despite getting in the ground the exact same weekend with the exact same soil amendments and the exact same irrigation system), but of the pigs' garden. 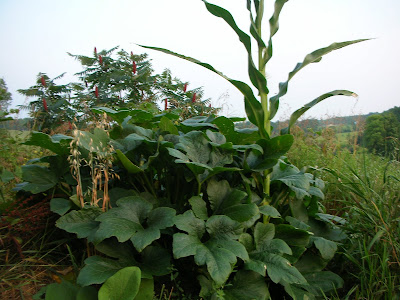 This is the compost pile on the west side of the barn. It's where we put all the hay that was used during the Feb-March farrowings earlier this year. You may notice the giant squash plant growing in the middle. Also notable is the large stalk of corn, and the little clump of oats growing on the left.

I do not know why they planted their crops in an area where only Scar, a brief escapee, has ever visited, but so they did. 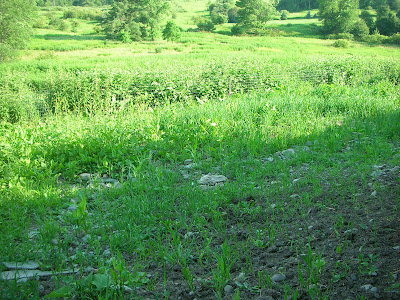 This is the "sacrificial pen" behind the barn. It's the spot that gets heavy use during the winter months, and fairly regular use throughout the other seasons. It's called a "sacrificial pen" because we don't manage it like we do the rest of the pasture (which, to be honest, we aren't really "managing" at this point..we are more "muddling through and trying to figure out what the land needs from us to remain verdant"), we just use it as a hard-fenced area to train young ones to the electric fence, and as a spot to stick animals when we need to interact with them more regularly. It gets far too much hoof traffic to keep the soil light and fluffy, and I'd hazard to guess that it gets far too much nitrogen from animal "outputs" and not enough of anything else to keep the soil balanced and healthy. I assumed it would be a brown patch of hard-baked dirt for the rest of its life with us. 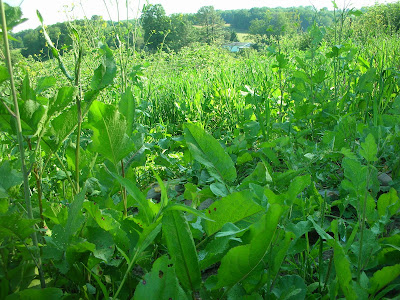 Well, shows how much I know. Besides the corn, oats and squash popping up here as well (the pigs got a fair bit of my absurdly prolific zukes last year when I got tired of them, and the oats and corn are from their feed), I found a few tomato plants in the mix from my generous sharing of end-of-the-season green tomatoes last year (before I discovered how much I care for green tomato salsa, chutney and preserves). I had always assumed tomato plants were fussy little things this far north (see: this year's garden), and was startled to see them happily growing after sitting as a seed in a pile of poop all winter long. Yet another example of Big Man's admonishment to all my frettings: Things Want To Live. 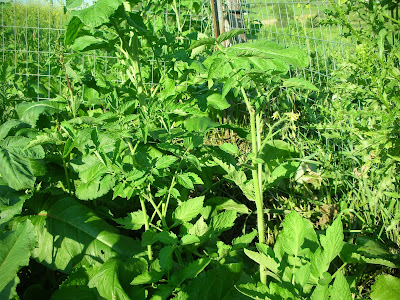 My 2012 garden plan is now: eat tomatoes. Poop outside. Repeat next year.
The Large Ladies have recently been moved into their garden with their male escort, and I was pleased that it was full of greens for them to frolic in. Their time is very close, the sun is very hot, and we wanted them in a sheltered, shady spot close by to our watchful eyes and their farrowing stalls. The fresh, organic garden access is a bonus, although it seems that they are much more interested in lounging among the greens than eating them to the soil line, so it is even possible that they will end up with some of their very own squash and tomatoes -- pig-raised for pig eatin'. Perhaps they were planning ahead for all the new little mouths they will have to feed...*

Also, brought to you by popular demand -- some pictures of cheepy new additions and a baby bunny: 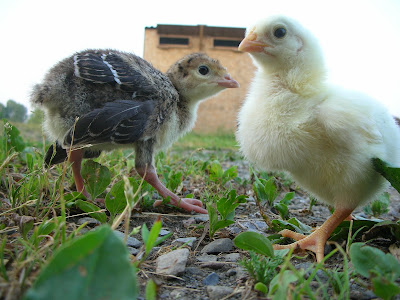 Turkey, Meat Chicken that will only be cute for about 3 more days 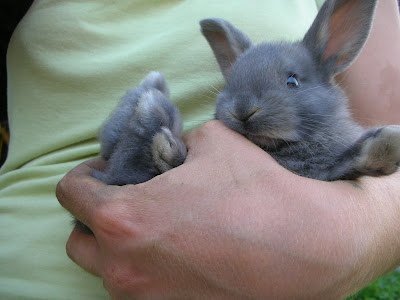 Yes; it is exactly as soft as it looks.
And, for those interested in the Sneaky Hen's Chicks: they are growing very fast, as babies of all species apparently do. Last week they moved into the nesting boxes, as in the above picture, and just tonight, she managed to move them....yes. Into the secessionist hen tree. Because if you can't win converts to your cause: make them. 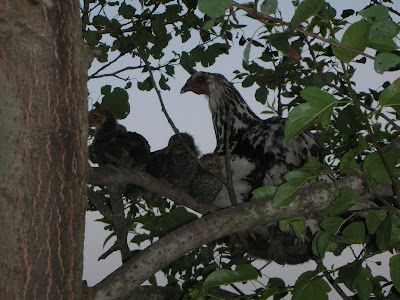