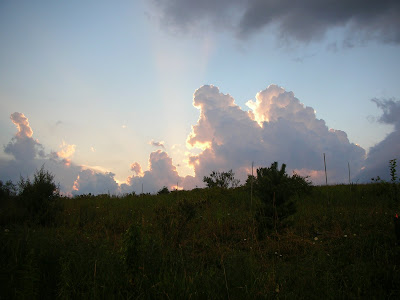 It rained early this morning, which would have been lovely if the Big Man and I weren't plowing through the fields around the barn, straining our ears for the sounds of an agitated, very pregnant, escape artist sow.


Let me explain. The large ladies, growing ever larger in their final days* were moved into their farrowing pens in the middle of last week. They were given lots of hay to fashion their nests out of, on-demand water, and all the grain they could eat in what are likely the coolest square feet on the entire farm. Of course, they hate it*, and spend their time angrily complaining at us whenever they hear us in the barn. I'm sorry you are so pregnant, we say. I'm sorry it is July and you are so pregnant. Please eat something; you'll feel better. Ruff roof rufffff, they say, grumbling, taking a mouthful, spitting it out when we turn our backs. RUufuf. Let us out. Get these out of me. 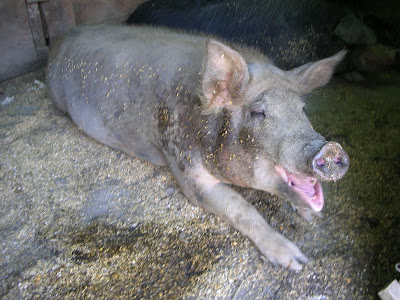 It is hard to explain the noise coming out of her mouth right now. It is not a happy noise.
Anyway, Scar started giving milk last night, and everyone breathed a sigh of relief...the end is in sight. The Big Man is a chivalrous man, and he volunteered to do the 11 PM and 3 AM checks. I was to do the 6:30 check this morning. All was calm during the wee hours. 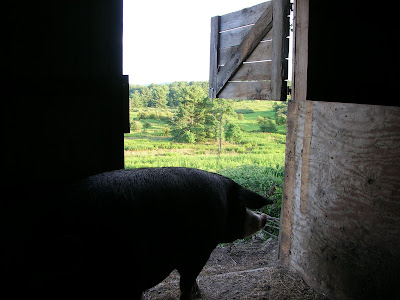 The boar gets all the freedom and none of the responsibility...a porcine Don Draper. Thankfully none of the sows are Betty.
As I, bleary eyed, in old capri pants and sneakers without socks, crossed the road to check on Scar this morning, Lisa Marie bolted out of the hayloft. She gave me an oddly meaningful look. Wait till you see this, the look said. She rushed purposefully into the lower barn.

I glanced at the chicken coop as I walked by. It seemed odd that their water bowl was right by the door...hadn't I put it on the other side? I paused for a moment, and saw a piglet pass through the tall grass on the other side of the fence. Well that's strange, I mused. They are supposed to be penned at the other end of the pasture...I wonder why they broke out. Something was likewise amiss when I walked into the barn through the open doors. The meat chicks, (there are 70), were not in their brooder, but were instead sprawled happily on the floor beside it, eating a mound of feed that had been knocked out of their feeder. Huh, thought my sleepy mind. That is also odd. So many odd things all happening at once. I walked past them to peek into Scar's stall. I stared at the pile of hay. I stared at the walls. I stared again at the pile of hay. I stared at the closed and latched stall door. And then once more at the hay.

The chicks cheeped disapprovingly as I raced through the barn to get the Big Man.

Now, 600 pounds is large, but 600 pounds in the entire outside is not large at all. And we are not talking the fenced-in pasture here...she was out in The Entire Outside. One suddenly realizes how tall, how dense the growth in the fields is. How scrubby the neighbor's property is. How many impenetrable thickets scatter the land. How far a sow could probably go if she were trotting along the road. How extremely large The Entire Outside is, even if one were 600 pounds. 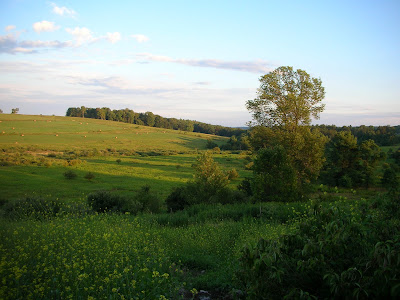 Large Outside > Large Lady
We found her after 45 minutes or so, down in the valley behind the pasture. She had hollowed out a nice little spot under a crab apple tree, and was ripping maniacally at grass to fill it up. Getting her up to the barn was a whole separate adventure (there is quite a volume of lore on how, exactly, to get a pig to go where you want it to go, which apparently indicates that they are near impossible to get where you want them...and our experience bears this out so far), but we succeeded in the end with the help of an exceptionally timely neighbor friend passing by.

She was hot, literally steaming, and stressed, and her low, full belly got scratched up by the brush, as did my silly little ankles. But she was back in the fold.

Happily so, because late in the afternoon, she started having piglets, and, as with the last time, she needed some gentle gloved assistance getting a couple of the youngsters out. She's still ongoing, we think, with six squirmers thus far bothering at her scratched belly. Hopefully they know to be gentle. 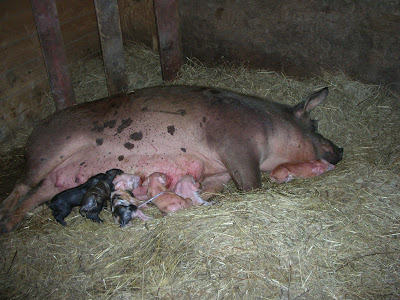 Five are hungry, one is sleepy.
*Except for Little Red. She maintains her svelte physique to the point that the Big Man is worried that she is not pregnant, or is at least two weeks away. Which she also did last time, managing to somehow hide 9 piglets in a belly that never really got big, and drop them quickly onto the ground, sans assistance and with very little warning, the very same day as the giant, super-pregnant Spot did last March.

*Except for Little Red. She gets extra eggs from the chicken coop, and beet greens from the garden, and what must be a welcome reprieve from the constant complaining of the big ladies, and the constant advances from the boar, who cannot figure out why no one has been interested in him for the past 112 days or so.