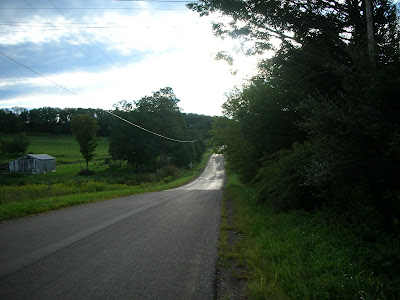 Along the walk
Since planting the orchard this spring, I have been doing my best to be patient. The 14 12 10 fruit trees will take anywhere from two to six years to start producing their miraculous pomes and stone fruits, and in the meantime I must satisfy myself with fruit from farm stands and the grocery store. The (surviving) trees are looking strong, adding shiny leaves and setting out branches, but they are all still shorter than I am, and fruit seems to be a long way coming. 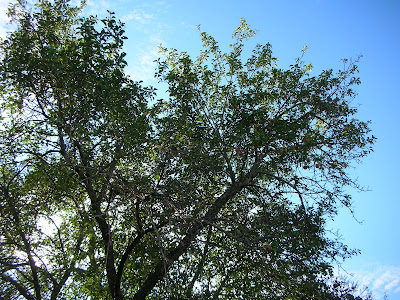 Such a large tree!! I wonder what kind it is??

Though I have peaches, plums, cherries, and pears, apples are the most exciting for me. I agree that nothing quite matches a ripe sweet peach, eaten in high summer; juice running down to elbows and dribbling off chins, but there is something about apples. And it doesn’t seem to be just me…apples pop up from depictions of the Garden of Eden to Snow White’s poisoned apple. Peaches and such represent the fleeting opulence of mid-summer; apples are for fall, when things begin to slow down and turn inward.

And so recently I have been a bit restless about the diminutive trees in my backyard, and more than a bit jealous of those whose land came with stately ancient apple trees to provide for them the exhilaration that comes along with the swift branch-to-mouth crunch of a fresh apple. 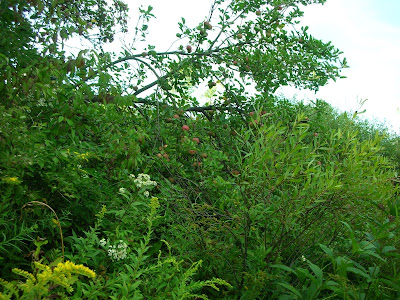 What is that hint of red???? Ursula, fetch me machete!

So there I was, stewing in my barrenness, on a lovely stroll with the Hellhound along our typical route through state land to the lake. I glanced to my left into the light forest and saw a tree several yards in, brazenly displaying bushels of bright red apples. I gawked at this insanity for an inordinate amount of time before giddily plowing through the high grasses to get to it. Nab, crunch, heaven. I was chewing slowly, eyes glassy with pleasure and amazement, when I noticed another tree a few yards further in, laden with green apples. And then another, apples a light pink. And another, and another, and another, each with more enchanting apples than the last, stretching down into and along the gully by the stream. As many as could fit into my stomach were sampled, and as many as could fit into my pockets and shirt were gathered. I was sweaty and elated (one of the common modus operandi at the farm …sweaty/elated. Other most common is sweaty/frustrated.) 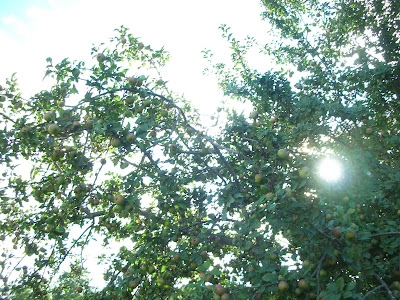 This one wasn't ready yet. But soon will be.

Now, after several days of crunching apples from dozens of trees, I can report that these are not your supermarket apples…and I mean that in the best of ways. They are your grandmother’s apples. Meaning, as in so much else, what they lack in visual appeal, predictability, and shine they make up for in flavor. Not for them the hefty supermarket crunch followed by the oddly watery, flavorless supermarket flesh. These apples are crisp and sweet with a quick tart rebuttal, juicy, and some have a subtle wine-like flavor. They are smaller than most supermarket apples (no sprays or orchardists to thin the crops), and most are not pretty in the conventional sense…they have spots and bumps and there is likely a very real chance of finding a worm also enjoying your snack. Their skin is thicker and their bright white flesh turns brown quickly after being exposed to the air. But they are delicious, and fresh, and gathering them up into bushel baskets for fall projects and winter months is absolutely my new favorite hobby….and given that there are dozens of trees in that area, near a bubbling brook and a field of goldenrod, some hidden in thick brush, I will have enough to keep me busy for quite some time. 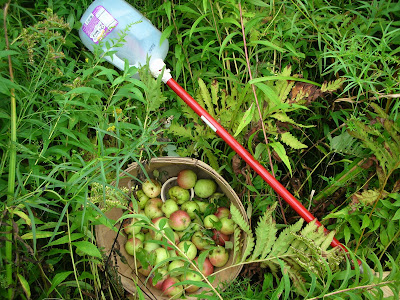 And I won’t even have to leave the property if I don’t feel like it. It was with great chagrin that upon my return to the farm I investigated three trees about 20 feet away from the house that I had assumed were crabapple trees, only to find that these, too, were ancient and wild apple trees. I spent a good 25 minutes clambering about on one that is as tall as our house (and that fittingly keeps its giant and delicious apples wayyyyyy up at the top), only to find that, despite my still above-average climbing skills (thanks, tomboy childhood!) there was no way on earth that I could get to these apples, even with such implements that I had access to. 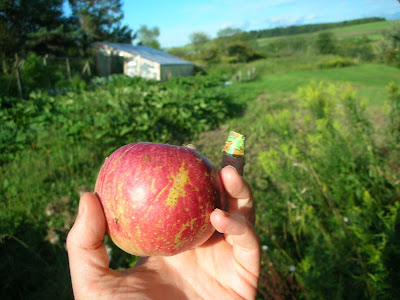 Why yes, that is a Winnie the Pooh band-aid on my finger. We got a knife sharpener! Also, apple from the backyard tree is "actual apple" sized.

Upon even further investigation that evening, I spied with binoculars some half dozen apple trees along our little stream in the pasture…which is fittingly the very same stream that the first grove follows.

My thoughts were: Johnny Appleseed must have walked along this stream, or perhaps a farmer liked to rest under apple trees and near running water 50 years ago, or perhaps the apples drift downstream and seed themselves that way. And: The pigs will be so happy when we fence in the rest of the pasture and they can eat the bee-filled dropped apples. And: I need to spend more time poking about and just looking at things. And mostly: I am going to need more bushel baskets. And then, quietly: How could I possibly have missed these???* 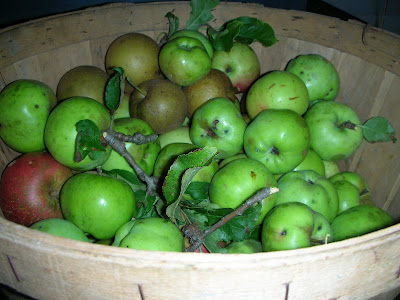 *Theories include: Always distracted by cows on hillside when walking past apple grove, last year was a bad apple year for some reason and there were no/tiny apples, only just now getting used to so much foliage that I can distinguish types, I must spend far too much time daydreaming about that which is not in front of me thus blurring that which is actually in front of me, I am an unobservant nincompoop.