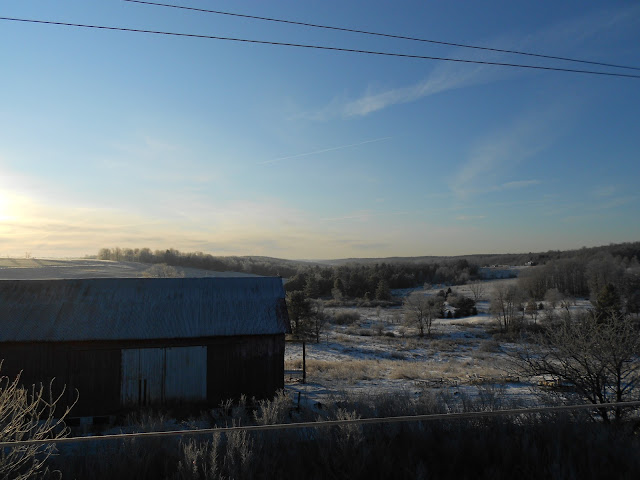 Winter this year is aloof.  Last year, she showed up via snow squall in early December and ruled the Hill with an iron fist until the never-ending rains descended on us in March.  It was a fairly taxing year, weather-wise, for us growers and makers.  This year, Winter arrives every few days, bringing icy cold winds and heavy frosts with her, only to run off overnight, leaving a muddy, damp thaw in her wake.  I look at dripping icicles and wonder what we could have done to chase her off so soon.  While it is nice to have a 40-degree-day as a reprieve every week, it also means that what should be solid ground is mud, which is subsequently tracked by hooves into (supposedly) dry bedding areas, and which complicates moving anything with wheels.  We are getting a taste of what fellow farmers in the Pacific Northwest have to deal with in winter, and it is leading us to miss our two or three months of frozen ground.


The pigs seem to appreciate the frequent balmy days.  Despite us giving them a nice, cozy, hay-filled stall indoors, a contingent of growers has taken up residence under the barn.

Besides hollowing out those cozy catacombs and then jamming themselves in, baby sausage style, the 25 of them have also been happy to play in the muddy yard, mining for yummy minerals or trying to make it to China.  They are between 8- and 150 pounds now, a first group born in early August and another group (bought in) born in late September.


The 21 young weaners, born at the end of November and weaned earlier this month, are in a little, all-indoor pen for now; they are still too small to compete with the bigger growers for food, and to handle the fences and the cold nights outdoors (chances are they would be relegated to sleeping outside as the bigger ones would claim the indoor pen and the coveted under barn catacombs).


Little Red and Missy are stuck in a deep-bedded pen indoors, taking a forced month off to recover their condition after birthing and nursing so many needies.  Actually, Missy looks fine, and did throughout nursing, but Little Red's army of hungry mouths drank up her fat stores until her backbone showed.  She went from being the fattest sow on-farm to the boniest in the space of one month.  In mid-February they will both go back with the general population of breeders.

The breeders have been having their own dramas.  We moved Victoria and Stripe in with the boar and the other girls (Spot, Scar, Tramp Stamp and Chilly) in late December, and they really had to go through some hazing.  The Big Girls (Spot and Scar) are pretty far along in their pregnancies, and have been very territorial over sleeping nests and food.  Victoria had a twelve inch gash down her side that would have required major medical attention were she a human; as is, we were worried enough to try (and fail*) to get some antibiotics injected into her.  When we went to Florida for a week (more on that later), we hoped she wouldn't take a turn for the worse and end up sausage.  Upon our return, however, we could barely even find a scar, such is the amazing healing prowess of the pig.  She and Stripe still get picked on (Stripe regularly has a little slice in her side or chunk missing from a shoulder), but either they are getting better at staying away, or the Big Girls are finally resigned to their presence in the herd, because the bouts seem fewer these days.


Meanwhile, both Spot and the boar have been acting a bit lame.  Spot's front left hoof pad is torn up a bit...nothing too serious, but it is always a little worrisome when a giant, pregnant sow has a hoof injury.  The boar likewise seems to be having some tender back hooves.  We've changed up their rations, just in case there was some sort of nutritional deficiency.  They are both On Watch (something always is), but we don't think it is majorly troublesome.

The chickens, as always, are behaving bizarrely.  I will never for the life of me understand the motivations of chickens.  Why did the chicken cross the road?  A good question indeed, and I understand why someone might wonder.  Why do some of them form seemingly random political alliances?  Why did Bernard II, Son of Bernie, roost in the apple tree with two hens one cold night last week before moving them back into the coop?  Why did two coop hens, after several pleasant weeks in the coop behind the house, return to the barn to join up with the three Uncatchables?  Why does one of the red hens lay her eggs in a small goldenrod thicket in front of the plum tree instead of in a nesting box like everyone else? 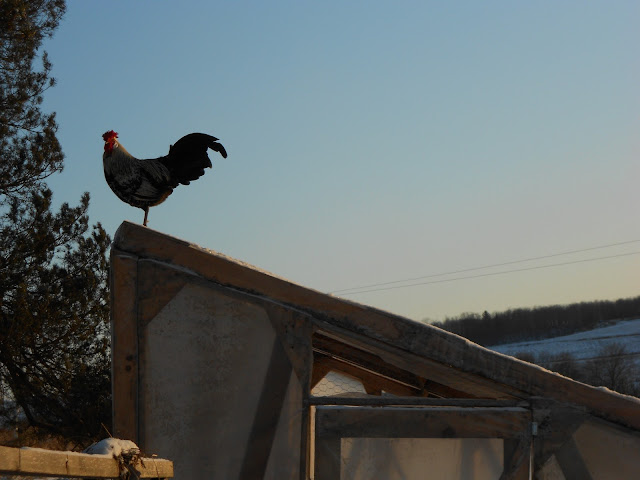 So many questions for the chickens.  But as always, they refuse to answer, preferring instead to cross the road, or not, leaving it to future philosophical generations to determine their modus operandi.


*Approaching a 300-pound pig with a giant syringe, complete with a thick needle and an intimidating amount of fluid to slowly inject into muscle, is daunting.  In fact, I kept thinking, it must be crazy.  It must be impossible.  How do these injections even exist, I wondered.  Why aren't there oral antibiotics available for swine, I mused.  Butofcourse -- the factory farm has no difficulty with this.  Breeders are kept in teensy cages and crates; they couldn't start and run if their lives depended on it.  The growers are fed a heavy ration of antibiotics in their feed, enough to keep the risk on infection from cuts at a minimum.  Victoria, however, much as we tried to sneak up on her when she was bedded down in a (large) indoor pen, was always quick enough to start up and dash outside into her (larger) pasture.  We figured that this energy meant she would be fine without the injection...luckily we were right.  Topical anti-septic spray is the way to go for us.