The No Good Very Bad Weekend

Late last week, Big Man and I were discussing our plans for the weekend when the phrase "day off" somehow entered the conversation. It was mentioned fake-casually at first. "Oh, wouldn't it be nice..." sort of thing. Really, it meant "I will go crazy if we don't..." 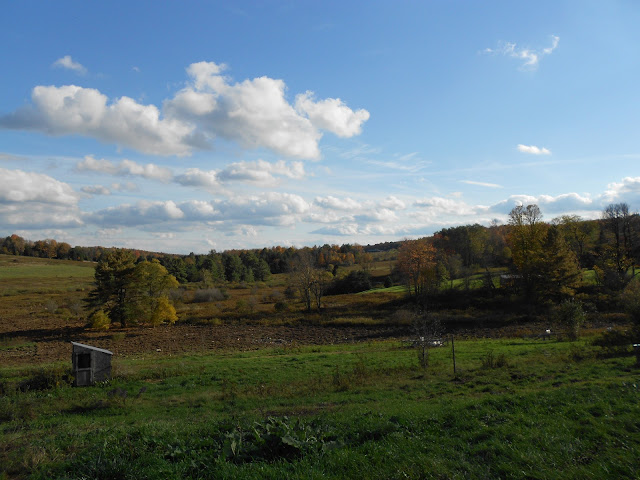 Fall sky on the farm

Big Man and I, you see, needed a bit of a break from the farm. This is necessary sometimes; after both of us pulling some version of 90 hour weeks for the past too many months, we needed to spend twelve waking hours NOT farming, NOT business planning, NOT trying desperately to catch up on laundry/housework/gardening. We wanted to go grocery shopping -- leisurely, together -- and go out to a restaurant for a happy hour (before dark!), and sit and talk about whatever it is we used to talk about before the Farm, with its spreadsheets and temporary fencing and relentless processing and delivery days, came into our lives. 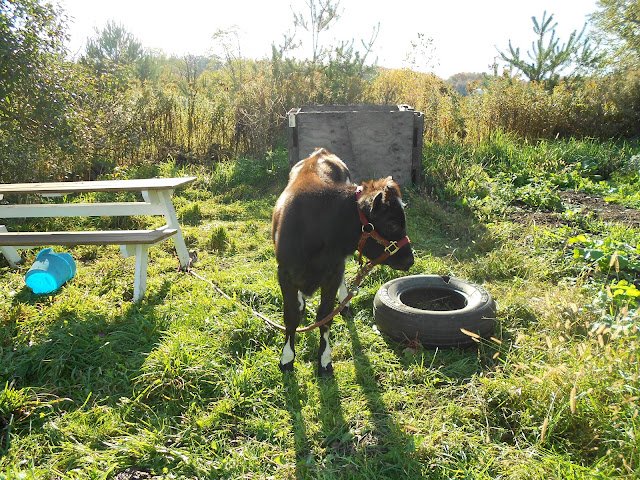 We woke up on Saturday full of naivete and optimism. Surely, we would be able to get everything we needed to get done today, we thought, and tomorrow we will galavant carelessly.

I fed the cow (more cow-like and less calf-like every day), and strolled down to the barn to check on Chilly Bear, the very, very pregnant sow who we moved into a cozy stall earlier in the week in anticipation of piglets.

Good morning, Chilly Bear! I sang into her empty stall.

I looked left and right in the barn. There was no sign of the 600 pound black sphere known as Very Pregnant Chilly Bear. Ooof.

We actually found her fairly quickly -- luckily, she had her pregnant waddle on in full force, and it is not too difficult to trace such an animal through the dewy fields -- pacing in a neighbor's overgrown back yard. Moving her, however...well, it took us about 45 minutes to get her back into our fenced-in pasture -- 45 minutes of running through burdock, raspberry canes, thickets of brambles and goldenrod -- all the while trying to keep her (and ourselves! no small task.) calm. There was much cajoling through clenched teeth, but in the end we were successful. We decided to give her an hour to cool down in the pasture before we tried to move her back into the barn. 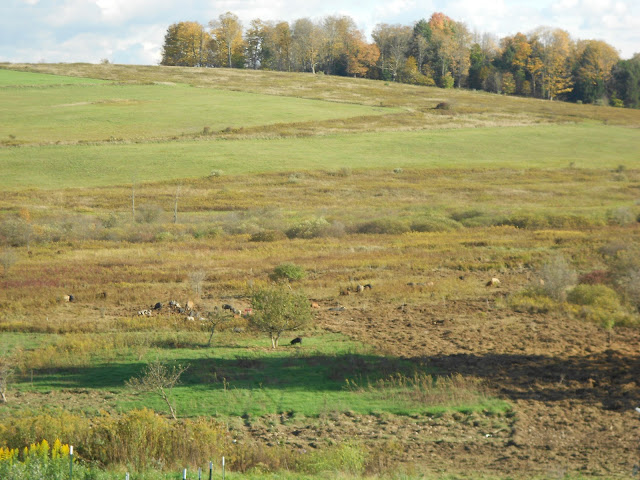 Grower pigs on fall pasture. Not much new growth to get, but they've been finding lots of roots

and grubs to keep them busy.

The one hour that we left Chilly in the pasture turned into two, and then three, as I drove into town to get some coffee, beer, and salty snacks (the Stressful Day Essentials).

On my way back to the farm I pulled over on the side of the road near the pasture. I could tell from the road that Chilly was acting oddly. She was marching about, to and fro, circling an area near the bottom of the pasture. She was building a nest.

Now, Chilly Bear is one of our nicest sows. She is not pushy with farmers, strangers, or her pig friends. She is very easy to escort around if (when, really...she is our prime escape artist) she gets loose.

However, and it all came flooding back to me as I watched her nest, my dismay growing with every mouthful of grass she deposited on her soft pile, she is CRAZY when she has piglets. She was so protective with her last litter that I was barely able to clean her stall until they were weaned; I resorted then to just piling up clean hay until she was bedded about five feet deep. Just a face peeping over the door and she would jump up, paying no heed to the fragile, nearly-blind piglets she had suddenly ceased nursing to bark at the poor curious farmer-face until it left. 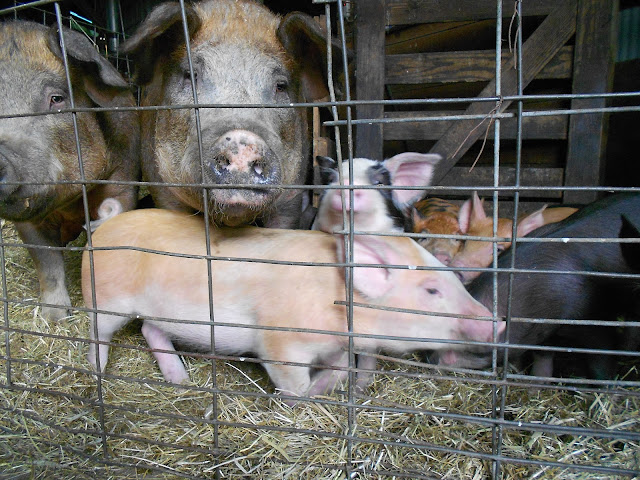 Spot and Scar Family Portrait. They are fairly tolerant of our attentions. This batch

of giant piglets is about to be weaned.

It would be hard to move her if she were nesting. Even though there weren't piglets yet, that's where she wanted them, and she would protect it with all her might. I looked at the sky. Gray, with rain in the forecast and frosty overnights. I looked at her location. Right in the section where a pipe from the roadside drains into the pasture, making it marshy in the spring and a river during heavy rains. Great. Leaving her there was not going to be an option.

We sulked down with a poking stick (technical term) and any residual optimism we had left (not much). Chilly Bear braced herself atop her nest and growled at us. The poking stick was completely ineffective, as were nice voices and descriptions of how cozy and safe the barn stall would be. She was getting more and more worked up, and I finally called it off after she started charging at us with bared teeth.

Fifteen minutes later I brought a bucket of feed out to the other breeders on pasture. As they all excitedly gathered for their treat, I saw Chilly standing on her nest, looking up at me. I played up shaking the bucket and exciting the breeders. Chilly took a step toward me. Then another. And then she headed up the hill. I never, ever thought that she would be motivated by food -- this close to labor, mamas are usually not interested in food and are basically in the nesting/laboring zone that they get into. Shows what I know about hungry mama pigs.

Once she was away from her nest, it was easy to get her back in her stall. And, three hours later, we had eleven more pigs on the farm. 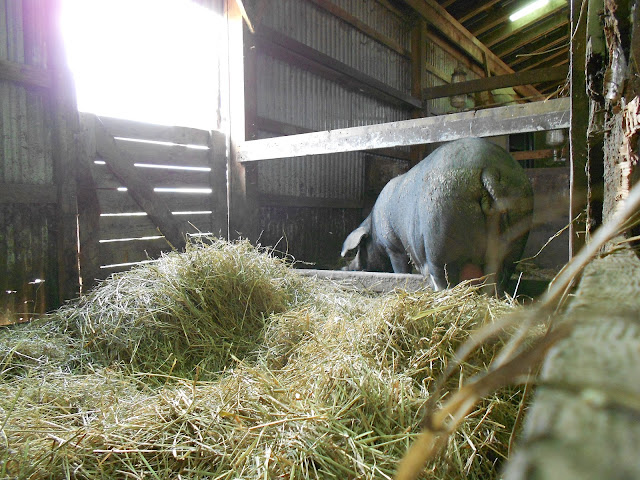 Chilly Bear's behind area the day she had piglets. To the trained eye there are several

signs showing that piglets are very nigh. We actually spend a lot

of time looking at our breeders' bottoms. Oh well.

Sunday, the day off, was even somewhat salvaged. The fence and some feelings were mended, chickens finished up, tractors/trailers/trucks back in their proper place and running in time for us to head to the zoo for a drizzly late-afternoon stroll and a warm-up pint at a pub nearby. Thank goodness for a (half) day off.