The first piglets of 2012 have arrived.  Scar had a litter last Saturday in the wee hours (she is now two for three in delivering during a power outage), such that I found her Saturday morning with eight new little ones.  Seven of them made it through the first three days of their lives.  The First Three Days are viewed, by us, as a sort of gray area where they aren't really piglets yet, merely almost-alive potentialities.  For the first three days or so, piglets can't produce their own body heat, nor do they possess much in the way of rational thought, and it is not uncommon for them to wander into cold corners and curl up for a nap, and either fade back into non-piglets or get snatched up by a watchful farmer to be brought indoors for a couple hours of warming up on the hearth.  Likewise, their need for warmth can lead them to burrow too deep into hay or under the sow, who, upon slightly readjusting her significant heft, swiftly snuffs out the life-to-be.  They know only "warm sleeping" and "nursing" and they haven't much in their tool kit to assure those things save a watchful sow and a watchful farmer willing to lend a hand when she can.  Mostly, though, you have to trust the mother, and for a 500-pound animal dealing with minute three pound sacks of skin and bone, she usually does exceptionally well.

For the first few days, we help out by training the piglets to use the creep for all their warm napping purposes, by getting into the farrowing stall and tossing them under the heat lamp in the barred-off corner every time we walk past and they are not nursing.  Most of them get the picture within the first couple days, resulting in happy, warm piglet piles in a corner where the sow cannot smoosh them.  Often the mama pig lays with her nose a bit into the creep, the better to smell her little ones.  The smartest moms will lay with their belly parallel to the creep wall, so the piglets can venture out for short trips to feed and then retreat back into the warmth.  It's a system that's been working well for us so far.


Sometimes, though, the little things make a big difference.  Spot was in a farrowing stall that had an uneven floor, and she unfortunately got into the habit of wedging her large frame in a narrow valley next to the wall.  Her piglets arrived on Tuesday night, eleven of them, and a combination of her wedging and teetering on a high point resulted in three potentialities swiftly losing their foothold on life (I was away for about an hour with a cold one.  Leaving ten healthy potentials and coming back to seven makes for a rough night).  As soon as we realized the topography was the problem, we threw down nearly half a round bale's worth of hay to smooth things out and stayed up until 3:00 am until we saw that she'd settled down and picked a safer place to sleep. 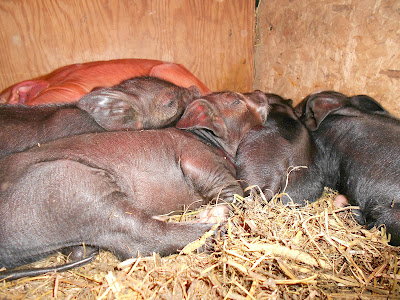 She lost another one on the second night; it disappeared, we assume, into the hay somewhere (disappeared piglets happen sometimes, which is not pleasing at all, but is just part of the deep bedding way, I suppose).  Another one slipped away on the hearth just now, the same cold piglet from the first night, who never, it seems, figured it out.  Sometimes an almost-piglet or two from a litter is not all there in the head; these are the ones that most often end up crushed, or huddled in a corner.  We don't get that down about those losses; especially with an animal that has such high litter numbers, some of them just aren't made to cut it. 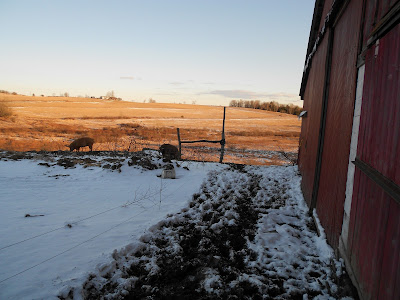 Eleven to six is the worst piglet outcome we've had yet by far, but oddly enough it is about normal, or better, than lots of folks who are raising pigs the way we are.  A local farmer went from fifteen piglets in two litters to three piglets from both litters combined.  Another local farm is pleased when they get four or five survivors from a litter.  Given that this batch was mostly infrastructure/farmer error, I still feel strongly that our way is better for moms, piglets, and herd than farrowing crates.
We have two gilts (lady pigs who have never had piglets) who were bred at the same time as Spot and Scar, but are a month or so behind in gestation.  It will be interesting to experience births with new mothers again, but we are very excited to see what come of them.