Death on the Farm

Spring, the season of rebirth, is officially here, which means that it is time for a post about death.  It may seem like an odd choice, but Spring on the farm means babies, and babies season brings with it a higher mortality rate on the farm.  Piglets, chicks, and rabbit kits come into the world skin and bones, basically blind, shivering, tiny, with poor motor skills, and in urgent need of nutrition and dry warmth.  It's easy to see how sometimes things can go amiss and a new life fails to catch hold of the world.

In the last two weeks, we've lost half a dozen piglets, over a dozen chicks, and sent one hog to the butcher.  The piglets, approximately four of them dying from farmer-made infrastructure problems, were the most upsetting from an emotional and a financial standpoint.  I think it is easy for folks to visualize what it is like to run down to the barn, at midnight, holding a warmed up piglet in your arms to return to the warm hay of the stall and the warm teat of the sow, only to find said sow wedged into a crevasse along the side of her pen, with bits of three motionless piglets sticking out from under her.  Horrifying, right?  And indeed it was.  The sow was forced up, the dead piglets unceremoniously removed to the barn compost pile, the infrastructure issue mitigated by approximately one million pounds of hay.  Mental notes were made to prevent similar catastrophe in the future, but ultimately it was a sigh and a shrug and fervent vows to do better, and a return to life as usual.

The chicks are fragile beings from the very start; in fact, I think that eggs might be more sturdy and strong than a chick is.  There are always a few dead ones when the box arrives (they are over-nighted right after they are hatched), and in the first few days some will fail to learn to drink, eat, move appropriately; or a cat might peek into the brooder and send them into a panicked frenzy, leading to trampling deaths.  A night might be chilly, a day might be overly humid.  They too are transferred to the barn compost pile.

When a litter is born or a batch of chicks is delivered, we expect there to be a mortality rate of greater than 0%.  For chicks, it's somewhere around 15%, and for piglets it's similarly somewhere between 10% and 20% (litters of 8 or 9 will usually lose 1; litters of 12, 13, 14 might lose 2 or 3).  We do all that we can to keep that number down, and what we achieve is far greater survival that what would happen in nature (sows would manage to keep probably 1-3 piglets from every litter).
Similarly, but separately, people seem to get confused about how one can send an animal to the abattoir.  I figure this is because the only animal-human relationship paradigm that they have experienced or seen to any real extent is the owner-pet relationship, which is to say: not the kind of animal-human relationship we have on the farm.  These animals are not pets.  We do have relationships with them, in that we look after them, and work with them, and appreciate aspects of their individual personalities.  We are empathetic to their needs, we enjoy them at times and are annoyed with them at times.

The fact of the matter is that humans have been dealing with this sort of daily death, animal and, yes, human, for as long as people have been people.  It is only now, and only in certain parts of the world, where eating meat does not involve the meat eater or the meat eater's immediate social group actually killing the animal themselves; most people in the USofA have not killed an animal for food, or experienced the kind of routine unplanned deaths that we do on the farm.  Deaths of the young and unplanned deaths are certainly never happy occasions, but they are anticipated, and while we continually working to minimize them, we know that such events will always be a part of animal husbandry.  Deaths via butchery are also, obviously, an integral part of our business.  But these, too, fit into the ethical logic of the farm.  We strive to give them the best lives possible, which means letting them live as animals, and not as humans.  In that process, it becomes difficult for us to personify them to the extent that humans seem to want to do with everything (see Charlotte's Web, The Secret of Nimh, fables from nearly every culture, Watership Down, Animal Farm, Peter and the Wolf etc. etc. forever).  The pigs, if left to grow large, slice each other with their tusks and intimidate the weaker members out of the herd, the meat chickens will eat until they kill themselves if allowed, and turkeys are so severely lacking in brain power that it is incredible to me that they are still around today.  What we write and think about animals and their personalities says more about us, as humans, than it does about them.  I'm not saying that personified animals in literature is a bad thing at all, in fact I quite like all of the above-cited literary works.  But I do think that such depictions complicate and obscure people's ideas about raising animals for meat in a time and place where may people experience these animals only through such literature, and then maybe as dinners, but never as anything in between. 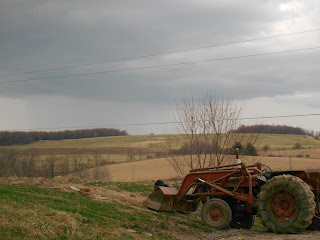 It is also interesting to see how the animals themselves respond to death.  Clearly, they do not have the brains to understand completely what happened, that the black pig driven off in the truck will shortly be an entree at a Brooklyn restaurant, that the piglet that stopped moving will, after some time, become rich soil and part of a corn patch.  Sometimes, though, in the grand human tradition of personifying animals, I wonder if maybe they aren't smarter than we humans.  Maybe they do see the piglet become the grass, and they do not think of life and death as mutually exclusive categories.  Maybe they, unlike most of us, understand the small and fleeting place that they occupy in the world, and are comfortable with that.  Perhaps they view the rueful way we remove the dead from their stalls with amusement, and pity, that we can't manage, however hard we try, to move ourselves out of the way and see the bigger picture that has terrifyingly little to do with us.