Pigs get sick and injured, just like people do. We see a large variety of scrapes, gashes, broken bones (usually ribs, usually only found during butchering), and ailments. Like good parents of infants, we monitor and discuss their excrement. If we notice worms, as we did among the breeding herd for a period early this spring, we feed them diatomaceous earth and watch to see if it works out (it did; otherwise we would have had to dose them with a wormer). If we notice diarrhea, as we did when we introduced whey to their diets this year, we adjust their feed rations accordingly (more fiber!) and keep an eye on it to see if more intervention is necessary. Sometimes an animal is sick with the flu or a cold -- for a week or so in the winter, the boar wandered himself out to the pasture, laid in a pig-nest, and refused to get up. After some time of being pandered to by us farmers, he was fine. Victoria and Stripe, breeding sows, were both the victims of large, deep, boar tusk-induced gashes. We treated those topically, kept our eyes open and waited it out (we actually tried to give Victoria a shot of antibiotics, but she evaded us and the needle well enough that we figured she was going to be fine. Which she was). We've had three pigs with anal prolapses (google at thy own risk), all of which we were able to fix up and only one of which included minor surgery. We've had a handful of piglets needing stitches, all of whom made a full recovery.

And so we meandered on, confident in the hardiness of pigs and our budding amateur veterinarian skills, and then Missy began throwing up blood on Saturday morning.

She had just had a litter of piglets -- 10 happy little ones -- a couple weeks ago and was in the barn, co-parenting with first-time mom Victoria and her litter of 6. In fact, it was when we were opening up her farrowing stall to the common area that joins with Victoria's stall when we noticed that something was really, terribly wrong.

Before Saturday she had seemed lethargic and irritable, by turns. I figured that she was slightly depressed, postpartum (It totally happens. Chilly the Pig was completely distraught after weaning. No interest in food, companionship, the boar, grazing, nothing. She spent her days laying in a sad heap and breaking out of the pasture to wander listlessly around the barn, knocking over tools and wheelbarrows. She's fine now, although she still spends more time than the other breeder pigs visiting with the younger ones through the fence.).


It became clear that I was wrong when, as I was shoveling out hay, she vomited a frothy red mess onto her uneaten breakfast. I poked around in it a good bit (this is what farmers do, for real), worrying that it was blood. Nick came over and ruled it inconclusive. However, four more bouts of increasingly viscous (I am so sorry for these words, but, like I said, it really is a part of the job) vomit convinced us that it was blood. Antibiotics were administered; three giant syringes, taking a full 90 seconds or so each to depress. The fact that Missy allowed this to happen was incredible, and perhaps the most dire sign thus far.

We were at a loss of what to do with her. She had 10 piglets that she was nursing, all mixed in and inseparable at this point with Victoria's. We didn't want to move Victoria to be with the other new moms, co-parenting in a separate area of the barn, for fear she was contaminated and would spread the blood-puke. We didn't want to separate Missy out for fear that Victoria wouldn't be able to sustain 16 piglets alone. We left them in together and hoped for the best, googling furiously and finding a depressing void of information on both "sow vomiting blood" and "farm veterinarian."

Over the next few days, Missy seemed to improve. She stopped vomiting, allowed her piglets to nurse (but only sometimes), and never failed to grunt a greeting to farmers.

On Tuesday night, I found another pool of bloody vomit. This one was especially disconcerting, because it seemed to contain a hunk of an internal organ (stomach was my guess). More antibiotics were administered. 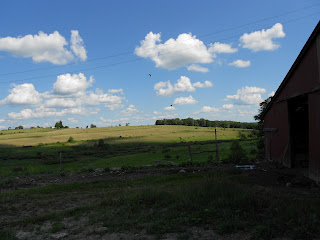 Nick found her dead on Wednesday morning. He had to shoo away piglets attempting to nurse, and chase off an especially ardent defender piglet standing on top of Missy, refusing to leave. Things like this suck to deal with just as much as you would imagine. Not to mention the fact that, when death happens, and an animal becomes a body, that is the time when you feel how actually physical the animal was, how much weight the animal carried and how much space the animal displaced...especially a sow of Missy's size (500 pounds or so, over waist-high on this farmer). Despite any emotions, it has to be dealt with: body moved, earth moved, compost moved.

Missy dying is a different thing for us than a butcher hog slaughtered for meat, economically, obviously, but also emotionally. All the animals that die on the farm get an appropriate amount of respect; it is always a solemn thing and we treat it as such. It is always, on some level, a hard thing and a messy thing, and a strange thing. But Missy's death was harder and messier. She is the first of the breeders to go. She had a personality that we knew. We had a relationship with her, and she had one with us. Logically, we know we did all we could for her given the circumstances, but we will still spend some time chastising ourselves for not doing more.

And, there are her piglets left behind. And Victoria, a first time mom with an entirely prudent litter of 6, suddenly stuck with 16 starving piglets to nurse for upwards of three weeks, she and they possibly exposed to some death virus. You better believe that she is getting all the grain she wants, and that she is being closely monitored for lethargy and loss of appetite (although, to be honest, she is so  exhausted that it will be  hard to tell if that turns into lethargy), and that we are trying our best to keep cross contamination at a minimum. So far Victoria is scarfing down food with almost a wild desperation, which is good, and the little ones are not too gaunt, though they do complain and spar loudly during feeding times (sorry, neighbors...).

Somehow, death events like this tend to be accompanied by subtle little affirmations of life. Last year's broody hen has done it again, and debuted her new little fluffballs.

Missy was a good pig soul, pushy and demanding, but attentive to her little ones and fond of carrying fresh hay to them and to Little Red (often more gaunt and tired than Missy when nursing) when they were raising up their piglets together. Soon she will be soil, and I'll likely spread bits of her on the garden in a few years. We put Missy in the ground, and we pull radishes out; that is the way it has always been, and still is.