When we started the farm, our meandering, vague business plan was to do a sort of "homesteading plus" -- raise things we'd want to eat ourselves, plus some extra, and sell the extras, learn the ropes of raising x, y and z, decide what we liked and what there was a market for, and so on. It sounded so smart and so...manageable. We patted ourselves on the backs for not throwing ourselves and our money/credit into one or two potential money-makers.
Well, manageable is apparently not an option for someone starting a farm. Theories that make so much sense when they're nothing more than theories are completely inadequate in four dimensions. For us, it quickly became obvious that it made more sense to scale up a few items radically, both because buying in bulk is cost-effective, and because to keep larger restaurant clients we need a steady supply of product. Poultry and pigs expanded exponentially, and our infrastructure is struggling to keep up with the pace of expansion. The pigs are eating 1.25 tons of feed a week, which we are still, stupidly, ridiculously, buying in 50 pound sacks twice a week, moving them from the truck to the barn and from the barn to the mixing bin and from the mixing bin to 5 gallon buckets, which until a couple weeks ago, we would carry seven at a time, twice a day, down the hill to wherever the pigs are on pasture. Now we drive a truckload of feed down to the pasture and unload the bags down there, pile it up, and drag 125 pounds worth of bags over the fence at each feeding time. It's a better system, but it won't work if and when it gets wetter. We know this is ridiculous, and every single time that we are low on feed one day after we made a trip to the feed store, or a weeks worth of pasture pig feed gets torrentially rained on within 6 hours of piling it down the hill, we feel like idiots. But that's how it happens when you go from 3 pigs to 100 in under 2 years and money stays in your bank account barely long enough for the checks to clear before it is whisked out for other immediately essential projects. You do things like idiots for awhile, and then you laugh about it when you are a few years older, and then when you are many years older you tell your grandchildren about how many pounds of feed you carried for how many miles over uneven ground, and it isn't even an exaggeration, and you grin at your partner across the room and shake your head while you think fondly about how hard and how fun and how stupid your life used to be.


Anyway, in this whirlwind, our other homesteading projects (bees, garden scale-ups, house remodeling, hops growing, etc.) became side projects that are only granted attention when the farm is running smoothly enough...which is never, if it is June, July, or August. This works out better for some things than for others -- the garden this year is is having the best summer yet (JULY TOMATOES!), despite my ignoring it more than I ever have before. I am even getting comfortable with its jungle-like atmosphere...the dense carpet of clover and purslane is rather pleasant to kneel on when one is digging root vegetables, and it makes the discovery of a huckleberry plant underneath a clump of Queen Anne's Lace a pleasant surprise. The bees, on the other hand...well, let's just hope they are happy and healthy wherever they decided to move. *sniff.*

However, we've still been interested in the self-sufficiency idea. We have a lot of people coming to the farm, which we love (and actually, at this point, REQUIRE), and having freezers full of meat and a garden full of produce is a huge help in feeding hungry farmhands. Not to mention ourselves...our city-folk appetites have probably tripled since carrying buckets and walking all day became the norm.

We still find ourselves at the grocery store fairly often. We go through a gallon of milk in 4 days, a quart of yogurt in 3, wedges of cheese disappear into eggs and roasted vegetables, and sour cream is dolloped out onto just about everything these days, from tortilla chips to eggplant dips. Some homesteading projects are worth it economically. And also, some of them are just plain fun. 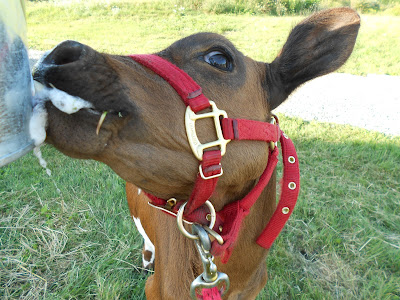 This is Beulah.  She is a jersey-holstein cross, and she is very cute.
She's 8 weeks old, still drinking milk replacer out of a calf nipple bucket, still not to keen on walking politely on her lead, still figuring out grazing and her long legs.
In the past week, I've been cramming to learn how to appropriately train her to be our milk cow. A lot of behaviors need to be taught when the cow is still your size (or, in our case, already slightly heavier), or you'll be stuck with 1,000 pounds of stubborn. Or worse -- 1,000 pounds of aggressive.
So, I walk Beulah to and fro through the barn yard, swatting her nose with a switch cut from the lilac bush if she gets too pushy with me. I introduce her to the pigs, the chickens, the indoors, thunderstorms, dark places, being manhandled while she is eating, generally anything I can think of that she will need to know (except, so far, the electric fence. I am at a loss as to how to do that one safely...).
So far, she doing pretty well with her milk cow training. She is definitely pushing boundaries, but she does respond quickly when I push back. 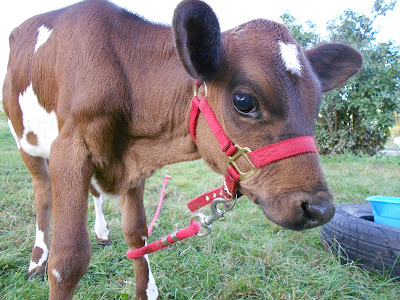 We can breed her in 10 months, she will calve in another 10 (ish), and then we will be raking in 6  gallons of milk a day for everything from butter to cheeses galore.
I've read a lot about the relationship between a farmer and her milk cow, and I have to say, it is indeed easy to fall in love with them. Especially on a farm where most of the animals will be dinners within eight months, having a working animal that will be productive and a critical part of the farmstead for ten or twelve years makes quite a different kind of impression. I am allowed to like this one.
Of course, I can't let her know that yet. Until she grows up and I'm sure that she is gentle, respectful of my personal space and keeps her kicks to herself, no doting is allowed.