We are all about having animals do the farm work for us humans as much as possible. Our small farmhouse egg flock wanders all over the property, keeping bug populations in check, turning the compost piles, lightly tilling the garden soil during the early spring months, and fertilizing as they go. The pigs are at work during pasture season helping us revamp our scrubby land; they remove thorn bushes, till and aerate the land, and fertilize. When we feed them squash, tomatoes, and open pollinated corn, they also do the work of spreading next year's seed for us. During the winter they help us break down round bales of hay and flip their bedding in their pen to keep it composting at a nice, warm speed (it's like a heated bed for them). Our house cat and barn cats keep the mice, voles, and wild rabbits at bay.

We've been missing a vital work animal for awhile now: a farm dog. The farm dog plays an integral role on today's small farm, just as they have for centuries. They mark territory to keep predators away. They chase and kill smaller predators, like the possums that bother our meat birds in high summer and the rats that bother our feed bin in the autumn. They help with herding and moving animals. They eat the bits and pieces of animals that humans don't like to, as well as helping themselves to some of the unfortunate and inescapable circumstantial deaths that happen on a farm, which keeps them fed and keeps other scavengers away.

With all this in mind, it was clear: the only wise thing to do was get a puppy.

Dart: proper noun. one who does not stop moving for long enough to have a proper picture taken.

This is Dart. Her real name is Artemis, but right now, with her slipper chewing fetish, her run-until-you-fall-over antics, and her seeming disinterest in any sort of appropriate or respectable behavior that might justify being called Goddess of Hunting/Wilderness/Childbirth/Anything at all really, she has to take some time to grow into it. It also just sounds odd to have to yell "Artemis!!" in frustration when you turn around and a gloriously happy puppy is playing fight or flight with your favorite sweater. 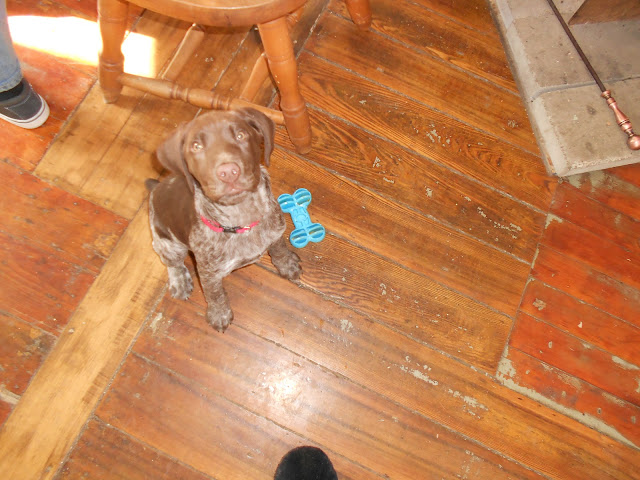 Rare (and short-lived) stillness.
In addition to being on audition and in training for being a farm dog, she is auditioning to become our newest Breeder. We hold Breeder auditions fairly regularly -- but with the pig herd. "She's growing so fast!" or "Wow, this pig has such a great personality" or "Geez, what a long body!" or "Holy hell, this pig can thrive on greens and pasture like nobody's business" -- these are all things we exclaim while observing the grower pig herd, and if the lady in question is truly outstanding enough, she graduates into the breeding herd. For Dart, though, it's all personality. If we like her, and if she likes and can perform the jobs we give her, we will be giving her the opportunity to make more of herself by making more herselfs. LOTS of small farms, you see, in addition to owning farm dogs, breed them. It's an easy thing to add on, when you already have the skill set of managing breeding dates, have the basics down of delivering babies, and generally have a good feel for when what intervention is necessary.

future-hunting
I have my fingers super crossed that Dart is a good fit for us. As a livestock farmer; it's nice to have some animals around that have society's usual "pet-owner" dynamic instead of our usual relationship with our animals, (which is actually very unusual in today's American society): the relationship of "I care immensely for your well-being, and I plan on making you into sausage." In America today, those phrases sound like a total contradiction, but they aren't really. But as old as the human-livestock dynamic is, the human-pet dynamic likely followed right on its heels. Here's hoping the Dart is a good farmer, and cheers to dozens of Clawhammer puppies in the future.
-becky