The Ballad of Lil' Bub

Time for a nice farmy story (piglet rescue!) with severely political overtones (antibiotic use in farm animals!). Ah, how often farming and heated political opinion converge....
Lil' Bub was one of the twins that we got out of Victoria on her last farrowing. She actually had 8 piglets -- but a full SIX of them were stillborn (this is an interesting issue in itself, and will get its own post someday. Suffice it to say, for now, that it happens sometimes, there are a lot of possible reasons for it, and we are planning on giving Victoria another chance). After the twins had been with Victoria for three weeks to get colostrum and a good footing on life, we moved them next door with Stripe, who had had piglets of her own two weeks prior to Vic. She could easily handle the additional mouths, and Vic would be able to move back with the breeding herd sooner. No sense in keeping a lady out of rotation for twins. 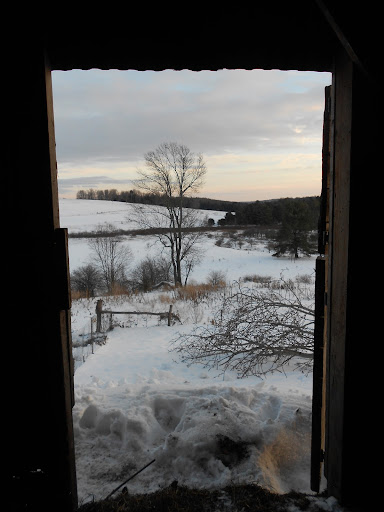 The twins got on very well with the new group and seemed to delight in having more playmates and more warm bodies around on cold winter nights. Striper didn't even notice that she had an additional two bummers arguing over her teats. All was going well.

Unfortunately for the twins, someone in Striper's litter was a tail biter. We get these, probably in 10% of litters, and probably 30% of the piglets in those litters will lose their tail to the biter. We'd never seen any negative effects of a biter (Stripe herself is actually tail-less, and none the worse for it), and I didn't think much of it when both twins lost their tails to the midnight nibbles of a neurotic piglet. 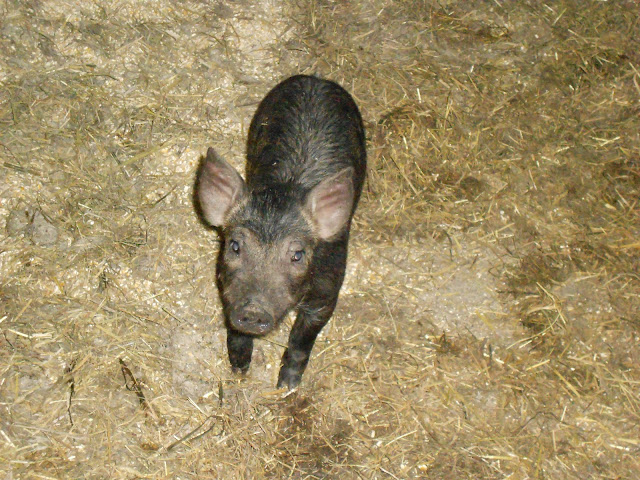 Lil' Bub
However. About a week later, in mid-December, I noticed during feeding that there was a black piglet in Stripe's pen who couldn't walk about, and was quite upset about it. A back leg seemed out of commission. This happens occasionally -- usually the mom stomped on it and it just smarts for a bit; the piglet is usually walking normally by the next day. Sometimes we'll yank the piglet out and stick them in a safe pen with no crushingly large mama until they are more mobile.
Lil' Bub's leg, though, was different. It didn't look like a bruise or even a dislocation. Her ham area was giant and hard as a rock. I did some research, and thanks to the online Merck Veterinary Manual, with which I am completely enamored, I diagnosed "infectious poly-arthritis," which basically means that a little bugger got in somehow (I am guessing through the tail wound left by the tail-chomper) and settled in the hip joint and the knee joint, populating the area with other buggers, pus, and finally, hardening it into a big knot. She was completely lame -- unable to move to nurse, unable to move to get out of the way if mama is laying down. Lame piglet is dead piglet pretty quickly if there is no intervention. 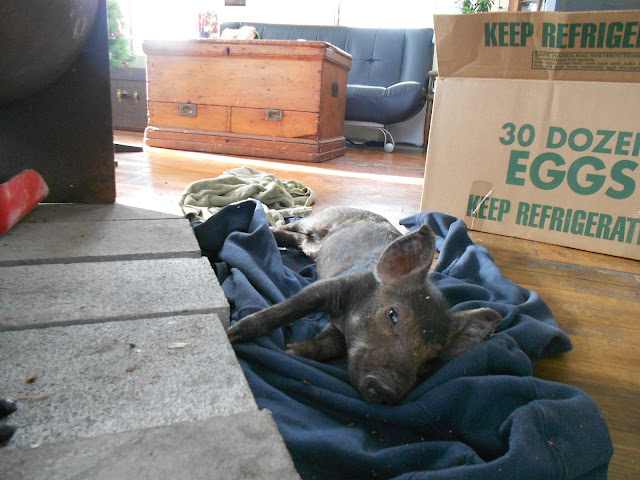 Bub shortly after she was brought inside. Very lethargic.
So she was snatched out of the farrowing pen and brought to the farmhouse, where she was immediately given a dose of general antibiotics. We followed up with a second dose a week later when the infection still wasn't cleared up entirely (but was looking better).

Yes. Antibiotics. A no-no word to some people in the local/sustainable/hormone- and antibiotic-free crowd (of which we at Clawhammer are enthusiastic members). 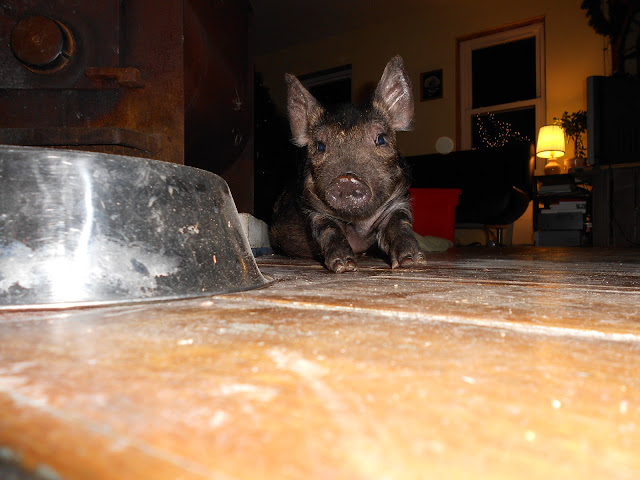 Lil's Bub two weeks into her farmhouse vacation. Much perkier.
However. As with most things, it's more complicated than No Antibiotics Ever/Antibiotics Every Day and Antibiotics Mixed in with Feed. If we want to call our meat "ethically-raised," which we do (not for the marketing, but because passionate devotion to the ethical treatment of farm animals is one of the reason we are doing this), then we have to do the ethical, compassionate thing for Lil' Bub and give her the dose of antibiotics that will save her life. It's an easy decision, really, when faced with a tiny little piglet, in pain and immobile, but otherwise healthy and strong, as a farmer armed with syringes, vials and the knowledge that a quick injection or two will provide the animal with as full a life as any Clawhammer pig could hope for. For us, it is not worth compromising that life and that ethical choice just to get a higher marketing dollar.

The withdrawal for that antibiotic is 9 days, which means they will be looooooong gone from her system by the time she is slaughter-weight in seven or eight months. Her ear will be notched, though, and she can't and won't be sold as "antibiotic-free."

Bub spent three weeks in the farmhouse, recovering from the infection for two, and learning to walk and getting some strength back for one. She lived in an cardboard box full of wood chips and drank calf milk replacer (which worked so well that she got nicely roly poly) next to the wood stove. When she started to become incredibly annoying -- able to climb out of the box and scamper around the house -- we figured it was time to reintroduce her to pig life. 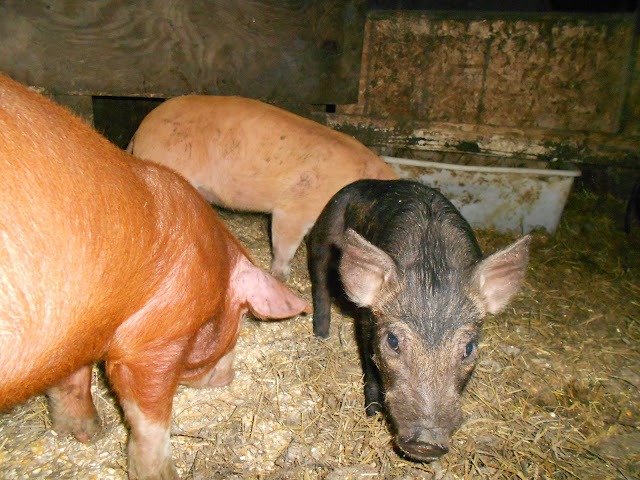 Lil' Bub, skeptical of new friends.
We moved her in with a group of weaners -- slightly bigger pigs, but not big enough to pose a danger to someone still getting her legs completely under her. She seems to like the company, but she is definitely a little bit grumpy that she has to share anything with anyone else (especially 8 other piglets bigger than she is). But within ten minutes the older pigs were showing her how to eat and LOVELOVELOVE their bit of corn and oats and their stack of hay, and she was quickly happy to be snuffling in that.

Really, she's not out of the woods yet. She's the smallest pig on the farm, which is always a bit of a fraught position, but we are planning on half-opening a door to one of the stalls off the main barn, so only little pigs can get in it to sleep. That way she won't have to fight for bedding territory with 200 pound + animals. But she does have a fighting chance of surviving, now, thanks to farmers who had enough time and few enough animals to notice her plight, and thanks to the miracle of antibiotics.