Well, winter has apparently decided to visit Clawhammer this year. For the past couple weeks, we’ve been struggling to get caught up and battened down– after last year’s non-winter (otherwise known as Five Months of Mud), we vastly underestimated what high winds and heavy snow dumps could do to the farm.

Drifts on the slaughter/processing area

As of now, we are holed up and cozy in the farmhouse, watching the sun set over the snowy valley.  The sun has been out for the last couple days, settling and packing the snow down. The furious cold air that jiggled doors in the farmhouse and blew snow through cracks in the woodshed has subsided…for now at least. But the next time it comes, we'll be ready for it. 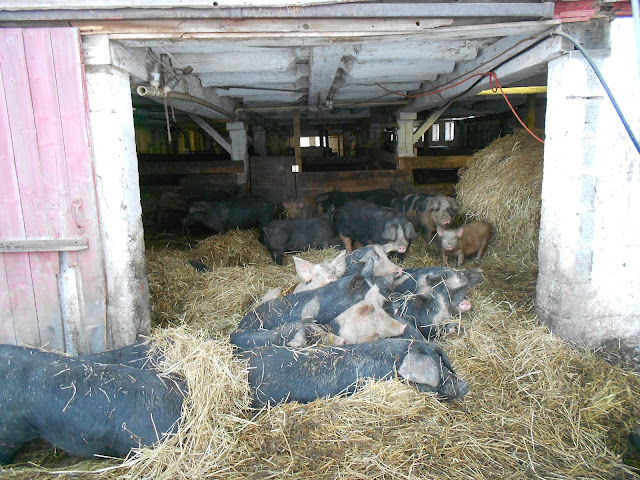 The growing herd is bedded in the barn on wood chips and hay. We routinely deposit a fresh 600 pound round bail of hay in their area, and they spend a couple weeks disassembling it, spreading it around, laying on and under it, and eating it. When it is blustery out they tend to just bury themselves in the hay and snooze all day. But despite cold or snowy grounds, they still spend a good bit of time in their “yard,” an outdoor pen we have them confined to for the winter along with their barn space, burrowing in the dirt and sunning themselves on the hill. We have to restrict the amount of outdoor space they can have in the winter, in fact, because they spend so much time outdoors. It isn’t good for the land to have so many tromping feet and burrowing noses reshaping the land during a season when foliage can’t grow back. Farmers call these winter pens “sacrificial areas,” because it will be a long while before that land can be used for growing crops or forage. It’s an ongoing challenge for me to navigate between my empathy to give the pigs wide open spaces at all times of the year, and my empathy for the delicate balance of the hill (prone to erosion), the valley (full of delicate streams) and the soil (always, always, wanting to keep it airy and light, not packed and dense). It’s an ongoing conversation, between the herd and the land, but I do think I am getting the hang of guiding the discussion.

Growers burrowing in the yard

For the first winter ever, our breeding herd doesn’t have any space in the barn. I am semi-overly protective of them (they are, after all, the real bedrock of our pig operation), and I was nervous about how they would fare in Actual Winter. To house them, we ended up using (after a major fail involving some apparently delicious tarps) a well-known pig farm trick. We sawed a 2500 gallon plastic tank in half and cut in doors. Viola. Pigloos.

We filled them up with a LOT of hay, and surrounded the pigloo area with even more. That helps insulate them and acts as outdoor bedding for pleasant nights, or for nights when we add in new pigs and they go through the inevitable hazing period and aren’t allowed inside for a few hours.

Our little farmhouse egg flock has moved from the coop into the barn. I had been meaning to relocate them into the greenhouse of the garden for the winter so they could, you know, fertilize and aerate and so on, but never got around to it (which is actually lucky, because a big section of the greenhouse roof collapsed under the snow last week). Instead of making their way through snow taller than they are each morning and night, they’ve decided that the barn is cozier, and that is where the grain is stored, and that is where the cat water dish is, and that is all better. It’s slightly annoying, especially because I have yet to find all the nooks and crannies where they have been hiding their eggs.

We also have a house piglet who has been inside with us for the past three weeks. She had an infection in her back leg and couldn't walk, which is a major hazard for 5 pound animals with a 400 pound mama, so in she came. She got two courses of antibiotics, the infection is gone, and we're working on getting her strength back in her legs. In the meantime, she has the coziest spot on the farm: a woodchip filled box right next to the wood stove.