Birth and death are a farmer's bread and butter, and they are constant. Every Monday, we send 2-4 butcher weight hogs to the abattoir. Every month or so, we have new piglets and new rabbit kits born on the farm. During pasture season, we have hatchlings of various meat birds arriving every other week. This week is especially epic as far as Hello Goodbye, as we welcome an entire herd of an entirely new species, and say goodbye to one of the oldest and probably the most important animals on the farm. 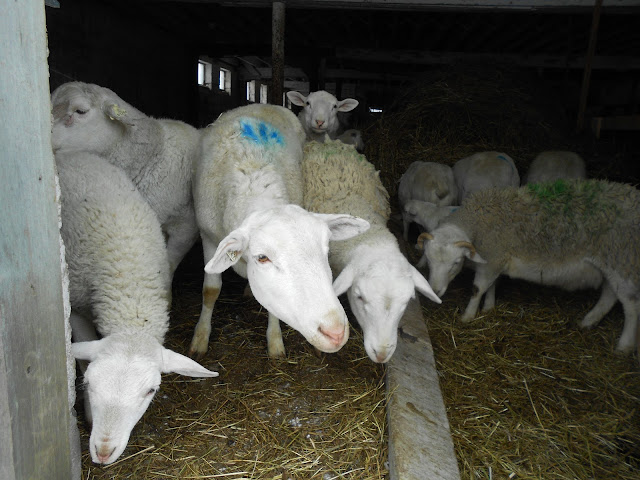 When we started on pigs, we started slowly -- dipping our toes in the water, as they say. We bought three female piglets, and then a month later we bought two more females and a male. We let them grow up together. We learned about their habits, what they liked (grass and dirt and wallows and mud and grain) and what they didn't like (being told where to go, shoddily constructed fences and gates that insulted their strength, being alone, too few piles of feed). We slaughtered one on farm to butcher for our first ever Fall Harvest Party. When the others were old enough, the male (by then called simply, The Borst) bred the females (now with individual personalities - Spotbelly, Scar, Little Red), and we had our first litters. By then, almost a year had passed since our first three pigs set foot on farm. It has taken us 2.5 years to go from no pigs to the 100+ that we have today. 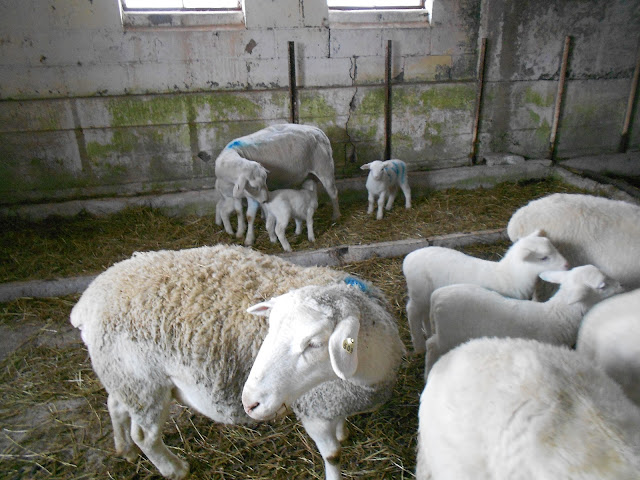 Mama and babies away from the horde.

So, going from no sheep to 42 (plus the uterine contents of 4 of those) in the matter of a couple weeks of emails, one on-farm visit, and 20 minutes of offloading is quite different for us. And it's not as if all these 42 are 6 month old "finishing" lambs ready to be sent out; it is a complete, self-sustaining community. A ram, 16 ewes (some katahdin and some dorset), 6 finishing lambs, 9 feeder lambs, 4 pregnant ewes, and 9 very, very baby lambs. It is the 4 pregnant ewes that intimidate me (self-proclaimed midwife to livestock) the most. I've been studying pictures of all the possible presentations and complications -- one leg back, head back, twins coming at once, twins coming at once with one backwards, breached presentation, sideways presentation, ringwomb -- the list goes on, and it is a lot to worry about. Never mind that Storey's Guide says that 95% present normally in a healthy herd; I am already fussing about possibilities, as I do. 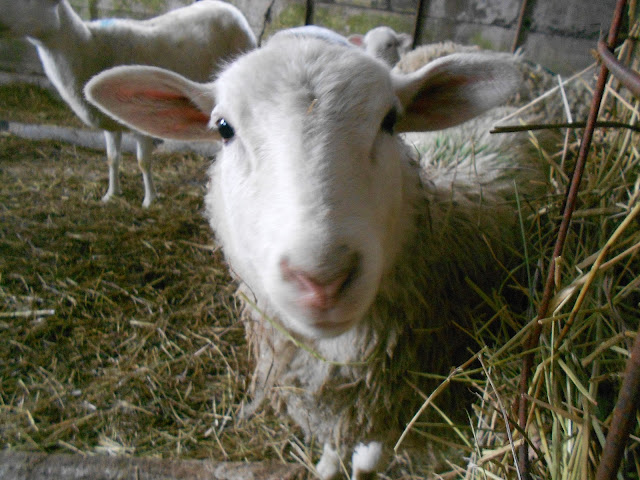 Aside from "the brown one," the "one with a black butt," the ram ("boar sheep" as we refer to him) and the pregnant ewes, this finisher lamb is the only standout so far in the herd. We've named her Curiousity, because she is always the first to run up for pats, and is the only sheep to deign to stand still for a close-up portrait.

Intimidation and swiftness aside, we are very excited about this fluffy new addition. They should work well with our other pastured animals in rotation, and they offer us a new livestock personality to learn and appreciate. We are familiar with this flock -- we'd been buying these lambs for several chefs for many months -- and there are a lot of great local resources for sheep that there aren't for hogs. Nick has experience with sheep, which is more than either of us had for pigs. More importantly, we bought this flock because they had been raised and thrive with no- to low-intervention methodology. No grain, no antibiotics, no banding the males, no whatever else can be done with sheep. They will fit in well here.

And now for the large Goodbye of the week: The Borst, fourth animal on the farm, patriarch of the herd. We've known for months that his time with us was almost done; at about 700 pounds, he is too large to service our younger sows and the new ones we are adding to the breeding herd. 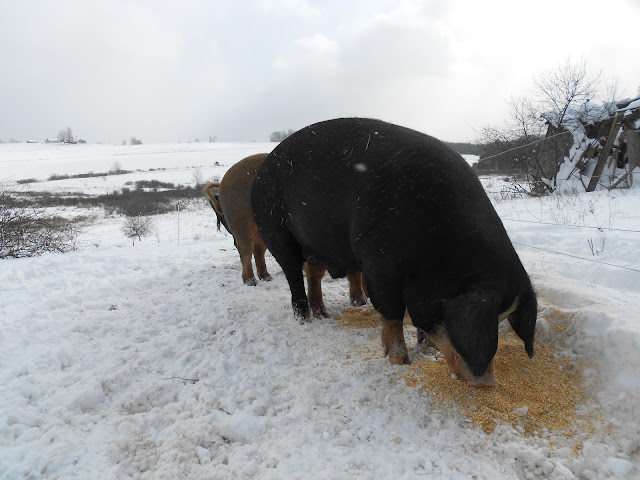 He has served us well. He's fathered dozens of litters here, set the foundation of the herd, and he couldn't have been a better animal to do it. A Large Black hog (yes, that's his breed name, as well as an apt description of him), he passed on his extreme flop ears, white blaze face, and his breed's penchant for beautifully marbled meat to his offspring. Three of his daughters are staying on as breeders, and we might yet pluck another couple out from the growing herd to join them. 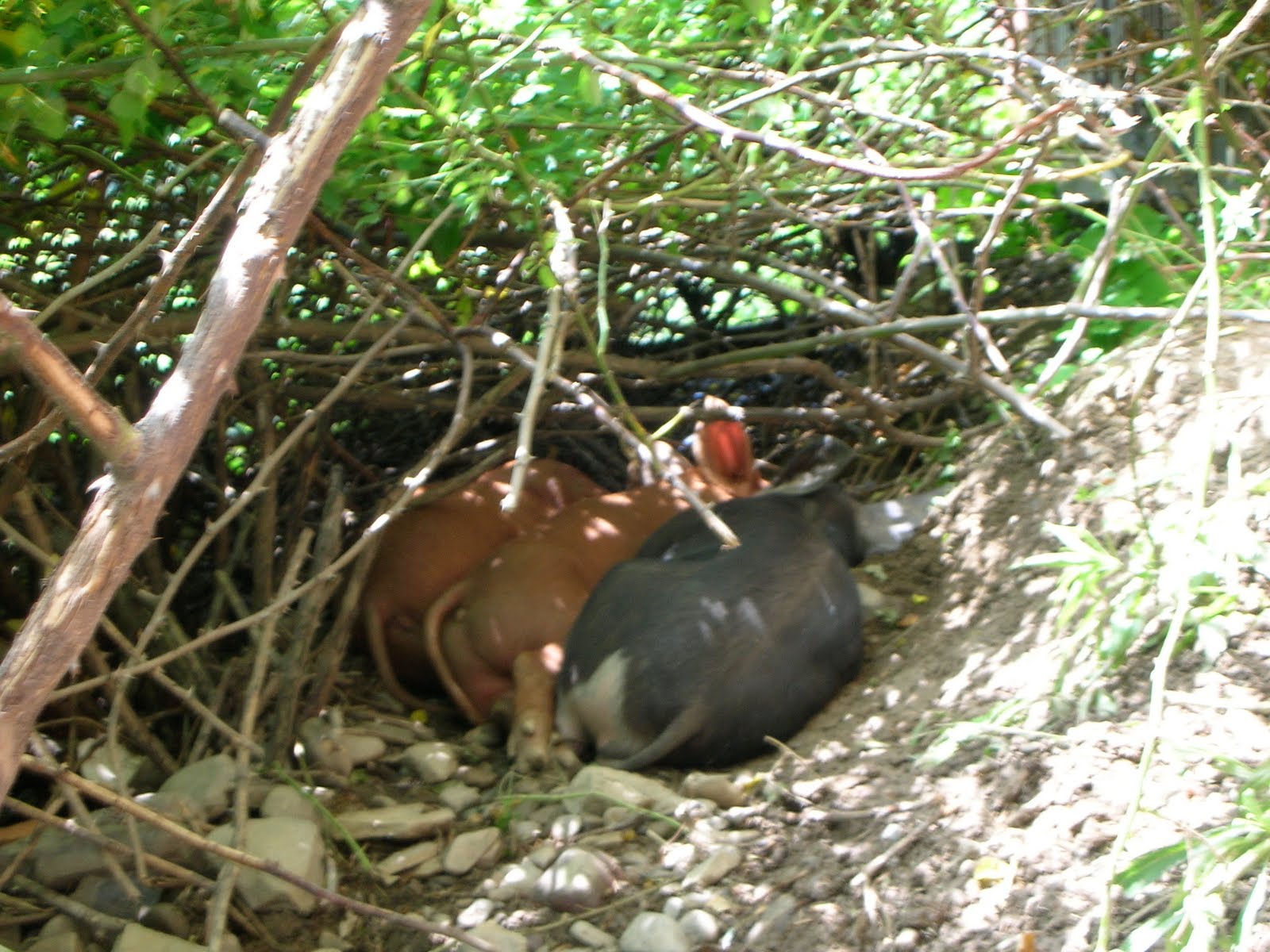 Piglet Borst with two of his ladies, hiding under the rosebush his first day on the farm.

He's going to a neighbor who has a couple sows, to spend a bit servicing them, and then it's off to the auction barn. Likely he will end up in a barn for two to three months, away from female pigs, losing the "taint" in his meat that an uncut boar near to female hogs will get, and then he will fill freezers as sausage. It is hard, seeing him go, of course, but not unexpected and not altogether sad. He was getting crotchety - violent and aggressive with the younger sows and his tusks had grown too long and too sharp to allow that. He will live on through the blood of his herd for many years. He is leaving, but won't really be gone. 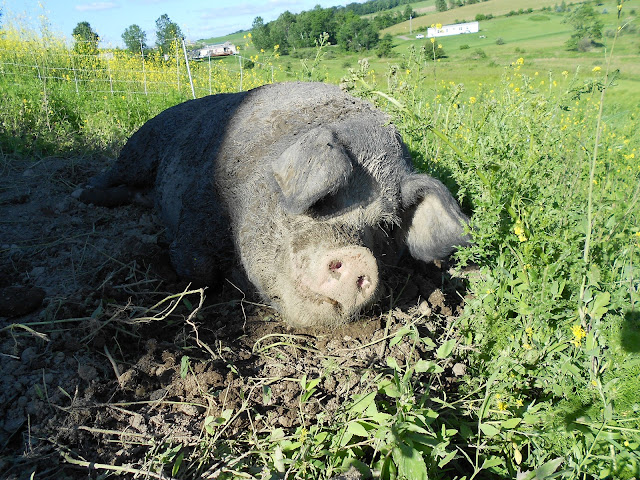 Borst in the summer, living the life.

His replacement has been on the farm for about a month, slowly being introduced to his ladies. He's very gentle, and beautifully long, and very interested in doing his job (although the larger ladies have been very particular about when they will let him do said job). He is a Berkshire/Old Spot cross, two other breeds known specifically for their marbling. He's got big hooves to fill, surely, but he will. Another Hello.