I love winter. I really do. I love the excitement of the first flurries of the season, the comfort of wrapping my hands around a hot cup of coffee, unwinding by the woodstove in the evenings, long-simmered stews, and burrowing under down comforters at night. I love slippers and scarves and rosy cheeks, the utter quiet of a heavy snow as it falls, and being able to see the criss-cross of animal tracks all over the hillsides in the morning. I love how bright a full moon on a snowy landscape makes the night once a month. 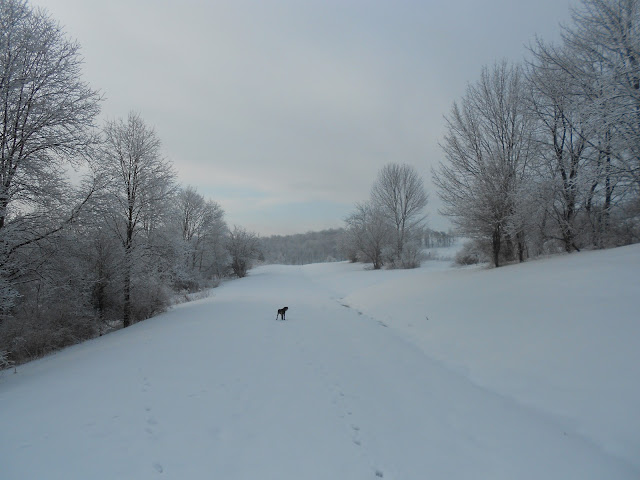 But then, every year, March comes. Ah, March. By then, even the most die-hard winter fans are weary. All the best soups and stews have already been made, maybe twice. Coats, hats, boots and gloves are onerous rather than exciting. One longs for the warmth of the sun, and stepping outside without "suiting up," and juicy tomatoes, and swimming.

And, believe it or not, farmers' March is even worse than regular people's March. It is the worst month on a farm. One of the absolute best things about farming -- being a part of the seasons and the world and the cycle of life and death -- is one of the worst things about farming, when it is March. All of the annoying things are emphasized, because daily, small tasks that are pleasant in July take a lot longer and are more difficult than they usually are. From feeding the animals, to small carpentry work, to making sure the animals have water and dry shelter, to keeping tools organized: there is something about each of those normally satisfying tasks that ruins it, because it is March. Part of this, of course, is mud. And also, snow. And, there is snow on top of mud. There is mud on top of ice. There is mud on top of pigs, and pigs sloshing through mud, not too unhappily. There are farmers sloshing through mud, very unhappily. 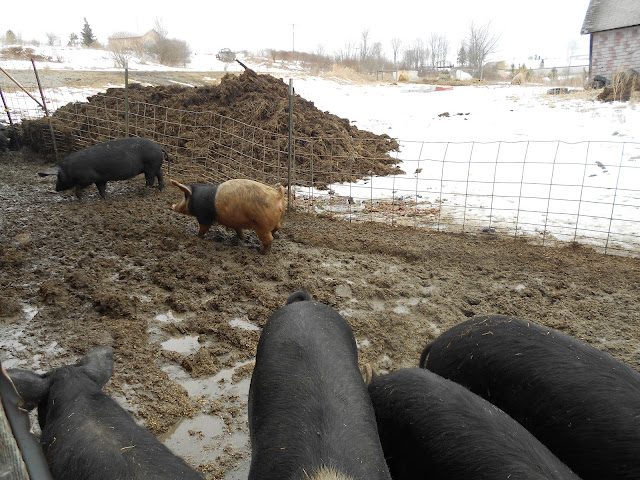 The muddy walkway between the pasture and the barn. I actually think they like it. I do not.

And, along with the powdery snows and delightfully firm ground, the pleasant hush of farmer-winter melts away quite suddenly at the beginning of March. The pace is whipped into the yearly spring frenzy of projects, miracles, and disasters. We are ready to get back at it, really, we are, I've even been doing push ups....but the weather is not ready for projects. The wind is still icy, and the air is still cold, but now with a dampness that settles into your bones. It still freezes every night, and most days still have enough snow cover to make things slick and wet. 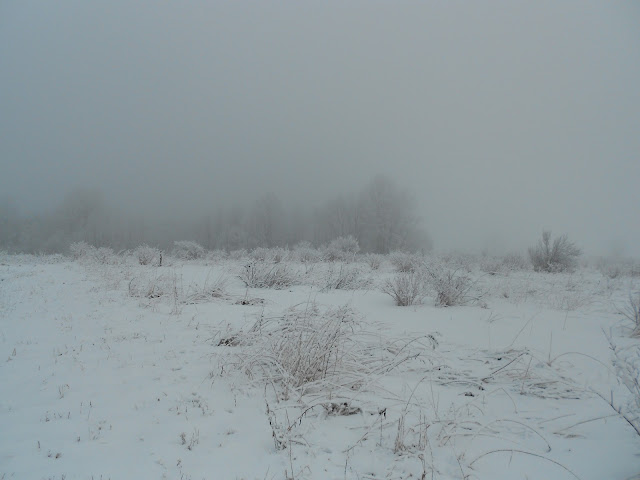 But still, the hum of a working farm, the unstoppable hum of project-miracle-disaster, kicks on. The animals have been in winter housing for going on four months and Major Cleaning is Immediately Necessary (project). Tractors and excavators are called into service. The indescribably awful muddy-icy ground does not allow manure to be moved to the actual compost pile, so little (and not so little) piles spring up and begin composting all around the barnyard. Spring birthing begins to happen (miracle), and with it the attendant moving of pigs, cleaning of stalls, extra feed/water chores, and birth checks. A few sickly animals suddenly pop up (disaster). Skinny ewes need to be isolated and fed some grain, two flagging feeder pigs need to be given booster shots and wormed, two pigs with odd and random injuries need treated. 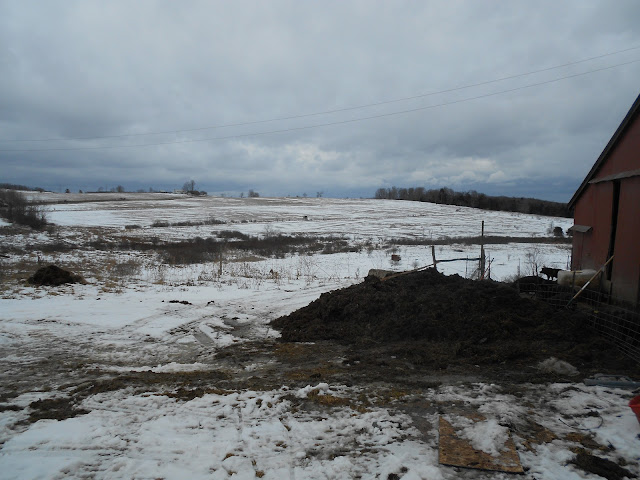 Dealing with everything on the farm in March -- be it project, miracle, or disaster -- is more difficult than it should be, not only because of the weather, but because a certain amount of self-pity bubbles to the surface this time of the year: will spring ever come, and why not now, and why do I have to do this, and why can't it wait until May. I spent an inordinate amount of time last weekend, while fixing up the barn siding, trying to remember the summer. Porch beers, grilling sausages, and swims in the lake -- they all seemed like eons away and eons ago; March appears to be equidistant from happiness past and happiness to come. As I was daydreaming and trying very hard not to hit my thumb with my hammer (because that hurts a lot more in the cold, for some reason), I dropped a nail, which immediately disappeared into the slushy snow near my feet. While I stood there, unapologetic in my sulking, muddy and wet up to my knees and listening to a group of pigs squeal at each other as they fought over some rocks (this actually happens in March), it really seemed like things will never dry out, warm up, or get green. As I searched for the nail, bare hands in the snow, the pigs moved on to squabbling over a patch of mud (also a thing that really happens), and I could hear the sheep bleating their complaints that they hadn't been given fresh hay yet. 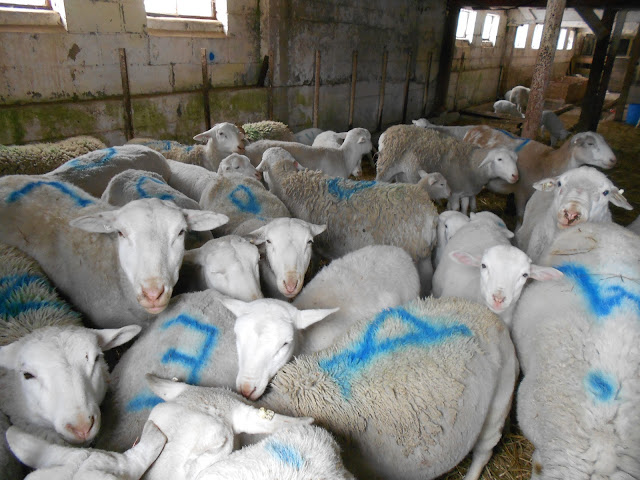 Sheep expressing annoyance at not having hay one hour ago. "Where have you been!?"

But with the mud and the sulking and the cold bones come more pleasant harbingers of Spring. The first 2013 piglets were born last Thursday to Scarsdale. Her roommate and twin Spotbelly is close behind her (this is our first experiment with having two sows farrowing in the same pen), as is Chilly Bear further down the barn in her own stall. All the spring lambs have been born and are happily hopping about in the sheep area. They are now big enough and spry enough that we put Beulah-the-future-milk-cow in with them; they steer clear of her adolescent oafishness and she is very sweet and gentle with the grownups, and curious with the new lambs. The new boar is finally getting along with the breeding sows and has recently been observed creating summer piglets with Little Red (as always, right next to the road, right as the afternoon school buses are driving by full of children). 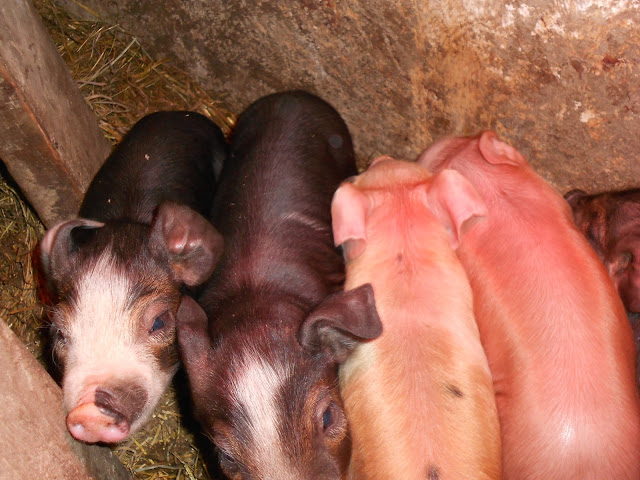 A few of Scar's piglets.

Artemis, still unworthy of the elegance of that name and going by Dart, is a winter pup and doesn't even know what spring means, beyond the fact that there are daily more smells and puddles to chase, and that for some reason we are getting increasingly upset with her as she runs across the frozen pond (I have no desire to haul her out when the thinning ice finally gives way). She is actually beginning to settle down, born partially out of maturity, and partially out of respect for the squirt gun that we recently acquired to try to keep her from hopping up stealing things off the counters, etc. (yesterday she snatched an entire block of cheddar cheese from the counter!!). She loves napping underneath the wood stove; I wonder where she will lay when it retires for the season. 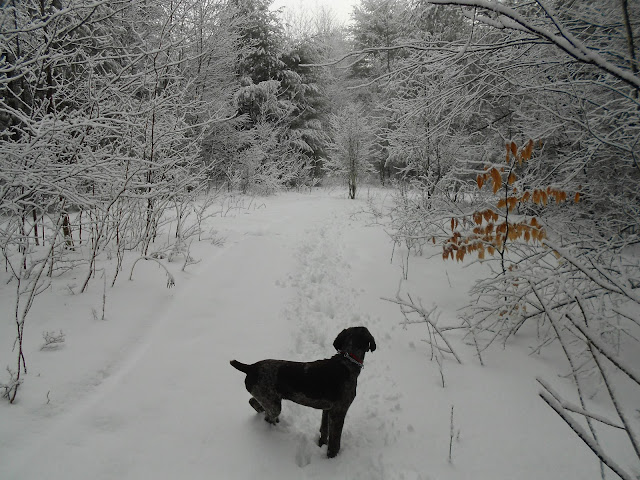 Artemis stands down the snow.

And farmers, though grumpier than in the average month, are excited to be drawing up summer plans for that season that is so tantalizingly close that it seems it will never come. It is going to be a big year -- bigger pastures, bigger herds, bigger dreams and goals. Get out of the way, March. Summer is coming.