The Roosters of Clawhammer

Despite not selling eggs from our farm (the eggs we sell are from Autumn's Harvest, our beef and eggs partner), we do have a small flock of egg birds wandering around. They are extremely useful farmhands; they scratch through and turn the compost pile, control insect populations, maintain the garden in the off-season and eat the bits of corn and edible detritus that would otherwise collect and attract rats. They are nearly free to maintain -- we buy an $8 sack of feed for them about every other month --  and the eggs they provide are extremely high quality since they have endless forage. Between their excellent eggs and their odd and funny personalities, they are a treat to have around.

One of our current roosters decides whether or not he should challenge the tractor.

We have seen our fair share of roosters come and go here on the hill, as is their rooster way. We started with five of various breeds and sizes, which were whittled down to one over the course of a winter. Bernie the Roosterslayer, later called Bernie Farmersdread, was killed by a sow a year later, likely for getting aggressive one too many times with her (I used to have to carry a broom with me every time I ventured into the barnyard to beat him off; visitors were warned of his wrath, but such warnings often only elicited amusement rather than the intended watchfulness. Without fail such visitors would dare to turn their back on Farmersdread and we would see them, red-faced and terrified, sprinting across the barnyard like their life depended on it -- which it did). Bernard II Son of Bernie was killed by a coop intruder in the night, protecting his hens. The likely culprit, a possum, was later shot on charges of killing and maiming upwards of a dozen meat chickens.

The speckled hen, who every year, like clockwork, raises up a brood of sons and daughters of the roosters, to keep the flock populated.

At the death of Bernard II, I was content to let the hens run the barnyard themselves for awhile. After all, I thought, the roosters did seem to torment them a bit, herding them here and there, squawking and charging at them when they got out of line, and claiming their rooster-right whenever a poor hen looked appealing. And there was the crowing, that started at 4AM...let the ladies do their own thing, I decided, and prepared to sleep through the night peacefully.

Nick and I, feminists, assumed that the hens could indeed handle themselves. Alas, it was not to be. Without a rooster to keep them in line, the hens scattered all over the barnyard and the fields, in groups of two or three or even alone. They did not seek cover when a hawk flew overhead.  They did not head to the coop when the shadows grew long. I watched them from my bedroom window and sighed. It turned out that the paranoid bossiness of a rooster was necessary after all.

A hen wanders into a nursery.

We got twonew roos, actually, more sons of Bernie that we had outsourced to a relative as chicks (he had ended up with 3 hens and 5 roosters --way too many -- so we took two back). One was golden-topped and regal, with deep green tail feathers that trail on ground and sharp orange eyes: Bernard III the Golden. The other was white-topped and...well, goofy. His noises as he skitters around the barn resemble nothing so much as the "wakka wakka wakka" of fozzy the muppet, so he is called Fozzy the White.

Fozzy the White, King of Winter.

After knowing and fearing Bernie I so long, and how hot the blood ran in his veins, I was sure that these two roosters would kill each other within a fortnight. But they have persisted as co-rulers, through the easy days of summer and into the dark days, when they lived together in the coop and then, after the Great Storm of December, in the barn rafters where they still live in exile with their hens.

They lead the hens on their rounds throughout the day, first to the grain wagon to pick for bits of corn, then ambling around the barn in small groups to give the early morning layers time to settle into one of their known or as yet unfound nests to lay their gifts, then out to the distant compost pile, then to the drier pile near the sheep and rabbits, then back into the barn to pick up the grains spilled from morning chores, then to take dust baths under the barn, and so on. The Golden and the White often lead separate groups about, coming together for the most exciting events (the compost piles, usually), one of them keeping watch while the other scratches and searches.

Hidden nest! Behind the hay bale near the Scarsdale and Spotbelly's farrowing pen.

There is also Kirby, the third rooster. A fat white cornish cross, he is a meat bird leftover from the summer. He escaped on the last slaughter day and disappeared into the barn for a couple days, finally to be found sitting on a pile of feedbags. He was mercilessly picked on by the hens, and they still will not let him take a rooster-right with them, but he does now wander with the group when they are in the barn. He looks like a giant battleship compared to the egg-birds' slender frames. The Golden and the White ignore him. Sometimes I imagine that he is laying plans, and someday we'll find the beautiful roos gone under mysterious circumstances, and Kirby will be solemnly leading his harem about. 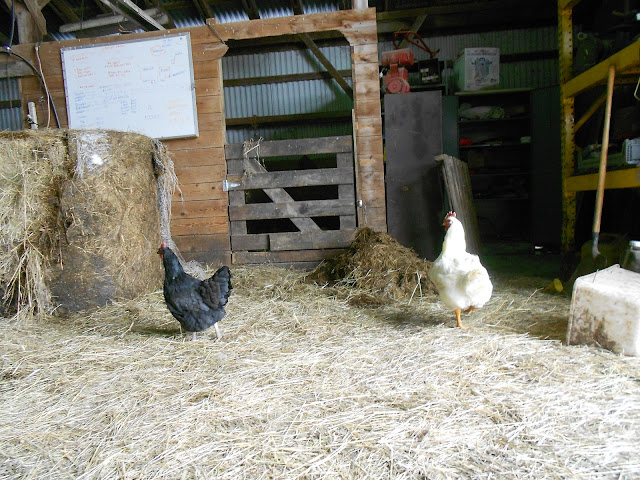