This is the time of the year, in the weeks when the birds go from silent to cacophonous, and the snow that has been our constant companion, sometimes a friend and sometimes a foe, finally relinquishes the land, and the sun is warmer than the wind is icy, this is the time for exploring our land. 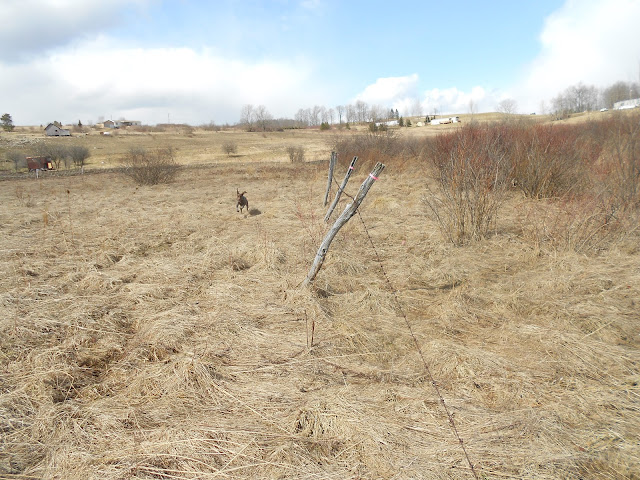 Can you find the flying puppy?

We own 30 acres; roughly 25 of them are pasture. Because of where the farmhouse is situated, halfway up the hillside, with the pasture lands sloping down and away and spreading across the valley, it is very easy to think that we can see the pasture from the bedroom window, and that we can investigate it by standing just outside the barn. We look at our land all the time. But very rarely, especially in the off-pasture season, do we explore it. After all, it looks pretty boring in the winter, white on white on grey; and in April, brown grass with some grey trees and reddish grey shrubs scattered around. 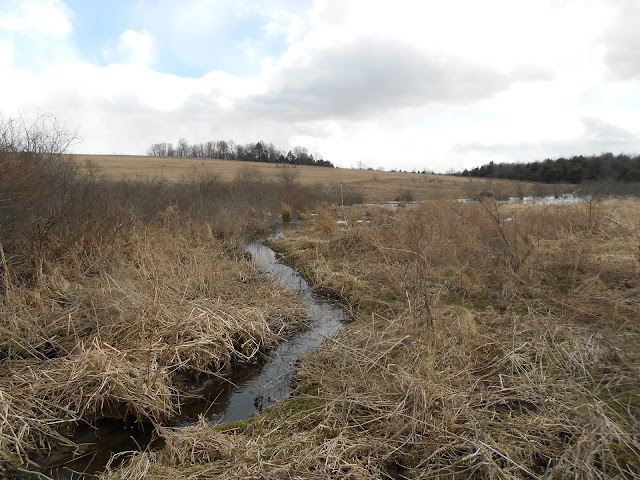 Brown on brown is pretty in its own way.

It is also easy to feel like it’s not that much land. Which it isn’t, especially in the Big-Ag world. We barely register to the farms around here, mostly dairies that own thousands of acres of land (to grow the corn and hay that they later drive to the cows -- the cows themselves, of course, are in barn complexes that take up only about 5 acres, including a large manure lagoon that is emptied routinely and, yup, driven to the corn and hay fields...).

But now that it’s the month of heavy prep before we hit the ground running on pasture and in the garden in May, it’s time to investigate how the land is recovering in the areas where we had stock last year, and to note any potential problems in moving stock in this season. And so, armed with the puppy and the camera and boots, I descended the hill. 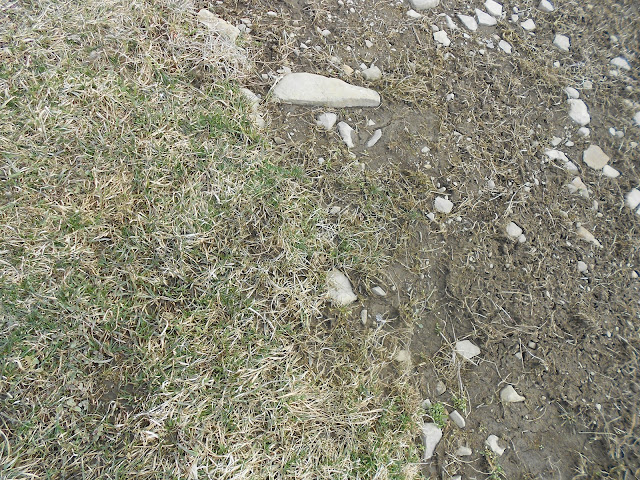 Last year we used temporary electric fencing to rotate the pigs through the pasture. We had about 60-70 pigs at the time, and moved them every week to ten days. The above spot must have been a place where we left them for a couple days too long; perhaps it was raining (not a good mix with electric fencing) or we were off the farm. It will need extra livestock-free time this spring, and I may have to reseed it a bit. 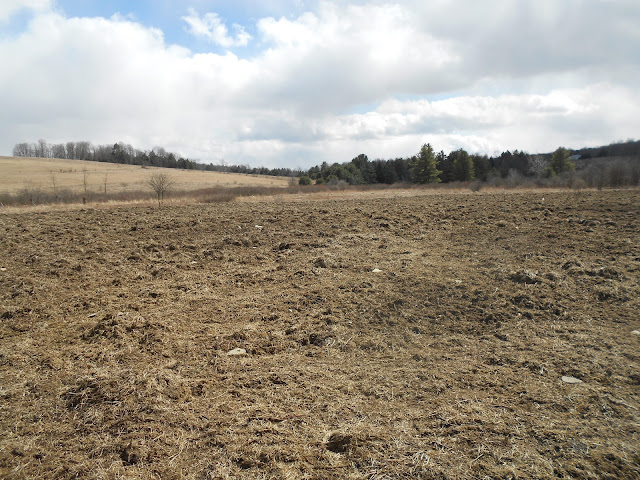 Here’s a section that looks perfect, seeing as it’s where the pigs were at the very end of the season last year in November. It looks like a tractor has run over it with a plow -- the sod is flipped, but not compacted, and there is still a hearty bit of root and grass and raspberry canes scattered about. This section we will probably leave as-is, with no seeding, and see how it recovers. 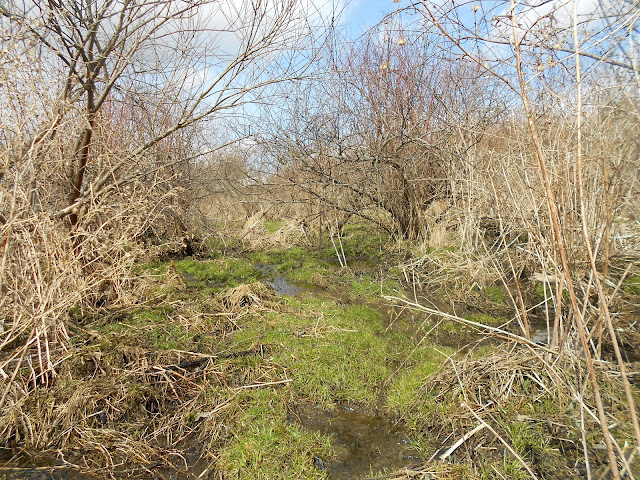 A nice wet-shady respite from August.

The majority of the land down here was unused last year. There are still some nice flat pasture lands. There are also a few acres of scrubby brush that we will use the pigs to clear paths through so we can access the area. There are two streams, babbling now, but that will be mostly dried up in August and September. There are some thickets and patches of old apple trees and pines. There are a couple swampy areas next to groves of hawthorns and crabapples that will be perfect for the herd in the hot months. Pigs hate the heat and don’t have much in the way of natural physical adaptations to deal with it; it’s just hard-wired in them to make wallows and sleep in the shade when it’s hot. For the farmers, it’s worth nothing the wet, shady areas now so we can set it up for the pigs wait out the hot months there. They will be happier, and the more comfortable they are the better they grow. Everybody wins. 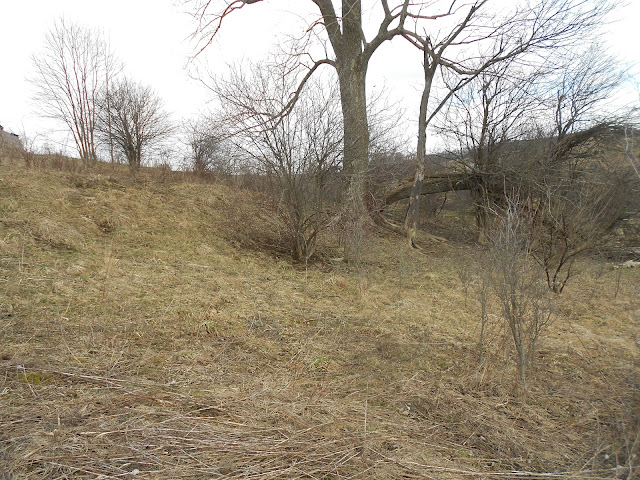 A big half-tumbledown tree with a grove of apples and raspberry bushes behind it.

Here’s a really great area just down from the barn -- shady, apple trees, cool mud and varied vegetation. I want to use this area for the breeder pigs in the hot months. Pregnant sows are even more susceptible to the heat than other pigs; if it gets much over 80 degrees they can miscarry or have a high number of stillborn piglets. This area will be cooler than the main breeder pasture, which is mostly sunny, and it is close enough to the barn to be able to move sows to and from the barn as they give birth and wean piglets. Knowing that the breeders will be there means I can plant in some sections of higher protein crops for pregnant mums to nibble on. 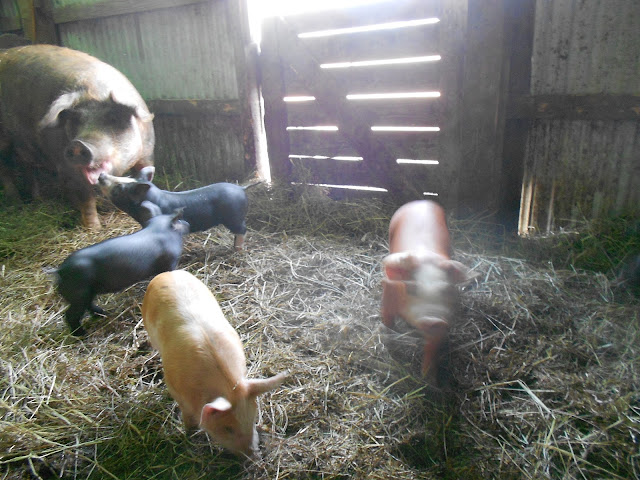 Scar and her brood anticipating the pasture.

For now, though, the only grass the animals are getting is last year’s. They like it well enough, although the warming sun is making them long for fresh ground. Not yet, though -- we will need to hold them off the pasture until probably the second week of May. It’s been colder than a usual spring, and while we would normally aim to have the animals out by May 1st, this year it’s going to take longer for the grasses and forage to get established. Hopefully, the pigs will be patient. 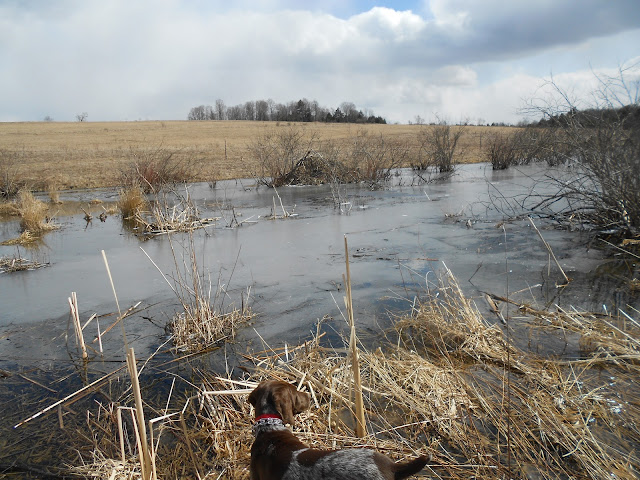 We also investigated this beaver lodge in the middle of a beaver lake. Dart isn't quite sure what to make of it.